Junior defensive end Jonathan Garvin acknowledges the Canes familiarity with UNC but noted the change at quarterback with freshman Sam Howell starting. The Tar Heels offense is coming off 483 yards of total offense and will not be lacking confidence.

“They are gonna come out, they are gonna grind like any other team, they gonna give all they got,” said Garvin. “They have a new quarterback, we gonna sit and take the time to watch him.”

The Tar Heels did not quit on Saturday, going into the fourth quarter down 11 points and scoring 2 touchdowns for the come from behind win.

Experience the Hurricanes gained from their four-quarter battle against Florida will definitely help them against UNC in regards to playing a full game. 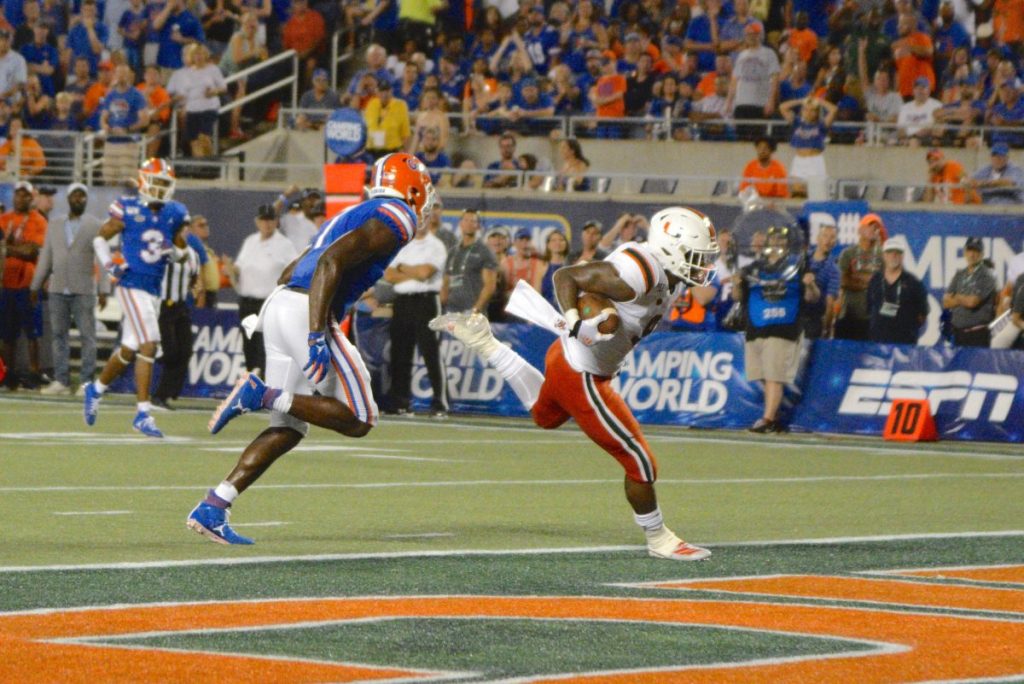 Fans, coaches, and players love to see the turnover chain, but for Manny Diaz what’s most important is what the team does after the change in momentum.

“Our team goal is not get more turnovers, it’s points off turnovers, what matters is what you do with them.” Diaz said. “We turned Florida over four times and got three points out of it, Florida turned us over once and got seven.”

A major point of emphasis is scoring the football and when the defense is able to capitalize on mistakes by the opponent it is key that the offense can score.

In order for the offense to score more points one of the biggest areas of growth and improvement will need to be the offensive line. Against Florida, the Canes offensive line gave up 10 sacks. Being sacked 10 times will rattle any quarterback, especially one making their first career start.

“The biggest thing is when the pocket does breakdown and you go to the next play, you still gotta trust the pocket, because that next play you might have a big play,” Williams said.

Williams understands after his first action of the season that every play is a new play and he needs to trust the offensive line even after a loss of yardage.

“We certainly don’t feel like we protected well enough, and we didn’t,” Enos said.

True freshman Zion Nelson and redshirt freshman John Campbell Jr are a few of the many young players starting for the Hurricanes and head coach Manny Diaz is not losing confidence in them after one start. 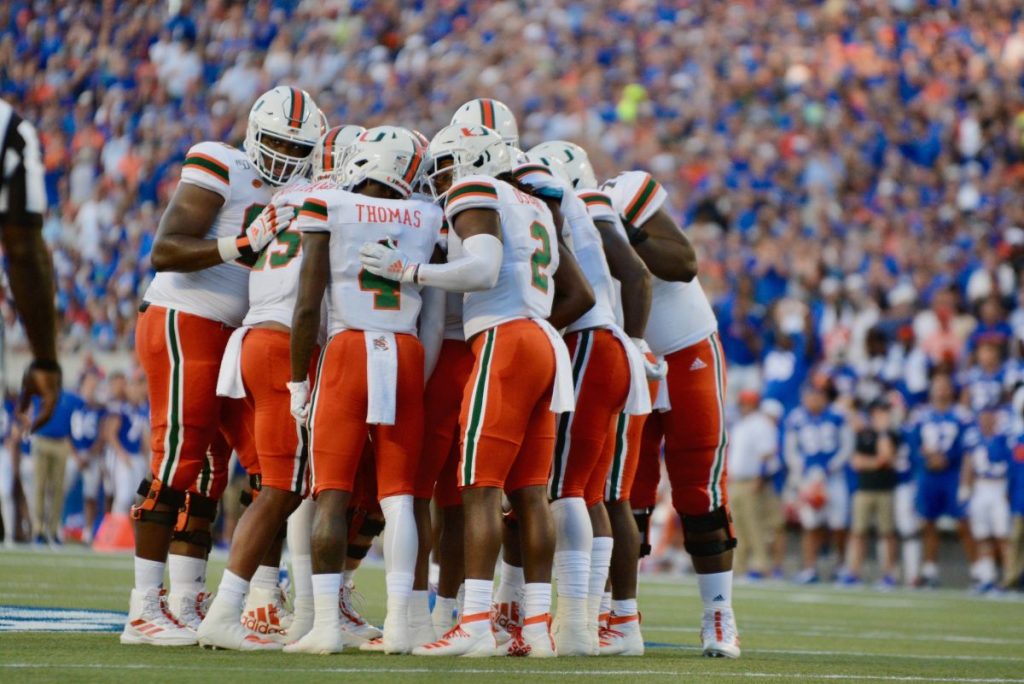 The Hurricanes offense huddles up to coordinate their efforts against the Florida Gators Aug. 24 in Orlando. Photo courtesy Haylee Blitch

“Those are our guys, and let me tell you something, they never flinched, they never blinked, they got beat, and that’s gonna happen, it’s hard to play as a true freshman in that setting,” Diaz said. “I’m proud of the way those guys did, it will be fun to watch those guys develop.”

As a true freshman offensive lineman Navaughn Donaldson started in 10 games. Donaldson is a prime example of how young players can develop by playing early on. As a junior Donaldson will be anchoring the offensive line at left guard serving as a leader and mentor to younger players having started in 23 career games.

“As an offensive line we need to come out with a strong gameplan, follow our rules, and make things happen,” Donaldson said. “I’ve been in that situation myself, being a young guy on the field, I feel like after the first few plays the nerves go away, and that’s when you start to get calm, as the game goes on it just feels like a regular practice.”

The Hurricanes offense looks to bounce back Saturday and help the team pick up their first win of the season.

Game day preview: UM vs. UNC
Hurricanes looking to get back on track in home opener