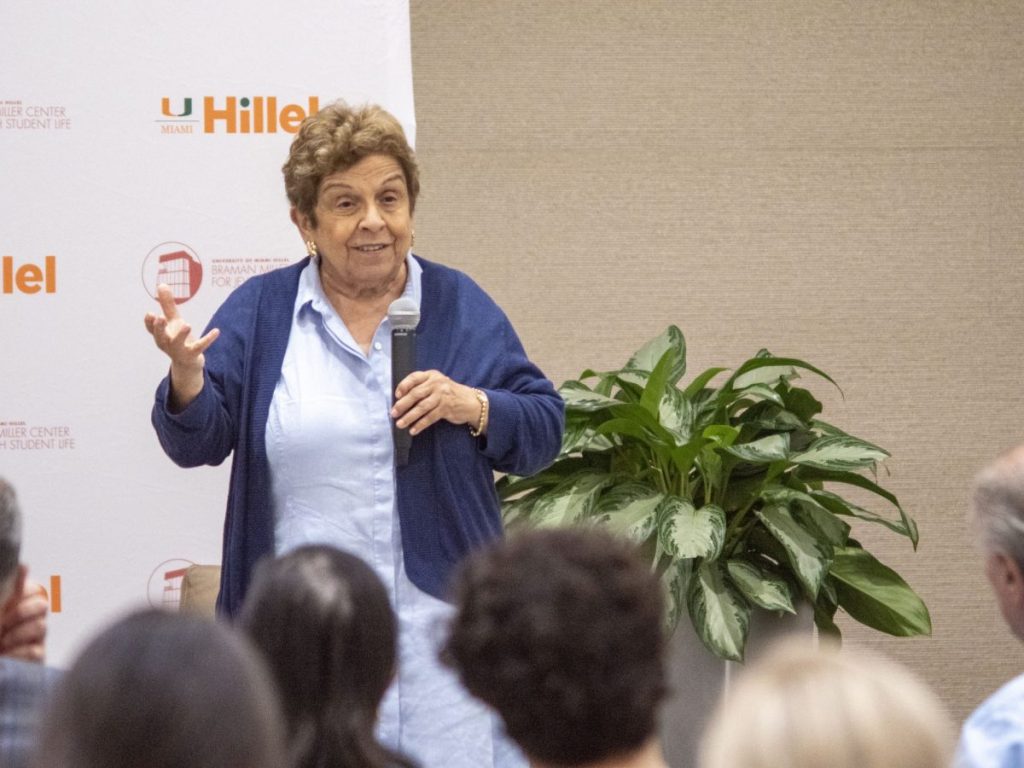 Congresswoman Donna Shalala, D-Florida, still remembers her earlier years as the first female president of the University of Miami.

Walking around campus, she noticed a lack of student interaction and thought, “This campus just does not feel like a residential campus,” Shalala said.

In her first year of being president, Shalala began to transform the school in phases, beginning with the addition of chairs, tables and patios.

“I found it so admirable that even in the high position of president, her attention to detail and dedication to a job that seemed below her pay grade was as committed as any other decision,” said Spencer Schwartz, a junior majoring in nursing.

After her time at the university, Shalala took the same determination that she brought to UM and ran for public office in 2018. Today, she holds a seat in the House of Representatives for Florida’s 27th Congressional District.

On Aug. 27, 2019, Shalala returned to the university to speak at the Braman Miller Center as part of UM Hillel’s Women Empowerment Series. She touched upon a range of subjects, including her identity as an Arab-American woman and her time in Congress.

Shalala, who came from a family of Lebanese immigrants, recalled how her grandfather arrived in the United States with only $7 in his pocket.

Shalala’s career on Capitol Hill has allowed her the opportunity to make a change nationally.

She briefly spoke about public policy issues like health care and climate change. Shalala also elaborated on legislative bills she is working on. Her favorite one, she said, is regarding student debt and making it more transparent.

A big part of the night was discussing U.S. relationships with Israel.

Shalala had recently returned from a trip to Israel with other freshmen members of Congress and said she was “disappointed in [her] trip to Israel that [she] didn’t hear a lot about a two-state solution” between Israel and Palestine.

In response, Jonah Karsh, a sophomore in the Frost School of Music, said, “I was happy to hear Congresswoman Shalala state her support for a two-state solution to the conflict. However, she did not exactly address the occupation itself. As a Jew, I find the occupation to be not just a human rights crisis for Palestinians but bad for Israel’s security and future prospects for peace.”

Other students were more pleased with Shalala’s comments and her overall stance on Israel.

“I appreciate the fact that she has co-sponsored and voted in favor of legislation that supports a strong U.S.- Israel relationship,” said Allison Schwartz, a senior majoring in political science and international studies. 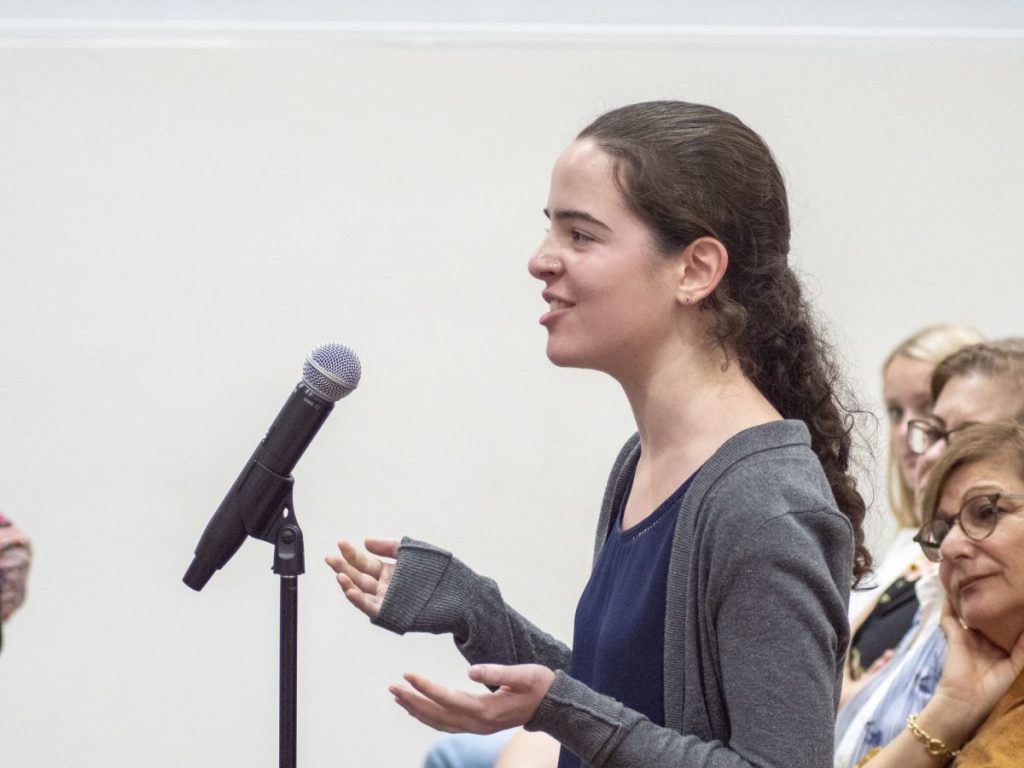 Julie Topf asks Congresswoman Shalala a question during the open discussion portion of the event.

At the event, Shalala also spoke on the topic of bipartisanship, something she considers less of an issue than the media portrays it to be.

“It’s less partisan than you think. You hear from our leaders; you know the sharp language. But we walk across the aisle all the time,” Shalala said, referring to how Democrats and Republicans often work together on bills.

Shalala also said she likes to focus on a transformative agenda rather than negative rhetoric such as talks of impeachment, which was met with great applause.

“I want to talk about the bills we’ve passed- which are impressive- because I want to make a case that makes a difference, that you elect people like me to Congress, that we actually get things done,” said Shalala.

Even though she discussed a variety of issues, Shalala did not fail to circle back to the central theme of the Hillel event- women empowerment. She commented on the immense progress the current generation has made regarding the topic and said, “It may not feel that way, but the truth is, your generation has linked up better than any generation I know.”

In U.S. politics specifically, there are more women in Congress now than ever before.

“We think we’re taking over the world,” she said. “Frankly, we’ve given the Democrats the majority.”

Many students said they believe Shalala was a good fit to be a speaker at a series highlighting women empowerment because of her past and present roles.

Alexa Shabinsky, a junior majoring in broadcast journalism and current president of UM Hillel, said she was inspired to hear that Shalala believes the glass ceiling is on the verge of being broken.

“Congresswoman Shalala opened my eyes to what the future is like for females,” said Shabinsky. “Women like her are the reason we are seeing more female leaders today.”

Freshman Madeline Joyce, majoring in political science, described Shalala as “extremely influential” because of her various roles in government.

However, what people think about Shalala regarding her political beliefs differed.

Joyce said she likes that Shalala seems like a more centrist politician, allowing her to “work alongside politicians from across the aisle.”

Karsh, on the other hand, thought differently. While he said it was “heartwarming to hear a politician who genuinely cares about her younger constituents” and supports some of her bills such as raising the minimum wage, he said Shalala is too centrist.

“As a progressive Democrat who understood the necessity of Democrats taking back the House of Representatives in 2018, I went door to door campaigning for Shalala. That said, Shalala is a fairly centrist Democrat for my taste. I wish she would come out in support of the impeachment of President Trump, and I wish she would speak out more against Israel’s occupation of the West Bank, which is a human rights issue particularly close to my heart.”

Grace Harrington, a junior political science major, has “complete confidence in [Shalala’s] success to pass bills and appropriate the funds.” But, regarding Shalala’s student debt transparency bill, Harrington believes the issue is much more pressing and that the debt should be eliminated overall.

“I’d rather not have loans than get a monthly email on how much I owe,” she said.

Overall, the event garnered attention from students from all around campus.

Igor Khokhlov, executive director of Hillel, deemed the night a success and really liked “the fact that there were a lot of students in the crowd.”

Khokhlov invited Shalala to speak in the series not only because of her past and current positions but because of her personal connection to Hillel and UM. “We wanted to bring her back to campus because she is loved by students,” said Khokhlov.

Schwartz described her as undeniably likable because of her charisma and sense of humor.

“She is a woman that everyone can connect with, regardless of political affiliation,” Schwartz said.