Taking animated source material and turning it into live-action reboots is nothing new; however, over the last few years this trend has significantly increased. While some clamor that they signal a lack of original content, others welcome these reboots with open arms, mainly to examine the new spins that filmmakers give to updated adaptations of cherished media.

Disney’s latest live-action reboot, “Aladdin,” hit theaters May 24. One of the main changes in the new film is the transformation of Princess Jasmine, played by Naomi Scott. TMH sat down with Scott to discuss this modern iteration of her character.

From her first step through the door, Scott was bubbly and excited to discuss the film. Her emphasis while acting, she explained, was to show that Jasmine is a part of a royal family, meaning that she is not only a natural-born leader, but also an intelligent young woman.

“I wanted to make sure that there were moments in the movie where she displays skills of leadership,” Scott said. “She’s doing it because she cares and she knows she has what it takes.”

Because of her gender, Princess Jasmine is not given the power that her title merits. Instead, she is treated as a mere pawn whose marriage can be used for her kingdom’s political gain. However, refusing to adhere to the path set out before her, Jasmine actively rallies against the sexist discrimination, becoming more involved with the matters of her kingdom. She is aware of her own worth, confident when it comes to decision making and fearless in her fight for leadership. 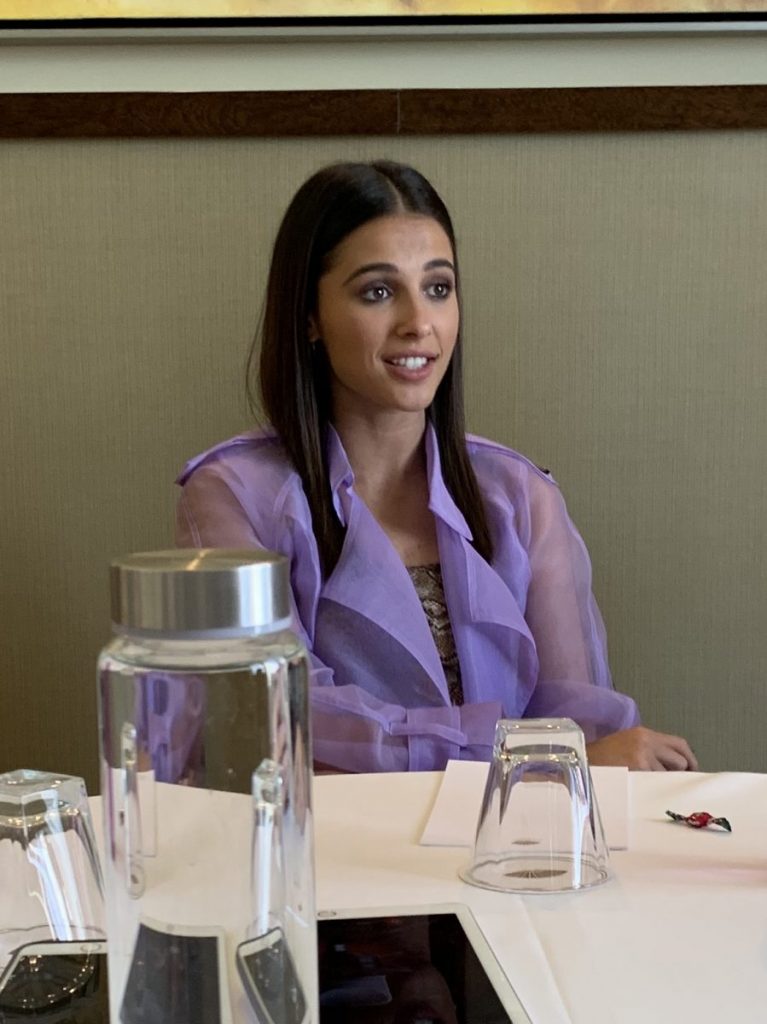 This is a major shift from the 1992 original, in which Jasmine is primarily arguing for her own right to choose who she will marry. Romantic love is the main focus of the animated version, while the new story also places emphasis on Jasmine’s love for her people.

“She’s fighting against injustice for everyone [and] the freedom for her kingdom, which is a really cool change and also makes her more ambitions and even more looking outside of herself and her own situation,” said Scott. This modern Jasmine not only fights for herself, but recognizes her position and fights for those under her care, she said.

However, this is not an easy feat, even for a princess. One of the 2019 film’s new songs, titled “Speechless,” features Jasmine singing about how she refuses to be silenced in the face of adversity and doubt.

“It’s realistic in the sense that sometimes you’re going to speak out against something and you’re going to get backlash, but you might just open the door for someone else along the line,” Scott said.

Scott also said she aimed for a powerful performance while delivering the lyrics, demonstrating Jasmine’s resolve to overcome the odds.

“I definitely had a vein popping out,” Scott said. “I wanted to make it roar. I didn’t want it to be a pretty performance.”

Another important aspect of Jasmines character is how she embraces her own femininity. She is not ashamed of her title as a princess, instead recognizing the influence and authority that comes with it, Scott said.

Scott said she hopes that audiences come out of the theaters with “the idea that strength always comes out of struggle.”

“There’s this idea of feminine qualities that society has said that don’t mix well with leadership,” she said. “Actually, I think the complete opposite. I think everything that makes us a woman, whatever falls under feminine characteristics… are things that leaders need, especially in this time.”

As royalty, Jasmine is a natural leader for her people and she works hard to make the most of her rank, offering insight and understanding. Her character offers an essential example of coexistence between the feminine and the legislative.

A woman can wear a dress and still hold a position of authority, the two are not mutually exclusive, as illustrated by Princess Jasmine.

“The strength that we have as women, we need to realize it and understand it and use it,” said Scott, who also said she hopes her performance inspires this inner strength.