No. 17 Miami falls 12-3 to Duke despite McKendry’s return 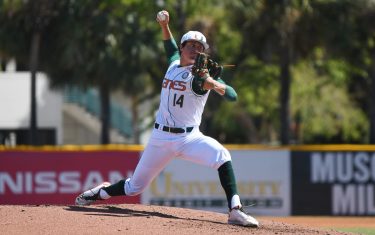 Right-hander Evan McKendry fires home during his sophomore season in 2018. McMahon allowed two runs on one hit and three walks in just 3 1/3 innings pitched May 17 at Mark Light Field. It was McKendry’s first start since April 19 due to injury. Photo credit: Josh White

Hurricanes ace Evan McKendry made his first appearance Friday since April 19, when he left after just one inning against then-No. 8 Louisville due to elbow tightness.

The junior right-hander cruised through his first three innings but ran into trouble in the fourth.

After a quiet offensive showing the night prior, the Duke Blue Devils pounded No. 17 Miami, 12-3, at Mark Light Field.

“All in all, a very ugly game,” UM head coach Gino DiMare said. “We just could never get anything going and far and away the worst managed game in my short career so far. Just not a very good game and I’ll take full responsibility for it. Just a poorly managed game and a poorly played game.”

The Blue Devils jumped out to an early lead with a five-run inning in the fourth, aided by two UM errors.

After quickly recording the first out, McKendry walked the next two batters on just eight pitches.

DiMare motion for junior sidewinder Mark Mixon, who struggled to answer the call.

On Mixon’s first pitch, Duke left fielder Kyle Gallagher chopped a groundball up the third-base line. Mixon fielded the slow roller and fired it past Hurricanes’ first baseman Alex Toral down the right-field line, allowing one run to score.

And the Blue Devils capitalized on the defensive miscue.

Sophomore southpaw Jeremy Cook replaced Mixon but could not to limit the damage.

Cook threw a wild pitch to the backstop, plating a run and Anthony Vilar was unable to field a groundball to his right side, extending the Duke lead to 5-0.

Miami third baseman Raymond Gil smacked a solo shot in the bottom half and right fielder Adrian Del Castillo drove in a run with a sacrifice fly in the fifth, cutting the deficit to three.

However, the Blue Devils offensive parade continued. Duke scored seven unanswered runs, including five in the eighth aided by another Miami error.

“The game got away from us there,” DiMare said. “Tried to fight back a little bit but every time we scratch a run they put up big numbers. They had two fives and every time we’d score and they’d score.”

Sophomore Matt Dockman (5-1) tossed two scoreless innings out of the bullpen to register the win.

Miami will conclude its regular season Saturday against the Blue Devils. First pitch is scheduled for 1 p.m.

“We had a rough night tonight but tomorrow is a new day and that’s the beauty of baseball,” Gil said. “We have a day tomorrow to make it up and win the series.”