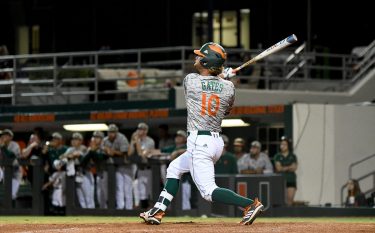 JP Gates smacks a two-run single to right field to put the Hurricanes ahead, 10-7, May 4 at Mark Light Field. Gates finished with three RBIs in No. 21 Miami’s 12-7 victory over Bethune-Cookman. Photo by Josh White

It was not pretty, but the Hurricanes got the job done.

Miami committed four errors against Bethune-Cookman, but the Hurricanes’ offense bailed out Gino DiMare’s squad from being upset Saturday evening.

No. 21 Miami scored five runs in the eighth inning to defeat the Wildcats 12-7 in front of 2,266 fans at Mark Light Field.

“We’re happy to get the win,” DiMare said. “It was a little bit of a sloppy game from a defensive standpoint and we walked too many guys but, all in all, we did what we needed to do to win the game. They’re not always going to be pretty.”

Fittingly, the difference in the game came down to a Bethune-Cookman defensive miscue.

With bases loaded in the eighth, senior right-hander Tyler Krull threw a wild pitch that ran to the backstop, plating freshman Jordan Lala to push the Hurricanes in front 8-7.

“It kind of relaxed me a little bit,” Gates said of the wild pitch. “I was not as stressed and they had a base open in case they wanted to put me on and get to the next guy. It was just about putting a ball into the field of play, but that kind of eased me down a little bit.”

Adrian Del Castillo, who is nicknamed “Caballo” shined on the day of the 145th Kentucky Derby. The freshman catcher, whose nickname means “horse” in Spanish, tallied a career-high four hits, including two doubles, and drove in a pair of runs.

“He’s a machine, an absolute hitting machine,” DiMare said of the freshman phenom. “His swing is so efficient, it’s hard for him to not hit the ball hard. It just stays on the plane for so long. It’s such a flat swing and he has a quick bat and he’s a tough guy, a tough-minded guy. He’s got all the attributes to be one of our all-time great hitters.”

Del Castillo’s extra-base hit in the sixth put Miami up 7-6 before Bethune-Cookman (16-34) ultimately tied the game 7-7 the next inning.

The Gulliver Prep product opened the scoring for the Hurricanes as well with an RBI single to center in the third inning, cutting the Wildcats’ lead to 2-1.

“I’m just staying relaxed up there and seeing the ball,” Del Castillo said. “The last few games I’ve been anxious so I just calmed it down and let the pitch come to me and got a good pitch to hit.”

Bethune-Cookman jumped out to an early 2-0 advantage with a pair of runs in the top of the third.

But the Hurricanes’ offense quickly responded.

The Hurricanes added two more runs in the fifth thanks to RBI base hits from Gates and Toral to extend the Hurricanes’ lead to 6-2.

“It just says that the guys aren’t going to bury themselves,” DiMare said of his team’s resilience. “There’s a different vibe on the team this year. Certainly one of them, and there are a lot of them, but one of them is that we feel like we can score runs and that’s a good feeling to have as a team.”

The Wildcats capitalized on Miami’s costly errors one inning later to tie the game.

Freshman right-hander Slade Cecconi struck out two of the first three batters he faced in the inning, but Bethune-Cookman took advantage of Cecconi’s throwing error.

Wildcats’ first baseman Joseph Strong chopped a ball in between home plate and the pitcher’s mound. Cecconi fielded the ball and tossed it over Toral’s head and down the right-field line, scoring junior Over Torres from second base.

Junior designated hitter Silas Grinstead, who entered Saturday with just three hits in his first 45 at-bats, followed with a three-run blast over the left-field fence to even the score at 6-6.

Cecconi, who made his third career weekend start, surrendered six runs, only one earned, on eight hits across 5 2/3 innings. The 6-foot-4, 212-pound hurler tied a career-high with nine strikeouts in the no-decision.

“There’s no panic,” DiMare said. “We’ve got to find a way to score more runs and keep swinging the bats. We’re not done scoring. There’s still a lot of game left, which there was, and that’s the feeling you get in the dugout.”

The Hurricanes will look to extend their winning streak to seven games in the series finale against Bethune-Cookman Sunday. First pitch is scheduled for 1 p.m.

An ode to the art storytelling
No. 17 Miami falls 12-3 to Duke despite McKendry’s return