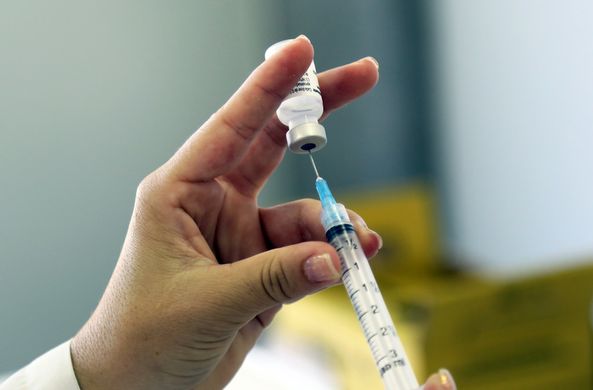 For years, measles was considered a horror of the past for Americans; however, the disease is now making a comeback. In fact, there have been around 500 reported cases of the viral infection in the U.S. since the start of this year.

With the majority of the outbreak concentrated in the ultra-orthodox Jewish neighborhood of Rockland County, New York, the New York City Mayor Bill de Blasio declared a public health emergency. In light of the outbreak, he has enacted mandatory vaccinations, sparking debate over individual rights versus public safety.

According to the Centers for Disease Control and Prevention, the highly-contagious disease begins with symptoms of a common cold such as a cough and fever. But as the illness develops, a painful rash spreads all over the body.

Measles is preventable through the measles, mumps and rubella (MMR) vaccine, which the overwhelming majority of health professionals agree is safe and effective. The vaccine has been successful in significantly reducing the number of measles cases in the United States, but measles are still common in many other countries.

The University of Miami has a vigorously enforced vaccination policy to prevent any severe outbreaks on campus.

If students fail to comply with the university’s immunization policy, they are prevented from registering for classes until the required immunizations have been verified.

On the national level, there is a growing fear in different communities surrounding vaccines and the belief that they cause severe, life-threatening side effects. This has, in turn, led many parents avoid vaccinating their children. These activists, known as “anti-vaxxers,” make up a vocal group with a growing following.

“Many years ago, there was a study that linked vaccines to autism; however, that study was disproven,” sophomore Gabrielle Butman said. “Even though it was disproven, people continue to believe that there is a correlation even after hundreds of countless studies saying there is no link. Vaccines protect people from life-threatening diseases, and those who refuse to get vaccinated are allowing for these illnesses to come back.”

Additionally, some of these anti-vaxxers cite religion as a reason for refusing to vaccinate, which is the rationale for the ultra-orthodox communities that caused Mayor de Blasio to declare a public health emergency. They say the measles vaccine is not kosher.

To account for a student’s religious and medical concerns surrounding a specific immunization, UM offers a vaccine exemption under certain circumstances.

“Students can request an immunization exemption for medical or religious beliefs,” Anapol said. “When students request this waiver, we require a blood test to assess for immunity and their signature confirming that they understand that they may be restricted from campus in the event of an outbreak.”

Currently, there are 41 students enrolled at UM who were granted immunization waivers for medical or religious reasons.

However, some students feel that the safety of the public should outweigh an individual’s right refuse vaccination, especially considering the high volume of students who live in close proximity to one another on campus.

“Everyone is always sick at the same time,” said sophomore Tiana Torkan. “Germs tend to spread very quickly around UM. But I can live with having to listen to people coughing in my lecture hall or catching the cold from my peers. What I am not okay with is the thought of dangerous, preventable diseases being spread around on my campus.”

There have not been any recent reports of dangerous illnesses on campus, but UM medical staff are remaining vigilant and continue to educate students on the benefits of vaccinations.

“We are following reports of measles outbreaks and will adhere to CDC and Department of Health recommendations, if issued, and are continuing to enforce immunization requirements,” said Anapol.