Home » Prather reflects on time spent on the court

Prather reflects on time spent on the court 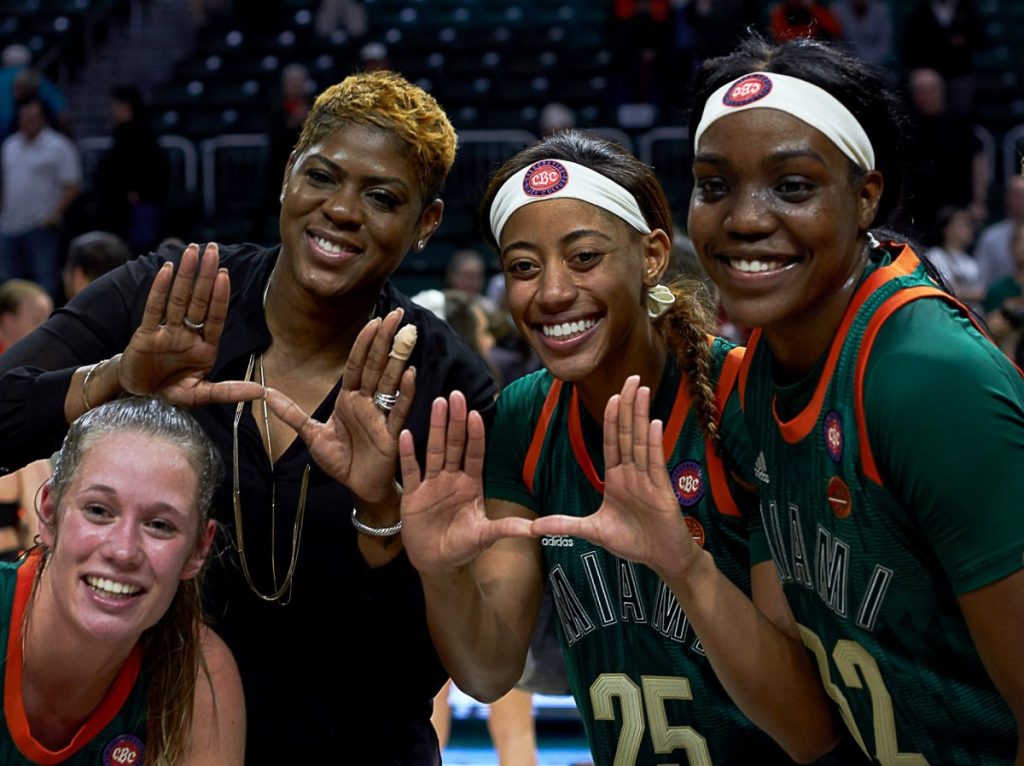 Khaila Prather paused and stared at her home court.

That floor was a place where she spent five years building relationships, creating countless memories and watching the formation of a top Atlantic Coast Conference women’s basketball program.

“I can’t even think about it right now,” Prather said, fighting back tears.

The building was once known to her as the BankUnited Center. Now her teammates call it the “The Wat.”

But the road to where she is today was not always apparent. Prather, who grew up in Upper Marlboro, Maryland, loved track. She only started playing basketball in high school because of her brother, Craig Prather, Jr.

“My brother played every sport,” Prather said. “I just followed behind him because he wanted to play basketball.”

But the sport was always in her DNA.

Prather’s father, Craig, attended the U.S. Naval Academy and played alongside NBA Hall-of-Famer David Robinson. And when she stepped onto the court, she knew basketball was her game.

“I fell in love with it,” Prather said. “Ever since then, it’s been a consistent thing in my life.”

With that, she began to enhance her game, and Hurricanes coach Katie Meier took notice. Meier met up with Prather and former UM standout Erykah Davenport on the same recruiting trip.

“I was like, ‘Wow, this program just got ten thousand times better in terms of quality in character and how fun it’s going to be to have this journey with them,’” Meier recalls after Prather and Davenport’s commitments.

Prather’s dedication to the sport paid off when she officially became a Miami Hurricane. The 6-foot-1 forward saw action in every game throughout her freshman and sophomore seasons.

However, during an ACC tournament game in her junior year, something went wrong. Prather sustained a major injury in her left leg: an ACL tear.

She was sidelined for her true senior season, prolonging her college career. But Prather found a silver lining within the struggle.

“I probably learned more about myself then, than I have ever before,” Prather said. “It made me appreciate the game more.”

Prather was not the only Hurricane who suffered a season-ending injury. Later in 2017, guard Laura Cornelius also tore her ACL. Cornelius joined Prather on the bench for the 2017-18 season, sparking a newfound relationship.

“Laura was my ACL rehab buddy,” Prather said. “We were kind of delayed on our rehab, so I was pushing her during the times when she had to go through that really tough stage. And then, when I was going through the rough stage, she really helped me out. That support system was awesome.”

Prather and Cornelius grew closer and became leaders from the bench.

“We both really don’t speak about our feelings and it was a tough time to be injured,” Cornelius said. “It is easier to understand someone when you are going through the same stuff. I still call her my ACL buddy because we grew closer together for sure.”

Although Prather’s injury came prior to Cornelius’ torn ACL, she experienced a recovery setback and could not join the Hurricanes at the start of the 2018-19 season.

However, later in the year after missing 50 games, Prather returned to the court in a competitive game for the first time in 670 days.

“Many of our teammates, the fans, the coaches were not there when we were in the training room doing hard exercises,” Cornelius said. “We were there. It’s something special that we were bringing into this season.”

Tremendous amounts of passion and effort brought Prather back onto the floor. She became the first player in Miami history, male or female, to be a part of five NCAA Tournament rosters.

“She’s been significant in terms of how people perceive our program on this campus or nationwide,” Meier said. “She’s just the classiest individual and everyone has so much respect for her and then that reflects well on the entire program.”

While Prather may not be sporting the orange and green on the hardwood next year, she will be finishing up her public health degree at UM.

She’ll be in the crowd, staring at the court, and watching her team forge new relationships and memories.

“You can coach 50 years and never have the journey I’ve had with her,” Meier said. It flew by and I’d do it all over again tomorrow.”