Home » Renovations to School of Architecture building cause mixed responses

Renovations to School of Architecture building cause mixed responses

The University of Miami School of Architecture Building 48 is currently undergoing minor renovations in order to meet mde safety standards. The work is expected to be finished sometime in May.

The changes are to be implemented in a way that retains the original look. Building 48 is the most recent building in the School of Architecture to get new impact-resistant windows. Other than new windows and the possibility of new flooring, nothing else is expected to change.

Students and professors have been divided on whether or not the old buildings in the School of Architecture should be preserved, renovated or replaced.

Jean-Francois Lejeune, a professor in the School of Architecture, supports keeping the old buildings preserved to the extent of making the new windows in Building 48 look as similar to the old ones as possible.

“The City of Coral Gables agreed with us that if we wanted to put new windows, we have to match them as much as possible,” Lejeune said. “It’s kind of expensive and what the university wanted to do originally was much cheaper, but maintaining the proportions of the old window frames was critical for the preservation.”

Lejeune explained why these buildings are of historical significance to the City of Coral Gables and the University of Miami campus, saying the buildings were apartments for soldiers returning home from World War II and receiving benefits from the GI Bill.

“It’s a unique case because these are the first housing being built on this campus when it first reopened the end of the war,” Lejeune said. “It’s also a rare example of apartments targeted for GI Bills on a private university.” 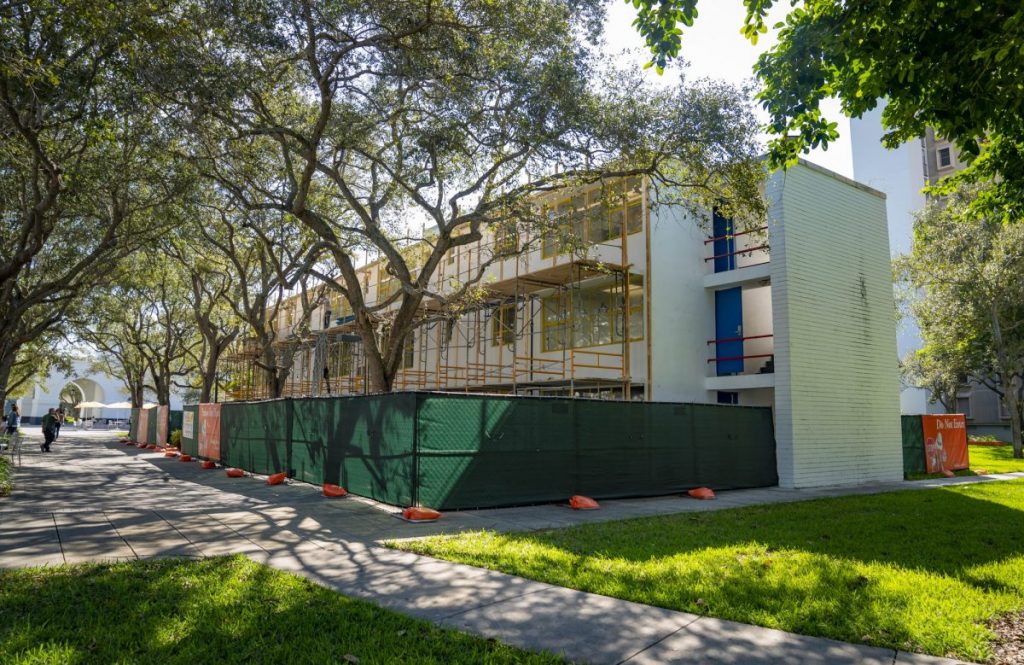 Renovations began over winter break on the exterior of the architecture studios. The traditional window frames are being replaced with lighter, hurricane-resistant versions. Hunter Crenian // Photo & Visuals Editor

Despite their historic significance, a fair amount of people do not care for the old studio buildings.

Sabrina Abroud, a graduate student in the School of Architecture, agreed that the old studio buildings should stay, but also said they need substantial renovations on the interior and exterior.

“It is a paradox that the School of Architecture doesn’t have the authority to change the architecture buildings on campus,” Abroud said. “And that I think is a shame because there is a lot that could be done to make it more relevant to life on campus to the conditions under which students can find inspiration to work.”

Troy Gulec, who is also a graduate student in the School of Architecture, expressed a similar opinion.

“I don’t really have much to say about the shoebox buildings,” Gulec said. “It’s interesting that we’re in the School of Architecture and the buildings are pretty unimpressive. It’s great that they want to preserve them, but if you do preserve them you can do some type of contemporary rehabilitation of them.”

Mario Ostolaza, a graduate student in the School of Architecture, admits he initially disliked the architecture buildings, but learned to appreciate them because of their historical significance.

“Miami is a new city compared to the other cities in other states, so that the fact that they are trying to conserve these kinds of buildings is important,” Ostolaza said.

“With the new dorms going up, I think they have to tear them down and put something new up or at least change the look on the outside because it looks kind of old and dirty,” Degan said.

“It looks awful, like a crayon was taken to it,” Degan said. “It looks like little kids picked the colors.”

Lejeune said the window frames’ colors are intended to match the Bauhaus buildings in Germany and the Netherlands, which is something that true architects would notice.

“This is the 100th anniversary of the foundation of the Bauhaus in Weimar,” Lejeune said. “When architects come here, they say, ‘hey, they look at the Bauhaus buildings.’ In reality, they have nothing to do with the Bauhaus buildings in terms of construction, but in the design, there is something about white flat walls and the colors specifically that connect it to that modern architecture.”

Lejeune acknowledged that not everyone is a fan of the yellow window frames and the decision required convincing.

“It’s purely an architect decision,” Lejeune said. “The university has never really liked it. But now I think they’re okay with it because that’s going to happen to the new housing.” Lejeune said.

Despite the mixed viewpoints, the studio buildings are unlikely to substantially change anytime soon. This is mainly because many architecture professors strongly believe the buildings should remain intact due to their historic significance and because they were officially declared historic by the City of Coral Gables.