Home » Van Belle used to pick weeds from the outfield, now he stars on the mound

Van Belle used to pick weeds from the outfield, now he stars on the mound

The Pembroke Pines, Florida native is not a natural flamethrower like his counterparts on the starting staff. Rather than lighting up the radar gun, Van Belle uses command and movement to get outs.

And just like his pitching style, Van Belle’s journey to the University of Miami was different from those of his teammates.

Van Belle attended Archbishop McCarthy High School, one of the many powerhouse baseball schools in South Florida. Yet, he had to work his way up to even play at the varsity level.

“I wasn’t the type of kid to start on the varsity team since freshman year,” Van Belle said. “I kind of made my way through the ranks and then just learned about the culture of the team.”

When Van Belle reached the varsity team, he had only one goal on his mind—receiving a scholarship from an NCAA Division I university.

However, Van Belle’s physique was a major roadblock.

“He was a twig,” former Broward College Seahawks coach Ben Bizier said. “He was scrawny and not developed.”

Van Belle stood at 6 feet tall and only weighed 140 pounds, scaring off many collegiate programs. 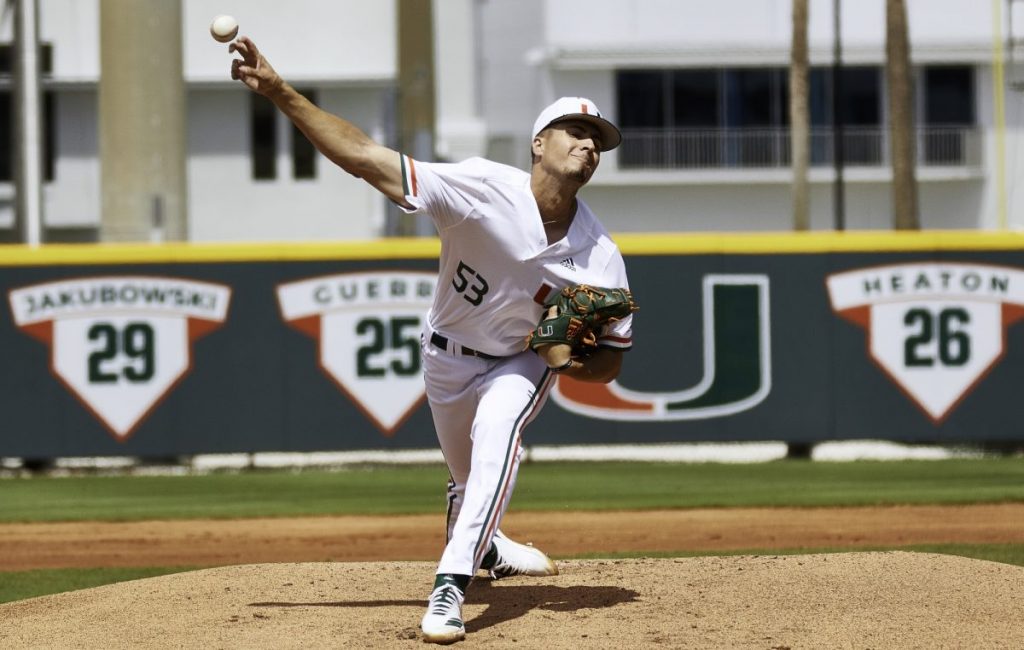 “We sold him on how we could change him and make sure he was on the mound,” Bizier said.

After contemplating his options, Van Belle committed to Broward College in the late fall of his senior year of high school.

But it was clear that attending a “JuCo” was not the ideal situation for Van Belle.

“I wouldn’t say it was rock bottom, but it’s very gritty,” Van Belle said. “You can’t take anything for granted. My freshman year, I will never forget every day before practice. We had to pick 12 weeds out in the outfield before the day started. You had to fix the mound yourself. Nothing is done for you.”

Instead of stylish Adidas jerseys and jackets, Van Belle wore a plain Hanes T-shirt that read the word “Broward” on it.

Being a pitcher at a junior college was never lavish, but things got worse for Van Belle.

“I just threw a pitch and noticed that my elbow had popped,” Van Belle said. “I knew I had to get surgery, and from then, I knew it was going to be a grind.”

The right-hander had Tommy John surgery and was forced to sit out his first two seasons with the Seahawks.

All Van Belle could do was patiently wait and support his teammates, but there was a light at the end of the tunnel.

Through his recovery and training, Van Belle came back for the 2018 season better than ever. In 11 starts, Van Belle finished 5-1 with a 4.15 earned-run average and 48 strikeouts to lead the Seahawks to a Southern Conference Championship.

With his redshirt sophomore performance, Division I schools gained interested in Van Belle.

“We heard a lot about him from high school coaches and background checks,” Miami associate head coach and pitching coach JD Arteaga said. “We liked the arm action, we liked the body and what he brought to the table.”

Receiving an offer from UM was a dream come true for Van Belle.

“Out of high school, if you would have told me I would’ve been playing at the University of Miami in three to four years, I would’ve said, ‘You’re joking,’” Van Belle said. “I knew this is where I wanted to be.”

From day one, Van Belle was determined to make an impact on the Hurricanes’ pitching staff, and his hard work paid off. First-year head coach Gino DiMare and his staff elected to put Van Belle in Miami’s weekend rotation.

When Van Belle heard the news, he was stunned.

“When I found out I was the Sunday starter, I was ecstatic,” Van Belle said. “I called my parents up right away, and I just knew this was an opportunity given to me, and nothing is set in stone.”

Van Belle owns a 5-2 record and leads the Hurricanes’ starting rotation with a 3.28 ERA. He has struck out 53 batters through his first nine starts, helping Miami rank as the second-best pitching staff in the Atlantic Coast Conference.

Van Belle continues to thrive in the rotation for Miami and uses one major lesson he learned at Broward College: get better today.

“Every time we would ask Brian how he was doing, he would say, ‘Just trying to get better,’ and he still has that attitude,” Bizier said.

Van Belle aims to improve with every outing, every out and every pitch.

The Hurricanes look to extend their winning streak to six games when No. 23 Miami hosts Florida Gulf Coast Tuesday at Mark Light Field. First pitch is set for 6 p.m.

Achong acing the competition during her freshman season
What matters to Ken Jeong: Minority representation in film