UMTV’s SportsDesk has been nominated for a Suncoast Student Production Award in the sports program category. The Suncoast Chapter of The National Academy of Television Arts & Sciences promotes the pursuit of excellence in video production and recognizes exceptional accomplishments that are created by college, university and high school students.

This nomination comes just weeks after members of the SportsDesk team traveled to Los Angeles to receive a College Television Award from the national level of the Television Academy.

“Even though SportsDesk has been fortunate enough to be nominated and eventually win several awards over the years, the thrill of winning never gets old,” said Edward Julbe, a broadcast journalism professor at the University of Miami and the faculty advisor for SportsDesk. “What I enjoy the most about being nominated for an award is the enthusiasm and excitement that the recognition generates in my students.” 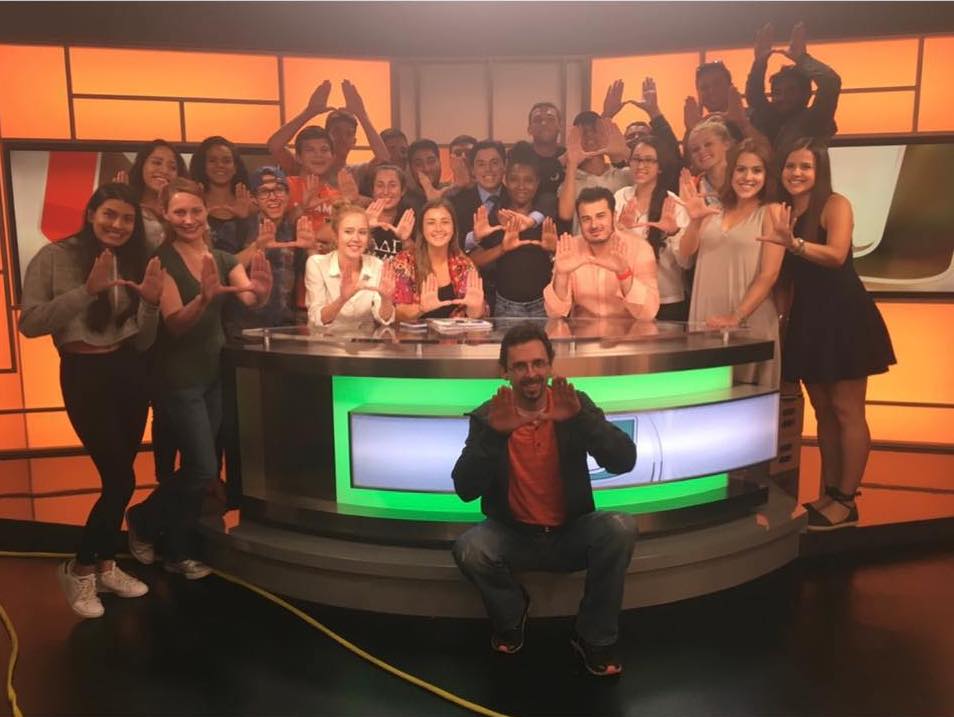 The team behind UMTV's SportsDesk has been nominated for the Suncoast Student Production Award. Photo Source: Facebook

The Suncoast Chapter is a Florida nonprofit organization composed of professionals who work in television and students who are studying broadcast at the undergraduate level.

With no other productions nominated in the sports category, UM students were competing against themselves in the Suncoast Production Awards. Only two finalists were announced and both are SportsDesk episodes.

“When I started four years ago, SportsDesk was a great show, but the content of it was not the best,” Mennella said. “A lot of people would do stories on IM teams and club sports because it was hard to reach the athletic teams, but through the years, SportsDesk has built up relationships with the athletic department, has gotten critiqued by current ESPN producers, and now we put our best content forward.”

SportsDesk is an award-winning, student-produced weekly sports show. Students from various majors and undergraduate years are able to report, host, produce and create packages for the show.

“One thing that’s awesome about UMTV is that you can be a part of every show even if you’re not in the School of Communications,” said Alex Mennella, a senior majoring in marketing. “I’m in the business school and now I can say that I was a part of an award-winning sports show.”

“The students and advisor have been a tremendous help in learning sports production,” said Isabella Didio, a freshman majoring in communication honors-journalism. “The upperclassman who work on the show are so knowledgeable and have been so willing to share that knowledge with me and I am so grateful for that.”

“Thanks in large part to the resources we have at the School of Communication, we have been able to take the show to places we couldn’t have imagined even five years ago,” Julbe said.