Home » Achong acing the competition during her freshman season

Achong acing the competition during her freshman season

Hurricanes coach Paige Yaroshuk-Tews expects commitment from every player. After all, winning more than 350 matches requires a team effort.

And through her years of experience, Yaroshuk-Tews saw right away that freshman Daevenia Achong would dominate the court from the start of her University of Miami career.

“She’s very much a team player,” Yaroshuk-Tews said. “She wants to see the team succeed. But she’s very much an individual in terms of her relentlessness and approaching this as her job every day.”

Achong’s passion on the court stems back to her days in Geleen, a small town in the Netherlands.

While just 3 years old, Achong went along with her brother, Gemayal, to his tennis practices and picked up the dropped balls.

“The trainers said it was possible that she could start training at that age,” her father, Jerry, said. “And so Daeve’s tennis practices started. Soon, they saw she was talented and eager to learn and train and slowly started to play and train more.”

Achong continued her tennis training, excelling on the court. 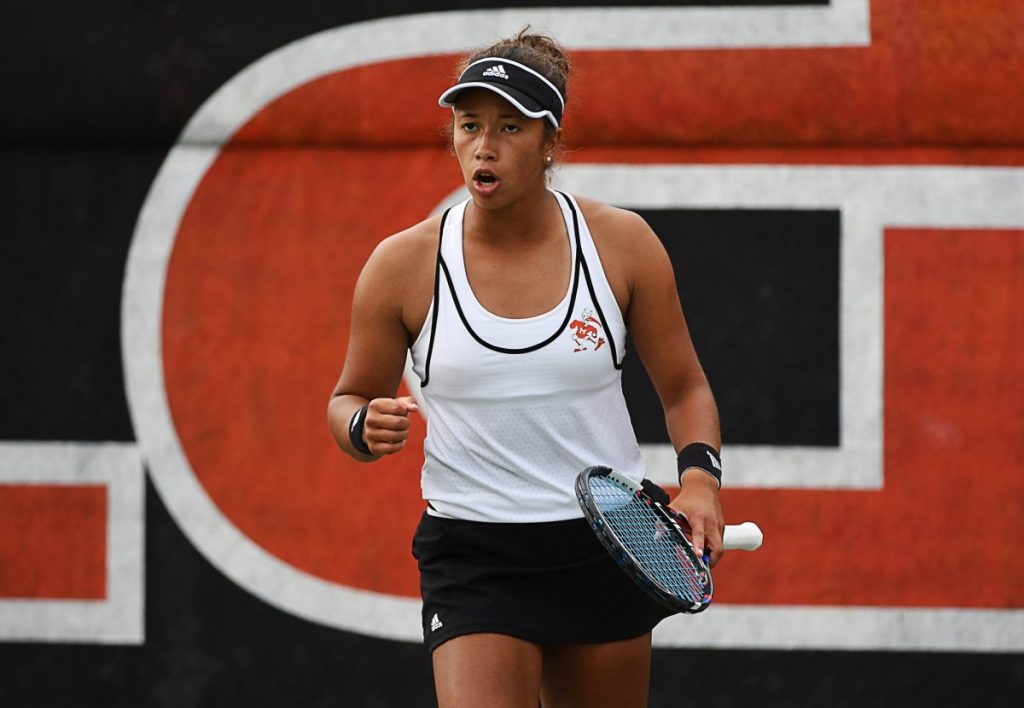 She competed in tournaments across Finland, Kenya, the Netherlands, South Africa, Spain and Sri Lanka. Achong secured multiple national tournament championships in her home country in both singles and doubles and won a Grade 4 singles championship in Kenya in 2016.

She peaked at No. 224 in the ITF Juniors rankings in January 2017 and several university and professional coaches wanted Achong to join their team.

But it was clear Achong wanted to receive an education while enhancing her game. So, she decided to attend the UM, which to her, was an easy choice.

“It’s all so good between the coaches, the intensity of the training, the environment,” she said. “It’s like all in one.”

Achong enrolled in January, and it became clear that she was ready to learn and get better in every practice.

“What I like the most about Daevenia is how mature she is and how she takes criticism,” junior Estela Perez-Somarriba said. “I think that’s very unique for a freshman and especially that she came in the spring.”

Achong recognizes Perez-Somarriba’s seniority and skill. The freshman was eager to enhance her knowledge from the second-ranked tennis sensation.

“She’s so consistent,” Achong said. “Every point, she’s tough. Her mentality is crazy.”

Achong’s attention to detail and hard work has paid dividends throughout her early collegiate career.

In just her first semester, Achong has been tabbed Atlantic Coast Conference Player of the Week twice and ACC Freshman of the Week three times.

“She’s been able to transition to college tennis so fast,” Yaroshuk-Tews said. “Being a spring admit and being able to gel and mix with these kids has really been able to catapult us.”

The play can be very different in the United States compared to the Netherlands, especially since Achong is a part of a team rather than constantly focusing on her individual play.

“I like the environment of a team,” Achong said. “You can support each other all the time in matches and training. I think that’s the key to a good result in a match.”

While Achong is a team player, Yaroshuk-Tews still describes her as a “free spirit.”

Every player on the team wears a visor during practices and games— Achong is the only exception. Instead, she wears a slick, black bandana across her forehead.

Though the individualistic spirit is there, Achong continues to focus on consistency and listening to her teammates on and off the court.

Achong finished the regular season with a 15-8 record in singles action and a 16-4 mark in doubles play. Achong and senior Daniella Roldan form the No. 20-ranked doubles pair in the country.

Although Yaroshuk-Tews recognizes Achong’s talent, she knows the Dutch phenom still has a lot of work left at UM.

“She has that X-Factor,” the 18th-year head coach said. “She has a ton of variety in her game, she’s able to transition in the court, and her movement is unbelievable. She kind of possesses everything you need in order to be good. With her, it’s going to be about putting everything all together.”

While the future is still undetermined, Achong’s father knows that she will be able to piece everything together.

“Daeve is very dedicated, eager and focused with hard work to reach her goals,” he said.

Achong and the 25th-ranked Hurricanes return to action April 18 when fifth-seeded Miami plays in the ACC Tournament.

U First looks back on its accomplishments
Van Belle used to pick weeds from the outfield, now he stars on the mound