Home » Anna Backman driven for success from an early age

Anna Backman driven for success from an early age

She was just a small-town girl living in a lonely world of Finnish golfers in her hometown of Vääksy, a village that is about a 90-minute drive from Helsinki, Finland.

Now, Anna Backman finds herself in the crowded world of NCAA Golf— a very competitive person trying to outcompete the rest of the nation. She’s reaching for the American dream in sports and in life.

It is this competitive spirit that drives Backman through all her ambitions. Through everything she pursues in life, she remains focused and driven.

But it wasn’t long before the young girl found her true, long-term calling. Or rather, it found her.

“We live in a small village. 4,000 people live here,” her dad said. “A golf course was built here in 2006. The following year I first took her to the golf course to get her to know what golf was.”

Anna, just six years old at the time, would still need practice to absorb the sport before she was out on the course flying solo.

“I was walking with my dad a lot on the course before I was able to play,” Backman said. “I kind of knew the game before the first round I played.”

But her love for the game came almost immediately.

“I was very passionate from a very early age,” Backman said. “I think it was just fun. I was really into the game even though I was young. If I hit a bad shot, I started to cry.”

Backman soon realized that in order to fulfill her competitive drive, she needed to enter a tournament, even an informal one. 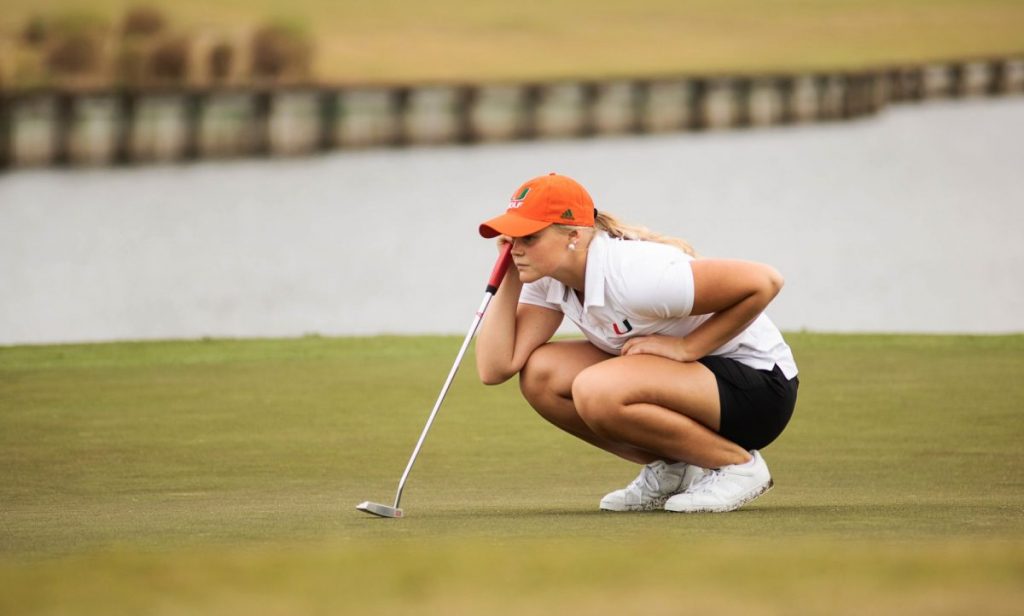 She decided on a contest held at her local golf course. Far from a fancy, televised event with jumbotrons and electric leaderboards, the facility notified the winner a day after the competition.

When Backman found out she won the tournament, her mind became a sea of emotions.

“The girl who was working at the golf club called me and she was like, ‘Hey, you won,’ and I just started screaming ‘Oh my god! Oh my god!’” she said.

But this would not be the last or the most meaningful win of Backman’s career, which soon took off. She quickly honed her skills and became so good that her at-age competition probably became relieved at what happened next.

“As soon as I started competing with my age, I was so ahead of them,” Backman said. “I was 11 or 12 years old, so I was placed in the under-14 competitions instead. I was so competitive, and I was playing some before I started to play around Finland with other juniors.”

As Backman began to move forward with her game, she began to step into European-wide tournaments. Her time on the European Junior Women’s Tour created many positive moments, including wins at the FJT Invitational and the Audi Finnish Open.

It was on one of her tougher days, however, when she had one of her more memorable experiences while playing at the Evian Resort Golf Club in Evian-les-Baines, France, where professional female golfers play one of the five major tournaments.

“It was really cool to play at that course. I didn’t really play well at that tournament,” said Backman, who felt the prestige and natural beauty of the club erased many bad memories.

Despite her success in Europe, Backman decided to seek a different opportunity while still playing the game she loves. Years of back-and-forth contemplation about whether or not to cross the pond ended with one meeting.

When Patti Rizzo, the Hurricanes’ women’s golf coach, made her rounds overseas to evaluate and recruit prospective student-athletes, Backman stood out like an arctic aurora in the night sky.

“She could really hit the ball hard,” Rizzo said of Backman, also complimenting the Finn’s ability to mix the shorter puts with her natural power.

With the opportunity to combine high education with world-class golf competition, Backman found herself on the west side of the Atlantic Ocean.

The concept of an athletic scholarship—well known in the United States but virtually nonexistent across much of the globe—was an important factor in the mutual attraction between Backman and the States.

Another big change for Backman is the way the NCAA governs the sport, which is meant for individuals but played by teams.

“You never do that when you’re playing somewhere else,” Backman said.

In spite of the change, it is Backman’s team that is most thankful for her presence on the course.

Backman earned her first collegiate tournament title with an 11-under-par score to win the UCF Challenge on Feb. 5. Backman led the Hurricanes to a second place finish en route to being named ACC Golfer of the Month.

The freshman has helped Miami climb up to No. 19 in the country, posting four top-25 finishes along the way.

But while the biggest culture shock between school and home comes from the contrast between Finland winters and Florida sunshine, it may not take long for Backman to feel at home in Miami, even if “home,” lies 5,000 miles away from where she was born.