Miami outscored Florida State 15-0 across the first two games of the series at Mark Light Field.

But the Hurricanes couldn’t cap off their first series sweep against the Seminoles since 2001.

A trio of errors and baserunning mistakes doomed UM as FSU rallied for a 6-5 victory on Sunday afternoon.

The eighth inning proved to be the difference.

With the game tied at four, Florida State (19-12, 7-8 ACC) opened the inning with its first three hitters reaching on as many pitches.

Prized second baseman Nander De Sedas lined a single into centerfield on the first pitch he saw from Greg Veliz. Then, Jonathan Foster attempted to bunt De Sedas to second base, but Veliz bobbled the baseball and was charged with an error. One pitch later, Alex Sanchez bunted for a single to fill the bases.

Veliz responded with back-to-back outs, but he couldn’t get out of the jam unscathed because of an errant throw.

The junior reliever induced a groundball to shortstop that Freddy Zamora smoothly backhanded, but threw it over the head of first baseman Alex Toral and caromed off the UM (20-12, 7-8 ACC) dugout.

Both De Sedas and Foster came around to score to break the tie and put FSU ahead for good. 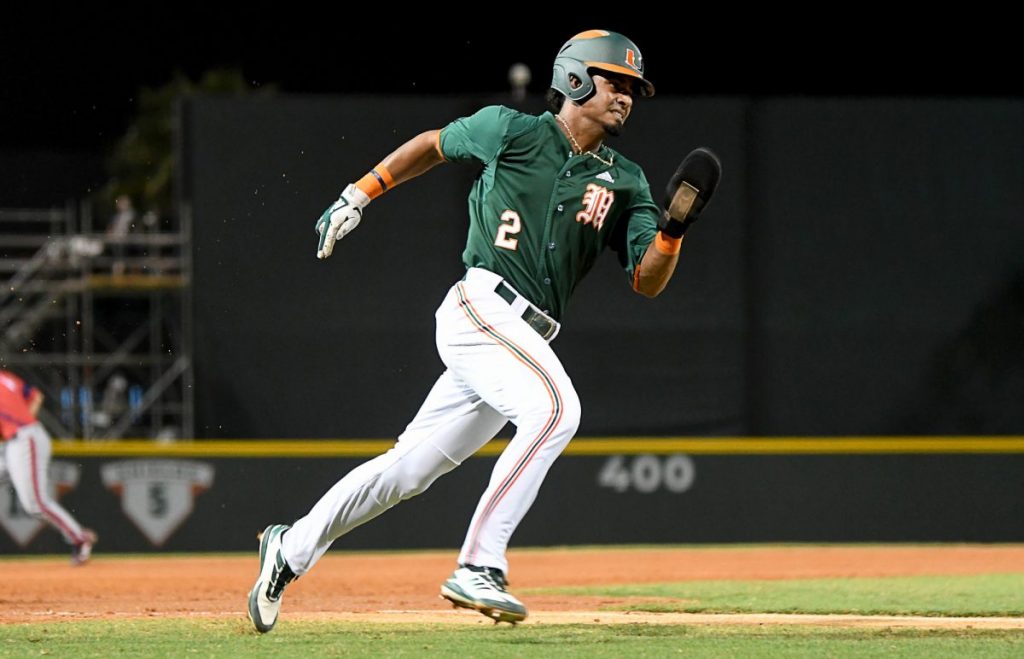 The Hurricanes’ mishaps occurred on the bases as well.

Raymond Gil lead off the fourth inning with a double and JP Gates followed with a single into left field. GIl raced past third after DiMare initially wave him home, but the first-year head coach put up a late stop sign. Gil tried to retreat back to the base, but slipped and was tagged out.

On the next pitch, Michael Amditis rocketed a home run over the left-field fence to give Miami a 4-3 lead.

The Hurricanes’ aggressiveness on the basepaths also backfired in the second inning. Gates reached with a single, but was thrown out trying to advance on a wild pitch after he slid past the base.

Florida State opened the scoring behind Mike Salvatore’s RBI double in the third.

Miami responded with two runs of its own in the bottom of the frame. Anthony Vilar doubled home Toral and Zamora plated Jordan Lala with a single to put the Hurricanes up 2-1.

Two-way player J.C. Flowers blasted a solo home run to left in the fourth, and two batters later, Foster did just the same.

Flowers, who started the game in centerfield and threw out Vilar trying to score on a line drive to end the third, squeezed home a run in the fifth. He picked up his sixth save of the season, recording the final six outs.

Conor Grady (5-3) tossed one-third of an inning to earn the win, while Veliz (1-1) got tagged for the loss.

“That’s unbelievable,’’ DiMare said of the walks to strikeouts ratio. “I don’t even recall ever seeing that— two walks to 18 strikeouts. And we didn’t come up with the W. Again, we did not play a complete game in any facet, and we still had a chance to win. I told the guys, ‘When you play a clean, good, complete game it takes care of itself.’ We didn’t do that. …We did that the last couple nights.’’

The Hurricanes will wrap up a five-game homestand on Tuesday when Miami hosts Florida Gulf Coast. First pitch is set for 6 p.m.