The win not only marked an illustrious milestone for the UM Sports Hall of Famer, but gave the Hurricanes their first top-15 triumph this season.

“Listen, it’s not about me, it’s about these kids,” the 18th-year coach said. “I’m happy for them. They needed this for their confidence. We’ve had a few close matches against some good programs, so you know, I think that this time of the year, for this group, this is big moving forward for our confidence. Heading into finishing out our ACC schedule, I think they really needed it. I’m happy for them.”

Miami (13-5, 6-4 ACC) started off the match strong with junior Yuna Ito and senior Ana Madcur teaming up for a 6-0 victory over Wake Forest’s Alexis Franco and Anna Ulyashchenko.

The 34th-ranked duo of freshman Daevenia Achong and senior Daniella Roldan followed with a 6-2 win over No. 38 Chandler Carter and Emma Davis to clinch the doubles’ point and give the Hurricanes a 1-0 advantage. 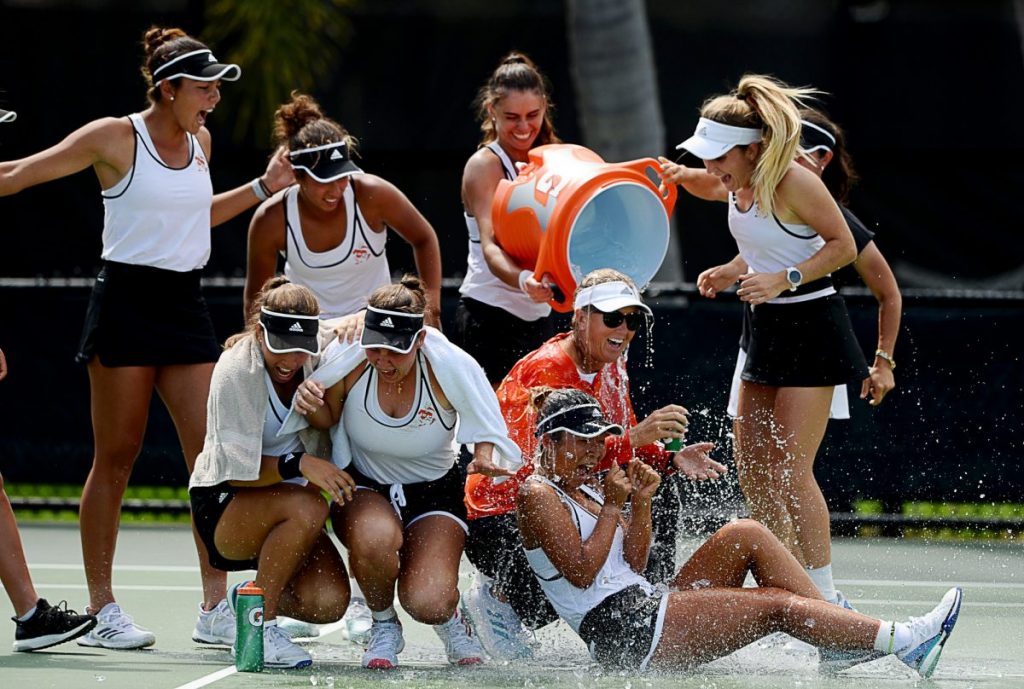 “We have been playing very disciplined and simple tennis,” Roldan said. “Sometimes things don’t work out, but just stay calm and stick to the plan, which has been playing basic. I think that just got us through the match. We didn’t panic and that’s why we kept going, and won the match.”

“I thought Daevenia was unreal today,” Yaroshuk-Tews said. “That kid she played was tricky. We knew coming in that the matchup here was tricky. Daev handled her. We just stayed on point, relentless, never let her in the match.

And just moments later, on the main court, No. 2 Estela Perez-Somarriba secured the momentous win.

The junior from Madrid, Spain defeated 46th-ranked Davis, 6-1, 6-4 to pick up her team-leading 17th decision this season.

Despite the match being decided, Ito strengthened Miami’s performance with a 6-3, 1-6, 6-1, three-set triumph over Eliza Omirou.

Carter notched the Demon Deacons’ lone point of the match with a 6-3, 4-6, 6-3 win over Ulyana Shirokova.

Although, Shirokova did not come out on top, Yarkoshuk-Tews thinks her play sparked Miami.

“I think Ulyana pulling the second set on court five helped the momentum and helped the energy on the front side,” Yaroshuk-Tews said.

With the victory, the Hurricanes have won 17 consecutive matches against Wake Forest (17-5, 7-3 ACC), moving their record to 21-1 all-time against the Demon Deacons.

“To pull wins like this, it’s a group effort,” Yaroshuk-Tews said. “It’s not one or two, it’s everybody. And even when everybody shows up, not everybody wins, so that’s kind of the mentality.”

Miami will look to extend its winning streak to three games when the Hurricanes travel to play the Boston College Eagles at 2 p.m. Friday, April 5.

To breakup or not breakup?
UM community reacts to the Mueller investigation 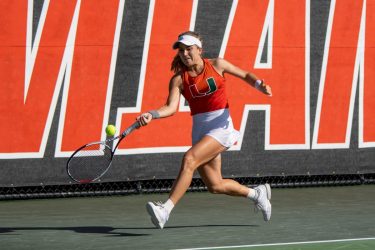