Home » Tate Martell grew up wanting to be a Miami Hurricane

Tate Martell grew up wanting to be a Miami Hurricane

The Las Vegas native was featured on “60 Minutes” as a burrowing football star, learning under quarterback guru Steve Clarkson.

And although most major college football programs came knocking for the eventual U.S. Army All-American and USA Today National Player of the Year, the Miami Hurricanes did not offer Martell while he starred at Bishop Gorman High School.

Yet, Martell still wanted to be a Hurricane.

“I don’t know how much you guys kept up with me in high school, but I put Miami in my top seven without even talking to them because I wanted to come here,” Martell said. “That was my way of trying to get them to talk to me. The history and the swagger the people played with here, that’s kind of what intrigued me from the jump.”

And two and a half years later, including a stop at Ohio State, Martell finds himself exactly where he wanted to be.

After redshirting in 2017, Martell appeared in just six games for the Buckeyes, completing 23 of 28 passes for 269 yards and one touchdown and rushing 22 times for 128 yards and two scores.

He entered his name into the transfer portal in January after former OSU coach Urban Meyer retired and former Georgia quarterback Justin Fields transferred in to play for new coach Ryan Day.

Immediately, Hurricanes tight end Brevin Jordan, who played with Martell in high school, reached out to recruit him to Coral Gables.

“He’s a 5-11 little white dude with tattoos, running around with high energy, cocky,” Jordan said. “Just loves the swag. His swag is so Miami.”

Jordan served as the beginning of the communication line between Martell and Hurricanes coach Manny Diaz.

And less than a week later, Martell announced he committed to Diaz and UM.

“If everything worked out when I was kind of going through the process, when I was visiting schools, if it checked off all the boxes that I wanted, then this is where I was coming,” the 21-year-old quarterback said.

Since Martell has arrived, it has been a perfect fit. 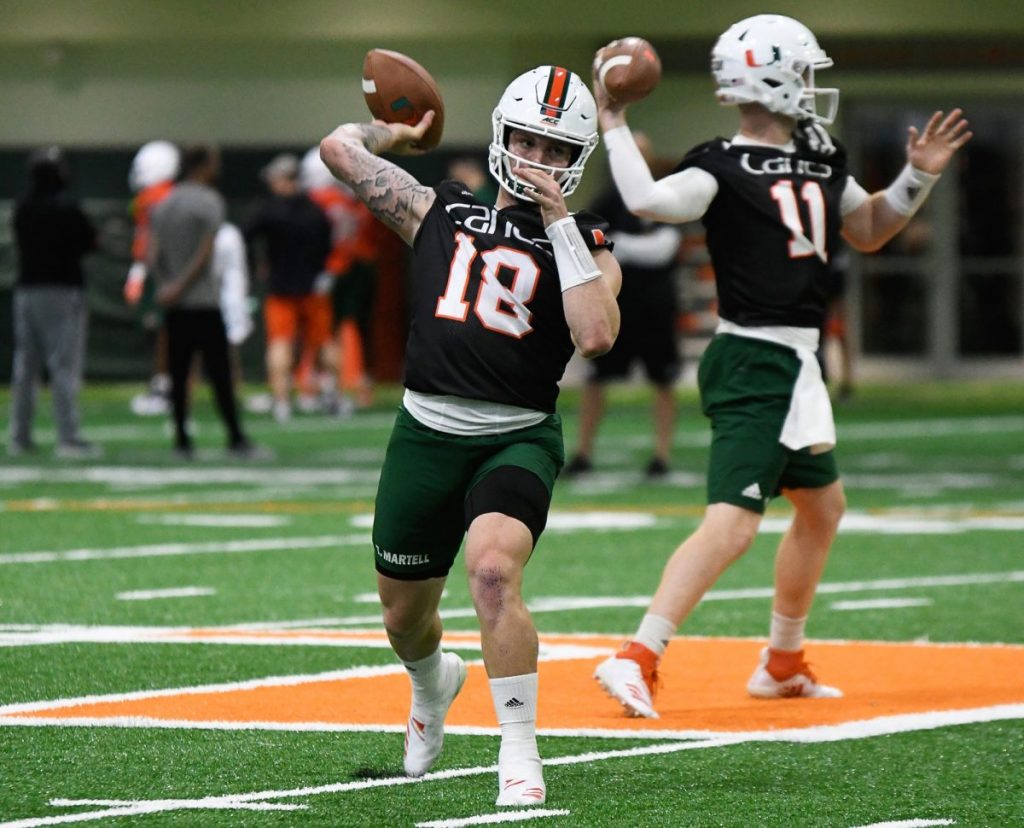 “I came in, did what I did, I worked hard, did what I had to do, and it was easy because the guys in the locker room also took me in like they didn’t care I was a transfer,” he said. “They didn’t look at me like a transfer. They looked at me like, ‘This is our teammate. This is what we do.’”

Martell has stayed after practice, working on his mechanics with coaches and throwing to receivers Mike Harley and K.J. Osborn. He has even spoken to former Miami quarterbacks Steve Walsh and Brad Kaaya about what is expected.

Although the former No. 2 dual threat quarterback in the nation has quickly earned the respect of his teammates, Martell is working to learn Hurricanes offensive coordinator Dan Enos’ new system.

While Martell collected an impressive high school résumé, going 43-0 as a starter and throwing for more than 7,500 yards and 113 touchdowns, he has had to make adjustments on the field.

“For me, the hardest thing is I haven’t done anything under center since sophomore year of high school,” Martell said. “It’s an NFL system, it’s a West Coast passing system, under center, shotgun. You have it all in this system. You can pull up clips of pretty much any NFL system and you’ll see a lot of it that’s in this system.”

Added Enos, “From a fundamental technique standpoint, we have a long way to go on just taking a proper drop, the mechanics, where our eyes and feet go. We’re making strides, but it’s been a slow process, as you would expect. We don’t get to work with them on the off-days as far as their technique and fundamentals. Certainly, we’ll continue to make strides this spring. But where I think the biggest development work will occur will be from April 20 until we report in July, if that makes sense.”

In 2018, Miami finished just 7-6 with its quarterback play under serious scrutiny.

Despite, the Hurricanes’ lackluster performance a year ago, Martell is ready to handle the responsibility if he is named UM’s starting quarterback this fall.

“I’m not sitting here looking at myself as, ‘Oh, I have to come in here and save the program,’” Martell said. “I feel like we have to just follow the plan that Coach Diaz has in place and offensively, we need to execute what Coach Enos runs at a high level and we’ll be perfectly fine. I’m excited for this season and what this team has right now. We’re on a good path. It’s taking a little bit of time. It’s not going to be easy. But I promise you, we’ll be ready, the way that we’re going and how we’re working right now.”