SportsDesk is one of two UMTV productions consisting of 30-minute live shows. Each episode covers a topic related to Hurricanes athletics, including analytics, highlights, commentary, short features and one-on-one interviews. To be considered for a nomination, the team members submitted a package from April 6, 2018 that they believed to be their strongest of that year. The publication included stories on a cheerleader with multiple sclerosis, former UM athletes and an interview with new soccer coach Sarah Barnes. On January 14, 2019, SportsDesk was officially nominated for a College Television Award in the sports category, earning recognition above the 600 other applicants from 174 schools.

When it was time for the announcement of the winner in the sports category, Jason George from the award-winning TV show “Grey’s Anatomy” and Ryan Guzman from the movie “Step Up: Revolution” took the stage to read out the award recipient. Fuentes, a senior majoring in broadcast journalism, described feeling an aching suspense as she waited for the grand reveal. She and her team were squeezing each other’s hands tightly in anticipation of the results, but all that worry melted away as soon as the results rang through the air.

“We jumped up and screamed and witnessed everyone was cheering around us,” said Fuentes. “We were very emotional.” 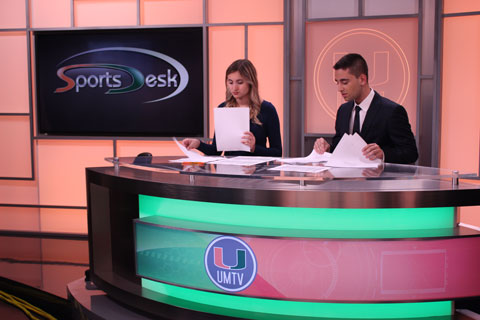 SportsDesk anchors read over their notes in preparation for the next shot.

Fuentes and her team went up to accept the award. As they walked to the stage, Fuentes said she found it difficult to contain her excitement. “This has never been done in the history of SportsDesk; it was monumental.”

Her acceptance speech was full of both emotion and shock.

Fuentes said she is very grateful for her dedicated team. “We did this for all of the people involved on SportsDesk.” She pointed out that individuals working with UMTV do not get paid or receive class credit. Rather, “everyone that is there genuinely wants to be there. That allows for exceptional work and amazing work ethic that has gotten us to where we are now.”

Immediately after accepting the award, the team FaceTimed its adviser, Edward Julbe. He was emotional as well upon hearing the news, Fuentes said. He told the students, “You worked so hard for this. You’ve really made SportsDesk proud and you deserve this award.”

Julbe, an industry veteran and professor in UM’s School of Communication, said he was excited that his students’ efforts paid off. “It’s always nice when others acknowledge the great work our students do here at the SOC,” Julbe said.

“It’s a true honor to be recognized and even a greater honor to actually win,” Fuentes said. “It puts SportsDesk and the university at a whole other level.”

Correction, 1:55 p.m., April 10: This article previously referred to the College Television Award as a “College Emmy,” which is not the accolade’s official name. It also stated that there were applicants from 135 schools, when in reality there were applicants from 174. The original article also stated that Amanda Fuentes said the awards ceremony “felt like a real Hollywood event,” but this was not an accurate representation of her words. The article has been updated to reflect this information.