A pop culture staple, Marvel films are fun, entertaining and empowering. Gearing up for the conclusion of the Avengers franchise, with a movie appropriately titled “Avengers: Endgame,” Marvel is capping phase three of its cinematic universe by presenting new-comer Carol Danvers (aka Captain Marvel), in her very own stand-alone, self-titled film.

With a release date that appropriately lined up with International Women’s Day, “Captain Marvel” is the franchise’s first superhero film centered around a female protagonist—talk about a way to kick-off Women’s History Month. After competitor DC Entertainment released a successful “Wonder Woman” adaptation to a receptive audience, the industry has realized that viewers are very willing to watch a female superhero in action. Although Marvel has a set of female heroes, such as Black Widow, Scarlet Witch and Gamora, none of them have their films centered exclusively on their own narratives and origin stories. This makes “Captain Marvel” the first of what looks like a promising future full of female superhero stories. 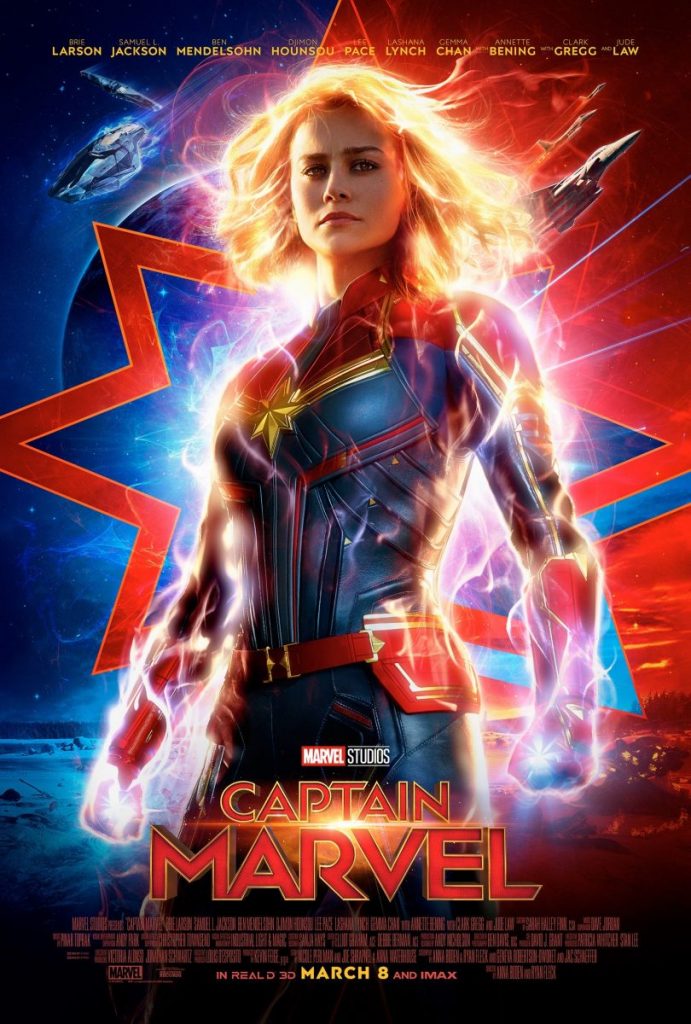 The film opens with title character, Carol Danvers, caught in the middle of an intergalactic war between the Kree and Skrull alien races. After a mission gone wrong, she crashes onto 1990s planet Earth and inadvertently begins to unlock secrets of her own past. Shuffling through her fragmented memory, Carol struggles with a battling heart and mind, and grows into her own, finding her place and purpose.

Using incredible special effects, “Captain Marvel” makes complicated sequences easy to follow yet still visually stunning. The movie also does a great job of tackling the 90s aesthetic, making this Earth from not-too-long-ago a fun place for Carol and the viewers to enjoy. There are several old-school technology teases that earn laughs for their signature Marvel humor.

The film does not shy away from highlighting the prominent sexism of the time, exploring the limitations of women in the military and expected social interactions, namely through Carol’s memories. It proudly shows Captain Marvel trying and failing, but most importantly, repeatedly getting back up. The protagonist’s persistence echoes the sentiment behind the film’s tagline sentiments: “Higher. Further. Faster.”

All the cast members deliver on their performance. Brie Larson, starring in the titular role, is a believable spitfire with a knack for getting into trouble. Returning as a younger Nick Fury, Samuel L. Jackson presents an open and charming side of a character who we’d not previously known beyond his iconic scowl and eyepatch. Together this duo makes the movie spark, as they playfully bounce off each other with wit and camaraderie. The scenes during which the space heroine and earth S.H.E.I.L.D agent work together bring true vibrancy to the film. Ben Mendelsohn plays Talos, the Skrull leader, boldly and comfortable, delivering a performance filled with an air of humor and authority.

Captain Marvel struggles with her identity as well as the repercussions of war. These inner conflicts provide deeper insights that delves beyond the typical surface-level backdrop to superhero films. They’re also excellent examples of film’s power to deliver meaningful narratives. These films are not only set to widen their audience, but also widen their ideas.

Ultimately these stories within “Captain Marvel” point towards a better understanding of empathy and loss. The protagonist’s compassion and determination sets her on the right path towards a marvelous adventure. Complete with a loving tribute to the great, late Stan Lee and two post-credit scenes, “Captain Marvel” should be at the top of your spring to-do list.