For Daniel Mortensen, it’s hard to remember a time in his life when his sister wasn’t beaming with positivity.

Sarah Mortensen, a junior forward on the University of Miami women’s basketball team, didn’t just have an ever-present grin as a child she also had a talent for basketball. Her parents, Pia and René, both played the sport at the semi-professional level in their home country of Denmark, and they passed on their love of the game to their children.

While she’s known for her sunny disposition, her brother Daniel admits that Mortensen can be a bit of a “sore loser.” Most of the time, this sparked fierce competitiveness in a talented young player, but sometimes the responses to losing were a bit more extreme.

After one loss, Mortensen was so angry that she went into the shower fully clothed and just stood there as the water soaked through her uniform. Another time, her brother said he saw things get a bit fierier.

After a loss at a club final, Mortensen’s team went home with participation shirts instead of trophies. She was so mad that she set the shirt on fire, her brother said.

Although she’s adamant that she never burned any other items in frustration, Mortensen’s competitive nature pushed her to take major leaps in life.

While most international talents come to the United States for the first time as college freshman, Mortensen took a unique path.

“I had a couple coaches that were like, ‘You need to be challenged more. It’s time for you to either go professional or go to America,’” she said.

Mortensen agreed, making the decision to travel more than 3,000 miles from home all by herself to play her senior year of high school at Long Island Lutheran on Long Island, New York.

He heard tales of a sweet-shooting girl from Denmark who was looking to come across the Atlantic Ocean and thought Mortensen would be a great fit for his program.

“She’s a machine; the most driven, hardest working kid I’ve ever coached,” Slater said. “Her work ethic is second to none. It’s in her DNA. She’s all about the team.”

Mortensen’s mother said she was nervous about sending her daughter away, but that she ultimately supported the journey because she wanted Mortensen to follow her passion.

“I knew that it was her dream and she wanted to pursue her dream,” said Pia Mortensen. “I was very supportive even though I think it was tough sending her away. She just turned 18 and I think that was tough.” 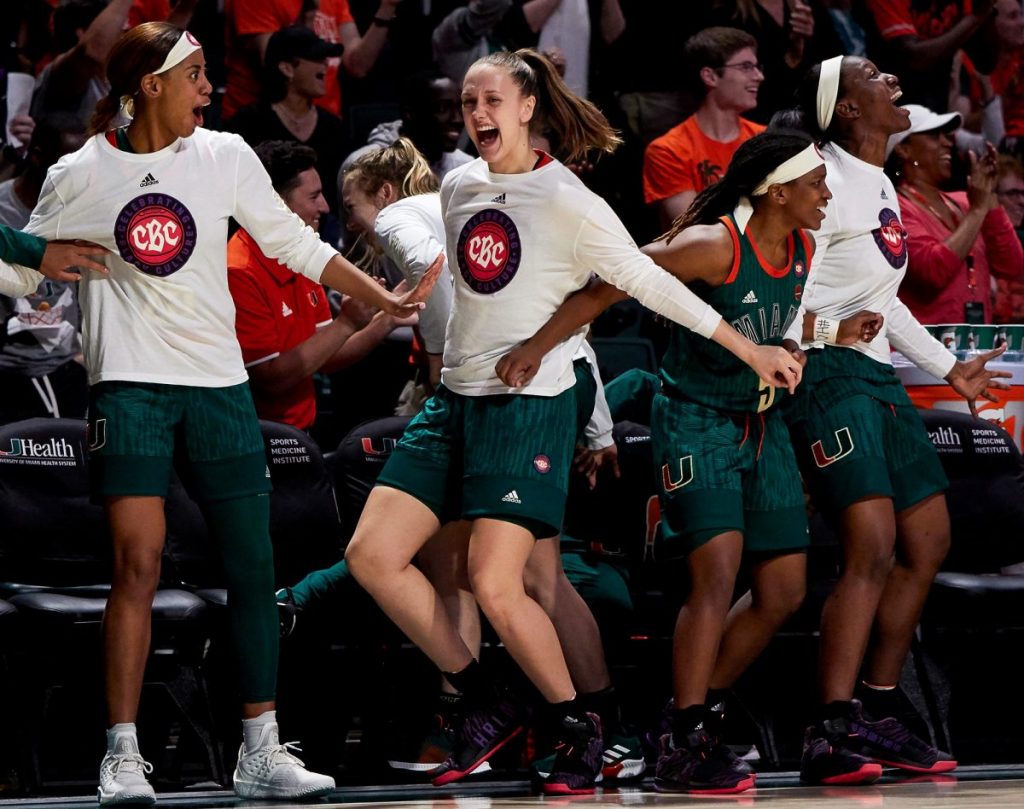 Sarah Mortenson, center, celebrates with her teammates late in the fourth quarter on Feb. 7 at the Watsco Center. The 25th-ranked Hurricanes upset the No. 4 Notre Dame Fighting Irish 72-65. Photo credit: Josh Halper

Mortensen needed a place to live in New York for the 2015-2016 school year, and Slater knew his friend Mark Halperin’s home would be a perfect fit for Mortensen.

“Here I was in the middle trying to tell both parties that they had something special,” Slater said.

After a few Skype calls between all parties, Halperin and his family welcomed Mortensen into their home.

“She was very social, happy, just wanted to do stuff,” Halperin said. “She was really a part of my family for the year she was here.”

Mortensen became especially close with the Haperin children, Amy and Carly. A fan of all types of music, Mortensen introduced the Halperin girls to her favorite tunes, including ones in her native language.

“That was fun because they were singing in Danish,” Mortensen said playfully. “They didn’t understand anything and I could sing a little for them.”

Leaving her family behind wasn’t an easy transition for Mortensen, but she said she’s glad she did.

Mortensen said she learned a lot about herself from her year at Lutheran and that it helped her adjust to life in the United States before college. She credits the Halperin family for making her feel comfortable.

“I think I was nervous going to the States and being on my own and it was good having a family that took me in,” Mortensen said. “I still talk to them today, so that worked out amazing.”

Slater gushed over the impact Mortensen made on him and his program in only one season.

“Coachable,” “unbelievable” and “great teammate” are just a few of the ways Slater glowingly describes his former star. Slater noted that her defensive skills improved dramatically due to her hard work, but it was on offense where Mortensen shined the brightest.

Scoring 22.5 points per game on 57-percent shooting while being voted the Long Island Player of the Year, she led the Crusaders all the way to the state championship game, where they ultimately fell short.

“When we lost in the state championship, she cried and cried and cried,” Slater said. “She felt like she let me down. I told her that we never would have even gotten to that point without her.”

Slater treasured the time he had with Mortensen, describing her as an amazing player and even better person. However, he admits that she does have one weakness.

“She cannot dance, has no rhythm,” he said. “I always tell her God gave her some amazing gifts, but he can’t give you everything.”

Despite some critics, it doesn’t stop her from trying.

“But she loves to do it,” Hurricanes senior Emese Hof said. “I don’t really have a say in this because I’m probably worse, but there are people on the team who have better dancing skills, to put it that way.”

While her dancing gets mixed reviews, there is one off-court talent that everyone in Mortensen’s life awards five stars.

“She’s a great cook,” Daniel Mortensen said. “She loves to bake cakes and different stuff and she’s really good at it. She was always in the kitchen.”

Mortenson loves to bake and she makes her brother a special birthday cake every year. She doesn’t get to make as many cookies and cakes in Miami, but the team’s group of tight-knit Europeans— Mortensen, Hof and redshirt junior Laura Cornelius— enjoy baking sweets together from time to time.

“I wasn’t there the last time,” Hof said. “They made all these cookies and stuff. In one they put too much pepper, so it was like a pepper cookie, but the rest was really, really good.”

As Miami is enjoying one of its best seasons in program history, Mortensen has seen her minutes decline as the season has gone on.

“The bench shrinks as the season goes on, and people play you really differently,” UM coach Katie Meier said. “We will find a team that will play us in a way that Morty has to have a big game or we won’t be able to win, and it’ll come.”

Her playing time has decreased, but Mortensen has channeled her competitive spirit into a Miami bench that often doubles as a cheerleading squad during games.

“I think if I stay happy or if I stay engaging in the game, keep cheering on, then when it’s my turn to get in, I’m ready,” she said. “I mean, it’s just a good attitude, you know? I think that’s important.”

Her animated celebrations are appreciated by her teammates, coaches and family.

“I like it, she’s hype,” Hof said. “If you feel like everyone is locked in and the bench is hyped, that’s just a whole different feel to a game.”

Her on-court impact may be limited this season, but nothing is out of the question when it comes to what Mortensen is capable of outside of basketball.

“If you work 50 percent as hard in whatever you do as Sarah works in everything she does, you’ll be very successful,” Slater said. “She is a success no matter whether she plays five minutes a game, 10, 20 minutes a game.”

While the options are endless, Mortensen has at least one big goal in mind.

“I hope to have my own business, be my own boss, be a CEO or something,” Mortensen said. “Right now I’m in the business school, so I think it’d be cool to invent something and then go sell it.”

No matter what happens next, one thing is certain: the way Mortensen affects everyone around her transcends the sport she plays.

“She’s always seen herself as a basketball player and sometimes maybe forgets what else she has,” her mother said. “She has a big heart and she wants everybody to feel good, and if she can do anything in order to make them feel good, she’ll do that.”