PhilADthropy celebrates 10 years of giving back

For 25 continuous hours, Parkland survivors gathered to share emotional testimonies while students, faculty and staff designed campaigns for the nonprofit March for Our Lives organization.

PhilADthropy, which is celebrating its 10th year of helping local nonprofit organizations, is a philanthropic 25-hour marathon where students, assisted by faculty and alumni, pour their classroom knowledge and talent into creative ads and marketing campaigns for nonprofits that need help.

On Friday, Feb. 22, four of those organizations—Societal Reform Corporation, Branches of Bravery, Change the Ref and Shine MSD—sought advice on how to promote their cause through a special volunteer effort organized through the School of Communication.

“The purpose of PhilADthropy is to allow our students to use their skills that they are learning in a classroom for a greater cause,” said professor Meryl Blau, who started the project in 2010. “The idea is to allow them to understand the power of being able to serve their local community and give back with the skills that they have,” said Blau, who teaches advertising in the school’s strategic communication department. 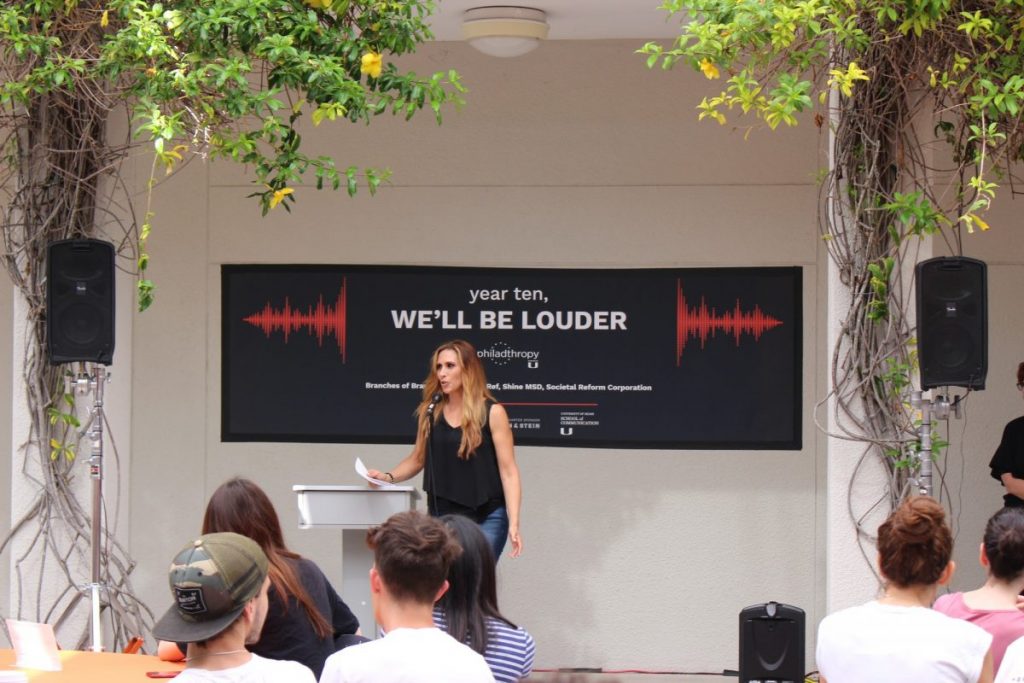 Since the project began, PhilADthropy has recruited hundreds of students, faculty and alumni who have helped many local agencies rebrand and improve their marketing strategies, Blau said.

“In the past, PhilADthropy has had a huge variety of local nonprofits, ranging from cancer to animal shelters and anything in between that you can think of. But this year is all about Parkland,” Blau said. “What I love about the four organizations that we’re working with is that they are all focused on something different. This year there is a really great spectrum of different types of organizations and nonprofit missions.”

PhilADthropy has helped over 130 nonprofits in the past 10 years. Typically, the event helps 12 nonprofit organizations, each from a different sector.

However, for the 10th anniversary of PhilADthropy, the layout was different. This year, there were only four clients and about 30 students on each team. Additionally, an event crew worked throughout the night along with a voluntary film crew that documented the entire event.

“The annual event of PhilADthropy is always for a good cause, but this year hits close to home,” said Isabella Ciardelli, a senior originally from Miami majoring in creative advertising.

“The shooting affects us all. It’s important to do our part by supporting the Parkland nonprofits and collaborating as teams to create an impactful ad-piece. We have to make a change,” she said. 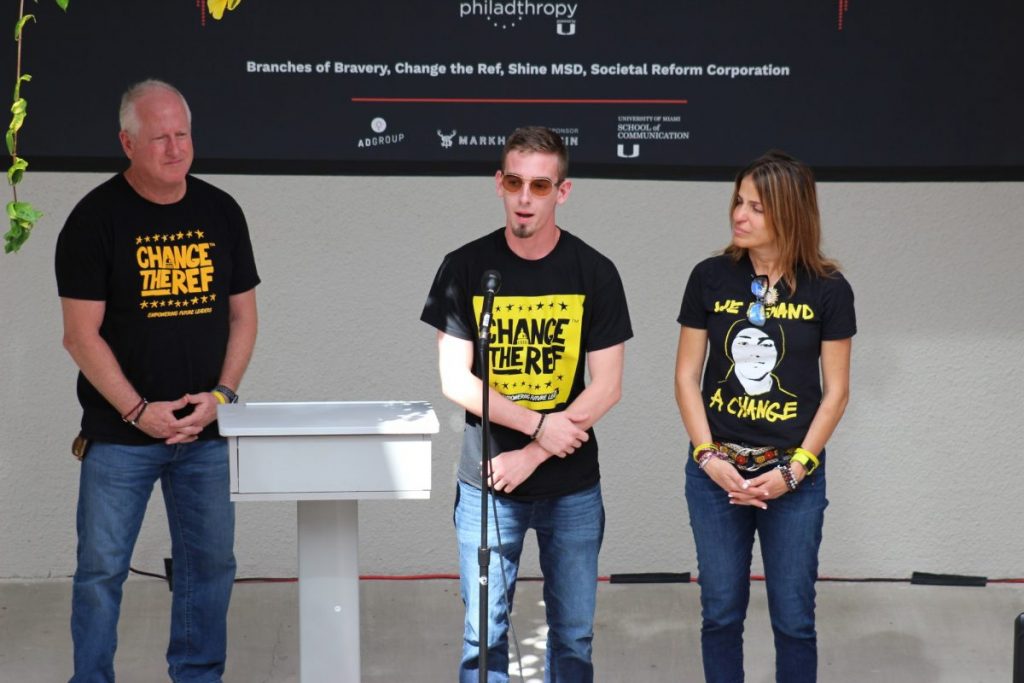 (Left to right) Doug Zeif, Sam Zeif and Patricia Padauy-Oliver explain the mission of nonprofit Change the Ref, which seeks to raise awareness about gun violence and reduce the influence of the National Rifle Association. Photo courtesy Elisabeth Hofer

Blau and the PhilADthropy team attended the 2018 Cannes Lions International Festival Creativity in France last year, a global event for people working in creative communications, advertising and related fields. During a discussion session in which the Parkland survivors shared their stories and initiatives, the importance of these Parkland nonprofits was brought to their attention.

From that point, Blau said she knew that PhilADthropy had to take action, which led her to dedicate this year’s event to highlight the missions of the MSD survivors.

Kai Koerber, a senior at Marjory Stoneman Douglas High School and founder of the Societal Reform Corporation said that mental illness needs to be tackled and addressed at the local level to avoid another Parkland.

“I believe that mental illnesses are the root of most shooting cases in America,” Koerber said. “People need to have mental health checks and resources made available to them so we can see changes.”

Koerber and some of his Parkland counterparts stayed overnight with their assigned UM student teams during the event.

Buoyed by coffee and determination, the UM students spent the next 24 hours camped out in School of Communication classrooms devised advertising campaigns and communication pieces to amplify the goals of the nonprofit.

Through the process of listening to testimonies, brainstorming ideas and researching the backgrounds of each nonprofit, the teams presented ad-based messages through various mediums such as film, web design and photography. The marathon ended with the teams’ final presentations to their nonprofit on Saturday morning.

The four nonprofits said they appreciate the help of the more than 150 students, faculty and alumni who donated their time and energy to their respective causes.

“As a Parkland student, PhilADthropy means a lot to me more than life itself,” said Madison Leal, a senior at Marjory Stoneman Douglas High School and co-founder of Branches of Bravery. “It means giving back and honoring the 17 lives that were lost.”

“We founded Branches of Bravery because we want to help communities affected by gun violence,” said Leal, who met Blau at the film festival in France. “And we’ve honored the lives lost by planting trees and providing resources to disadvantaged communities.” 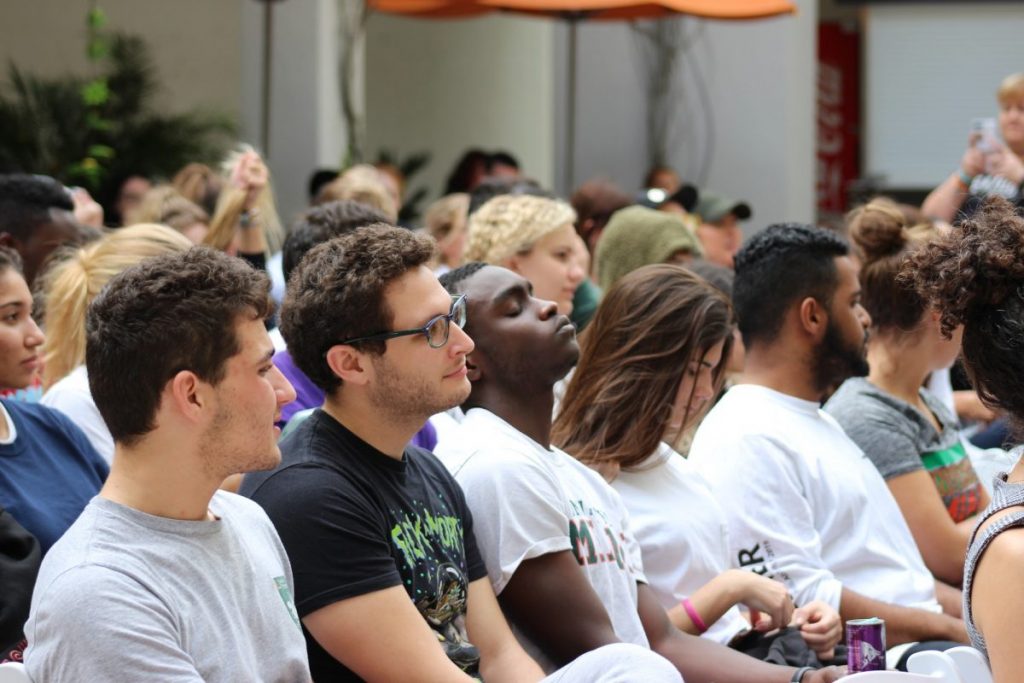 Students attending the PhilADthropy event listen as representatives from nonprofit organizations talk about their missions and visions for the future. Photo courtesy Elisabeth Hofer

“At the end of the event, we hope to boost our message and our platform so more people can understand that all we want to do is make the world a better place one community at a time,” said Leal.

Moving forward, Blau said she wants more students to engage in the event and be exposed to new dynamics and solution methods in response to issues impacting the community.

“I think all students would benefit from PhilADthropy because it enables them to build so much character, and it really shows them what they don’t know they know. When you have no time to stress or to worry about how to get a job done, you get the job done,” Blau said.

Helping your friend get out of an unhealthy relationship
Ultra Music Festival relocates, brings bigger and better lineup