Miami started the season 5-0 for the first time since 2013. Despite losing their final two games against No. 4 Florida, there is plenty of hope for the Hurricanes. 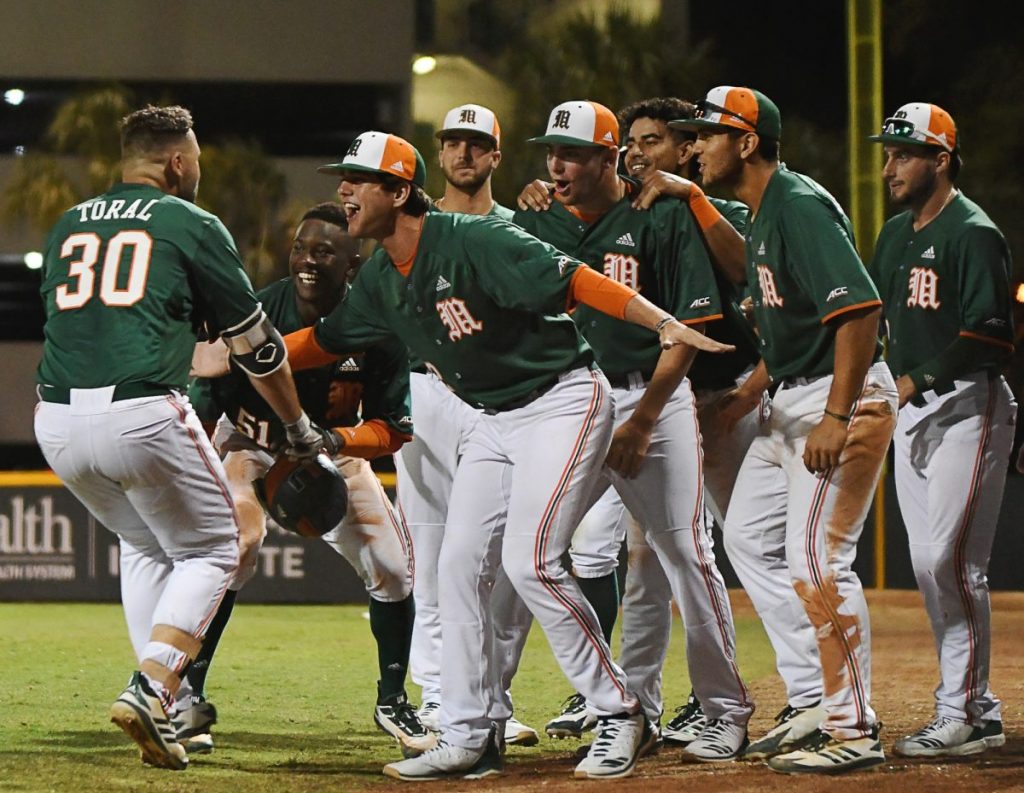 Alex Toral celebrates with his teammates after hitting his fourth home run in as many games. The sophomore leads the conference with five homers this season. Photo credit: Josh White

Through the Hurricanes’ first seven games, Gil leads the team with a .450 batting average and added one home run against the Gators this past weekend.

Toral, who leads the Atlantic Coast Conference with five home runs, looks like a different player. After batting just .161 during his rookie campaign, the 6-foot-2, 215-pound first baseman is hitting .320 and owns a .920 slugging percentage.

“He didn’t have the year we all expected. Maybe that humbled him,” first-year head coach Gino DiMare said. “Coach Lopez and he have meshed well together… He’s hitting the ball all over the field.”

After starting just 1-for-10, redshirt sophomore catcher Michael Amditis went 5-for-10 against the Gators and belted his first career home run. The solo blast was the game-winning hit, securing the Hurricanes’ first series-opening victory over the Gators since 2014.

“It’s been tough mentally for me to go off the injuries that I had, but to finally be healthy again and play against Florida, beat them and hit a home run, it’s an awesome feeling,” Amditis said.

Freddy Zamora and Willy Escala have followed up their sharp freshman years, batting .310 and .310, respectively.

“I don’t know if he’s gone under the radar or not, but he’s our best overall player,” DiMare said of Zamora. “He’s gotten two-out, clutch hits that have really been huge for us.”

Before the season, DiMare raved about the prized rookie.

“Del Castillo swings the bat as well as anybody we’ve had here in a while as a freshman,” DiMare said.

And the Miami, Florida native has lived up to the hype.

Del Castillo, who has recorded a hit in every game this season, is batting .375 and leads the Hurricanes with 10 RBIs. The freshman crushed his first home run, clearing the right field scoreboard at McKethan Stadium in Gainesville.

But what separates Del Castillo from other freshman across the country is his veteran-like offensive approach. The 5-foot-11, 205-pound catcher is very patient at the plate and has displayed power across the diamond.

The Hurricanes knew heading into the season that their starting pitching would be their strength.

And the rotation has not disappointed.

The hurlers have recorded 42 strikeouts compared to just nine walks throughout the first seven games.

“Our pitching is our strength,” DiMare said. “They set the tone each and every game.”

The importance of internships
Bryan Norcross: from tracking hurricanes to teaching Canes