Home » Hurricanes claim victories across the board, suffer some losses

Hurricanes claim victories across the board, suffer some losses

After a strong 4-0 start to the season, the Hurricanes dropped two games in a three-game series against No. 4 Florida in Gainesville.

Saturday, the Hurricanes jumped out to an early 3-0 advantage behind a Raymond Gil three-run blast, but the Gators scored nine unanswered runs in the final three innings to secure the win.

Finally, on Sunday, the Gators dropped the Hurricanes, 4-1. This was Miami’s lowest scoring performance of the 2019 season.

The Hurricanes travel to Florida International University to take on the Panthers 7 p.m. Feb. 27 at Infinity Insurance Park. 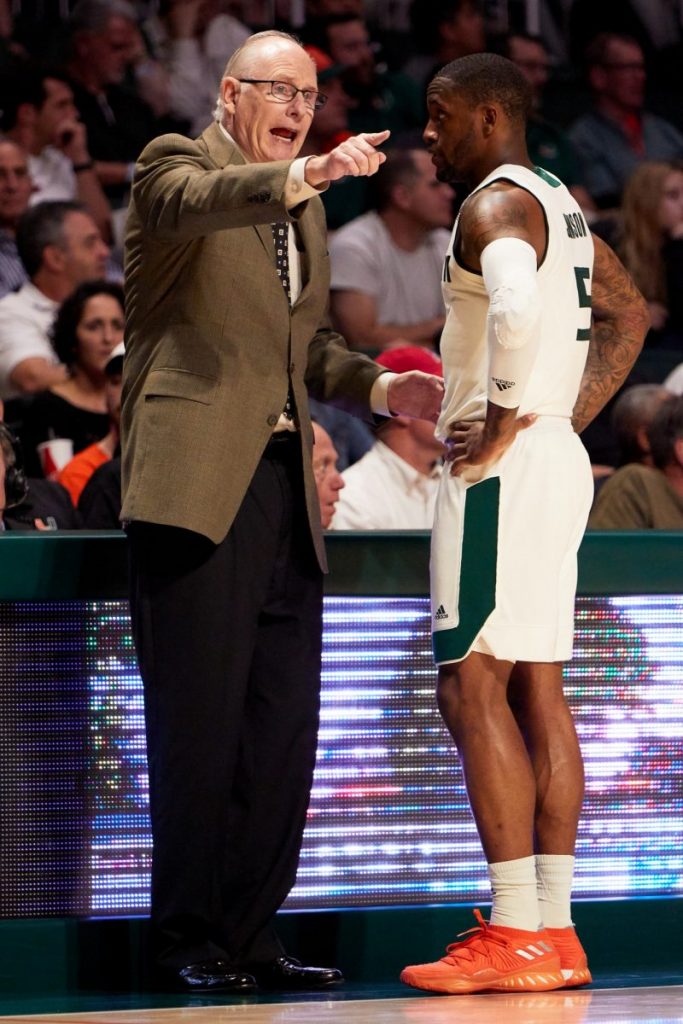 Miami has struggled mightily this season, but the Hurricanes picked up an 80-65 win over the Georgia Tech Yellow Jackets Sunday afternoon in Coral Gables.

“I’m very, very pleased with the victory,” Hurricanes coach Jim Larrañaga said. “Great defense in the first half, holding Georgia Tech to 23 points and scoring 39 ourselves. Guys really shared the ball in the first half. Second half, our defense the first six or seven minutes was not very good and gave them a chance to get back in it, but fortunately we played a lot better in the last 13 minutes and were able to come away with a terrific victory.

“We told Anthony Lawrence he was going to play a lot of point guard today,” Larrañaga said, because “Georgia Tech plays a zone” and places their defensive emphasis “on playing the passing lanes.”

Miami shot an impressive 89.5 percent from the free throw line. 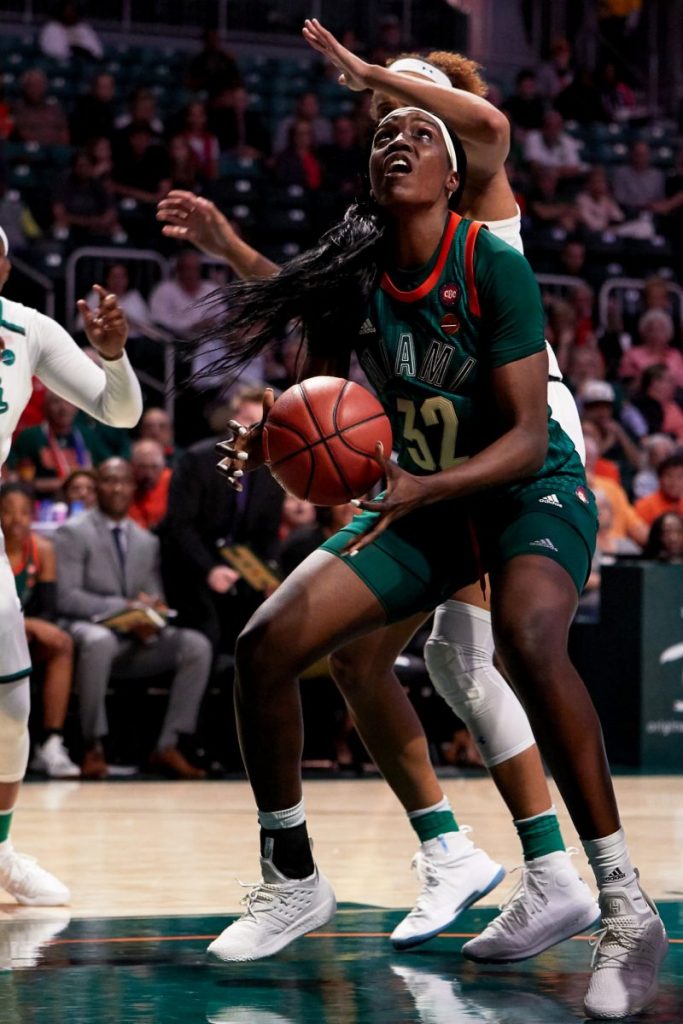 Beatrice Mompremier leads the Atlantic Coast Conference with 21 double-doubles. The redshirt junior forward is one of two players in the conference to average double-digit points and rebounds. Photo credit: Josh Halper

The Hurricanes have dominated the Hokies in the past, winning 15 straight games over Virginia Tech dating back to Jan. 24, 2010.

But on Thursday, Feb. 21, the Hokies stunned the No. 14-ranked Hurricanes 73-65 in Blacksburg, snapping Miami’s four-game winning streak.

The Hurricanes led for the majority of the contest, but the Hokies rallied around guard Taylor Emery. The senior finished with 24 points, including four 3-pointers.

The Hurricanes responded following their loss to Virginia Tech with a 14-point comeback victory over rival No. 22 Florida State, dropping the Seminoles 65-54.

“We fight,” sophomore guard Mykea Gray said, who led UM with 19 points. “That’s one thing I can say about our team. No matter how down we are at the moment, we always find a way to bounce back.”

The victory marked Miami’s first win over Florida State since 2012 and gave the Hurricanes their sixth win this season over a ranked opponent.

“I think a huge part for us was to get a little piece of ourselves back because we weren’t ourselves at Virginia Tech,” Hof said. “There’s a history with FSU, so regardless of whatever streak we had going on, it’s a part of pride…to know there’s that much history going on.”

The Seminoles led by two touchdowns early in the second quarter, but the Hurricanes answered with a 15-0 run, before controlling play the rest of the contest.

The Hurricanes (23-6, 11-3 ACC) will play their final home game of the regular season against the Georgia Tech Yellow Jackets 7 p.m. Feb. 28 at the Watsco Center.

The Hurricanes finished with five gold medals in the 2019 Atlantic Coast Conference Swimming and Diving Championships.

Redshirt junior diver David Dinsmore took the gold in the men’s platform event for the third time in his UM career.

Senior Briadam Herrera captured two gold medals in the meet. Herrera earned the top scores in both the 1-meter and 3-meter springboard.

The Hurricanes swept the Clemson Tigers, grabbing a 7-0 win at the Neil Schiff Tennis Center Sunday.

No. 24 Adria Soriano Barrera defeated Simon Baudry, 6-4, 6-2, to give the Hurricanes their first singles win of the day.

The Hurricanes will travel to Orlando to face off against the University of Central Florida Knights in the Tennis Channel College Match Day 10 a.m. March 3 at UCF Tennis Complex.

Duke started off strong with the first victory of the day with Margaryta Bilokin and Meible Chin beating Ana Madcur and freshman Lucia Marzal Martinez.

Then, Miami came back with two straight doubles victories and a singles win. Everything looked bright for the Hurricanes.

But miraculously, Duke came back to complete the win over Miami.

Next, the Hurricanes will face Pittsburgh 1 p.m. March 1 at Oxford Athletic Club.

The Hurricanes scored 91 points pushing them ahead of Florida State, who tallied 85 throughout the contest.

Senior Michelle Atherley won the ACC Indoor Pentathlon and claimed third place in the high jump. Atherley, who finished with 22 overall points and 16 in the field, earned 2019 Track Indoor MVP.

Miami clinched its victory with a 3:32.75 finish in the 4x400m relay, setting a new Championship record. The time ranks fourth in program history.

On the men’s side, junior Raheem Chambers broke a school record in the 60 meter, completing the race with a time of 6.62.