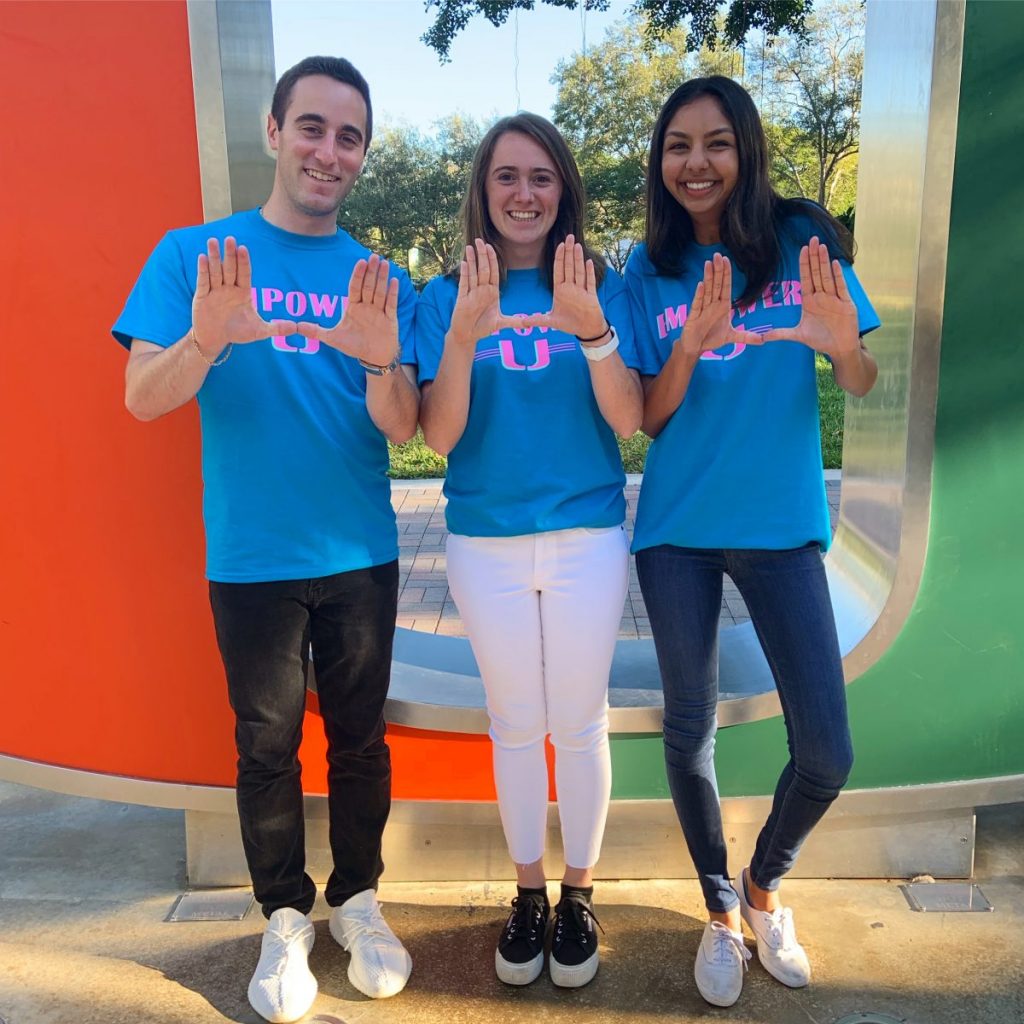 Members of the Empower U ticket, (from left to right) Jason Kaplan, Emily Gossett and Millie Chokshi, won last week’s Student Government elections, earning their respective spots as the next SG treasurer, president and vice president.

After one of the most highly-contested Student Government executive ticket races, Empower U emerged victorious.

Student Government election results were announced Friday, Feb. 22, on the Lakeside Patio after three weeks of campaigning and four days of OrgSync voting. Juniors Emily Gossett, Millie Chokshi and Jason Kaplan were voted in as the respective incoming Student Government president, vice president and treasurer, defeating the opposing ticket, The Switch Up.

This election had the highest voter turnout in the history of any UM Student Government election with 3,587 students voting. It was a close race– Gossett received 52 percent of the votes, Chokshi got 53 percent and Kaplan 51 percent.

When the results came out, Gossett, Chokshi and Kaplan said they were overjoyed.

“It was a surreal feeling,” said Kaplan about the moment he found out he won.

The road to victory was not an easy one. Empower U began planning its platforms last fall and had been working on it nonstop since.

Gossett spent weeks meeting with different student organization leaders to get multiple perspectives on what can be improved around campus. In the three weeks before the election, Gossett, Chokshi and Kaplan spent their time campaigning.

“We would palm card from 8 a.m to 5 p.m. It’s funny because class is literally my break during the day,” Chokshi said. “After that, we would go to meetings all night. That was definitely the hardest part because we were so busy.”

Overall, however, the process was a learning experience that the candidates from Empower U said they enjoyed.

“I think being able to meet so many new people and just create so many relationships were probably the best parts,” Kaplan said.

Gossett described the overall experience as grueling, yet rewarding.

“You kind of give yourself up for any type of public opinion. You have to be constantly alert and ready to talk to students,” Gossett said. “It’s so fun to interact with different people, but it’s also really draining.”

The candidates from the Empower U ticket will be initiated on April 9, marking the beginning of their term. Nonetheless, Gossett, Chokshi and Kaplan have already begun to plan out the year ahead.

First, Empower U plans on implementing applications for executive board positions. Its members also reported that they are starting to meet with administrators to get started on their other initiatives.

Empower U recognizes that it will face challenges throughout its term.

“We didn’t put anything on our palm card we didn’t think was feasible. Any roadblocks, we are going to try our best to get over them,” Chokshi said.

The Empower U leaders said they hope to have a transparent and engaging term as they focus on making SG a more welcoming organization.

Students around campus also expressed excitement for the upcoming year.

“I couldn’t be more excited to get to work with our newly-elected Student Government executive leadership,” said Randall Fitzgerald, a sophomore majoring in history, international studies, economics and political science.

“Both tickets brought up some great ideas and showed who we need to focus on as a university,” said sophomore Gianna Sanchez, a broadcast journalism major. “I hope that although only Empower U won, both groups can work together as student leaders to reach a wide audience and get a lot accomplished next year.”

Gossett, Kaplan and Chokshi said they would like to thank their campaign managers Gyles Ward, Keegan Gibson and Dana Franco and Student Government advisors Heather Stevens and Dean Ryan Holmes.

The full election results are listed below:

Alanna Cooper contributed to this reporting.

On the Smollett situation and post-truth sensationalism
Hurricanes claim victories across the board, suffer some losses