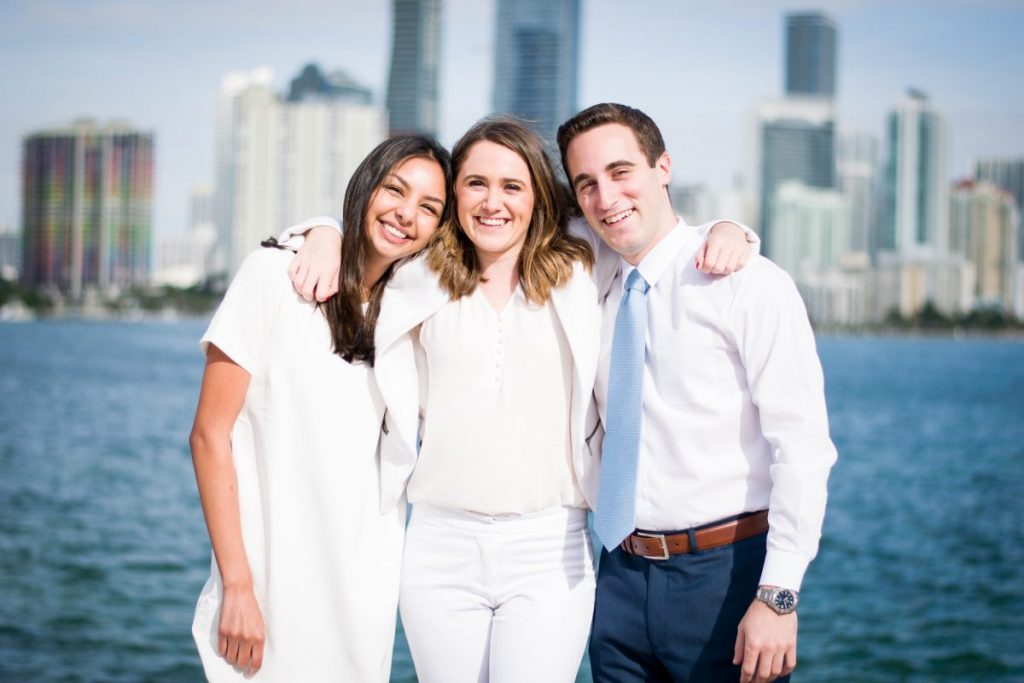 Gossett is a junior majoring in communication studies and sociology. She is a member of Zeta Tau Alpha, a program coordinator for the Association of Greek Letter Organizations, vice chair of Greek Week and chief of staff of Student Government. Gossett was on the planning committee for What Matters to U, which is the event that brought Bill Nye to campus, and was a part of a tailgate task force.

Chokshi is a junior majoring in public health and Spanish. She is the vice president of the Indian Student Association, a President’s 100 student ambassador, participated in the 2018 Homecoming Executive Committee, a member of the Phi Delta Epsilon medical fraternity and a project coordinator for Student Government’s Freshmen Leadership Council (FLC), which she has been involved in since her freshman year.

Kaplan is a junior majoring in accounting with minors in finance and management and is in the five-year accounting program at the Miami Business School. He is a member of Alpha Epsilon Pi, treasurer of Hillel and his current role in Student Government is director of communications.

One facet of this platform is to increase pay for student employees. While creating a base minimum wage will be impossible due to federal work study restrictions, Empower U plans to tackle this on a case-by-case basis.

Empower U also wants to implement digital cane cards on smartphones and reduce costs for Postmates during finals. To implement this, Gossett said that it’s all about allocation from dining or parking and transportation.

“You know when you get those discount codes from Postmates, it would kind of be like that for UM students, and it can even be a free delivery,” Chokshi said.

Support U in the Classroom

As part of this platform, Empower U wants to publish course evaluation data and establish a syllabus database, which they compared to an internal Rate My Professor.

“What we are looking to do is use that quantitative data and release it to students. You’d be surprised at how open professors are to this idea,” Gossett said.

To help reduce the amount students pay for textbooks, Empower U also plans to reduce costs by partnering with different digital publishers for better deals.

Empower U wants to provide two-ply toilet paper, add food trucks by the Panhellenic building and modify parking restrictions for student-athletes during practice. They said that none of this would cause an increase in tuition, and the money would come out of other sections such as facilities.

Prepare U for the Future

While there are already career fairs once a semester, Empower U would like to create a job fair with alumni employers only.

“I wish there was just one big universal job fair that wasn’t based on what school you were in or what career you wanted to go to where we would have alumni only coming,” Gossett said.

As for their idea of creating a fund for graduate school applications and interviews, Gossett said this is one of the hardest to implement, yet most important because there are so many students who cannot afford to pay application fees.

A Less Stressed U

The initiatives under this platform would overall bring more awareness to mental health issues and make the counseling center more accessible by expanding their hours and creating an online appointment system.

Care for Your Identities

Empower U wants to bring attention to the socio-economic diversity that UM has and create a food pantry where UM students can donate food to other students who may not have enough money for food.

“It’s something that really needs to be addressed,” Kaplan said.

As for their plan for gender-inclusive bathrooms, this is something that Empower U wants to include in any upcoming buildings on campus.

Finally, Empower U has three initiatives to try to connect and engage with students through creating listening tours, establishing a council for student organizations to collaborate and opening executive positions in Student Government to applications and interviews.

Ticket: The Switch Up 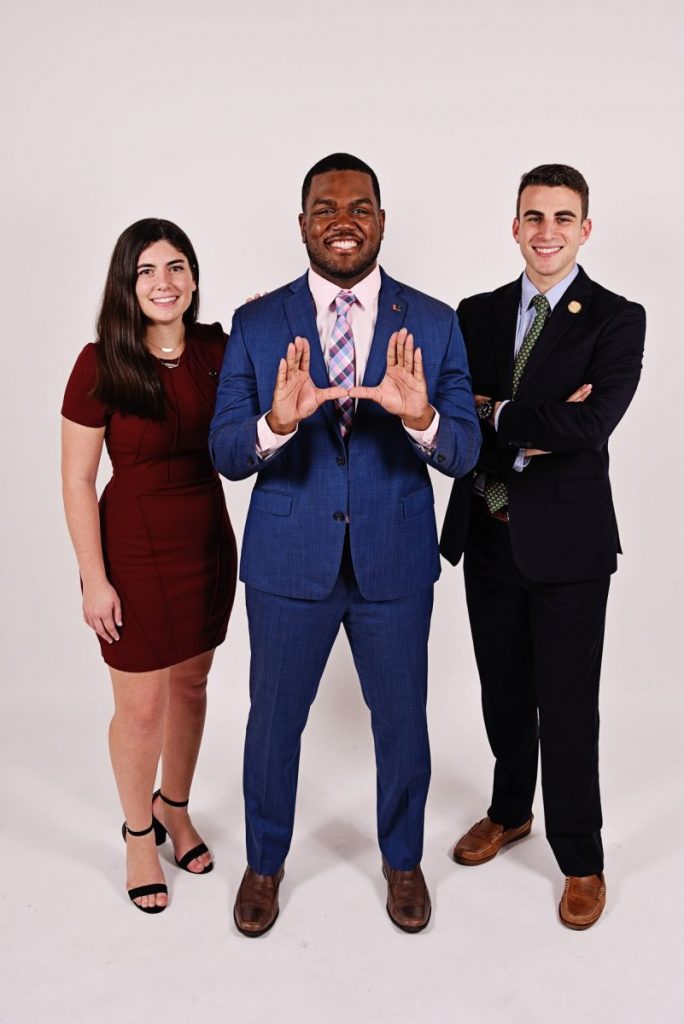 Washington is currently a junior majoring in finance with minors in accounting, public advocacy and business law. He is a part of the debate team, a member of the National Association of Black Accountants, a member of the exclusive Hyperion Council in the Miami Business School and a member in the business fraternity Delta Sigma Pi.

Grauer is a junior majoring in finance and legal studies with a minor in real estate. He is a three-time elect Student Government senator currently representing the Miami Business School, a founding member and one of the presidents of the fraternity Pi Kappa Alpha and vice president of recruitment for the Interfraternity Council.

Lynch is a junior majoring in legal studies and finance with a minor in public administration. She is the captain of the debate team, the vice president of chapter operations for Delta Sigma Pi, a mentor in the Foote Fellow class and was tapped into Iron Arrow.

Increase meal plan flexibility at on and off campus locations

There are two parts to this.

The first is aimed towards freshmen who have 150 dining dollars and are restricted to the dining hall, Pura Vida or The Market after their balance runs out.

“We want to come in and increase the vendors on campus that allows meal swipes that have special menu options where you can use your meal swipes,” Washington said.

As for off campus vendors, there are companies that help universities partner with other vendors to allow dining dollars.

“This will allow more variety for students off campus,” Washington said.

“I know a lot of people are worried about tuition. But it doesn’t hit the university as much as people might think. The way we’re going to do it, we’re putting it in the budget,” Washington said.

The Switch Up says this will be simple to implement and has already garnered support from students and faculty.

The idea behind this is to help with the language barriers between ride-sharing service drivers and customers.

“They aren’t able to navigate to tell them how you get through the university and drop you off at the dorm,” Lynch said, who personally experienced this.

The Switch Up explained that there would be multiple hotspots that students can click on in the app to select a drop-off location.

“We’ve pinpointed about 15 locations, and it puts a GPS targeted location instead of an address,” Lynch explained.

Currently, the Farmers Market contracts out to different vendors. The Switch Up would request tents to allow students to sell their items at.

“We thought that this would be a great way to showcase the entrepreneurial spirit of the University of Miami students and allow them to further their business in a market that already exists,” Grauer said.

This is a class that Juniors and Seniors have the option of taking to help their personal growth.

“We’re gaining academic growth, but how do you house-hunt, how do you do a mortgage, how do you pay off your student loans when you graduate? All these things that you don’t learn in school that are a necessity to life, it should be the responsibility of the university to cater for their students’ transition into the real world,” Washington said.

Because the Committee on Student Organizations already exists, The Switch Up plans on fostering a better relationship with them in order to bridge the gap between other organizations and Student Government, better serving the community.

Since the goal of parking tickets is not necessarily to make revenue for the university, The Switch Up wants to implement a set price for parking tickets that may go up if the student or faculty does not pay on time.

The Switch Up wants to increase the number of medical professionals at the counseling center, making it easier for students to make appointments. The Switch Up also aims to create different stations around campus to get people talking about mental health issues.

Voting is open from Feb. 18-21. Students can vote on orgsync.com and search student government elections, or they can vote at the rock from 10 a.m. – 2 p.m.