With bow in hand and piano at the ready, Mesa and Ivanchenko took to Beethoven with ease and enthusiasm. Akin to a puppeteer pulling the strings on a puppet, Mesa’s bow crisscrossed the hearty cello’s bridge to illicit mesmerizing melodies. As a true master of his art, Mesa would bend to every long note as he conveyed each crescendo with careful intricacy.

A colorful performer and personality, Mesa even coordinated lighting changes inspired by a New York performance by Donald Nally’s Crossing Choir, a Grammy nominated ensemble. The cellist mentioned that when given the chance, he would love to replicate the effect at his own recital.

“Gusman was the perfect venue for it— it has all the color you need for it.”

As the stage turned from yellow to blue and purple, Mesa brought Debussy’s melancholy and longing alive onstage with each stroke of his bow while the piano line imitated the soft sound of a snowflake flurry in the dead of night. The audience, receptive to Mesa’s masterful interpretation, breathed every bittersweet note he interpreted through his cello. There was no applause until the end of the first half of the program— a true testament to the cellist’s extraordinary ability to extend himself through music. It’s also the reason why he is quickly becoming established as one of the most versatile performers of his generation.

Versatile doesn’t even begin to cut it when one sees Mesa’s socks, however.

The chamber musician, who has soloed with the Cleveland Orchestra and toured internationally with Itzak Perlman deviates from most classical performers in many senses, but particularly in his choice of socks— ones of the rainbow-striped variety. 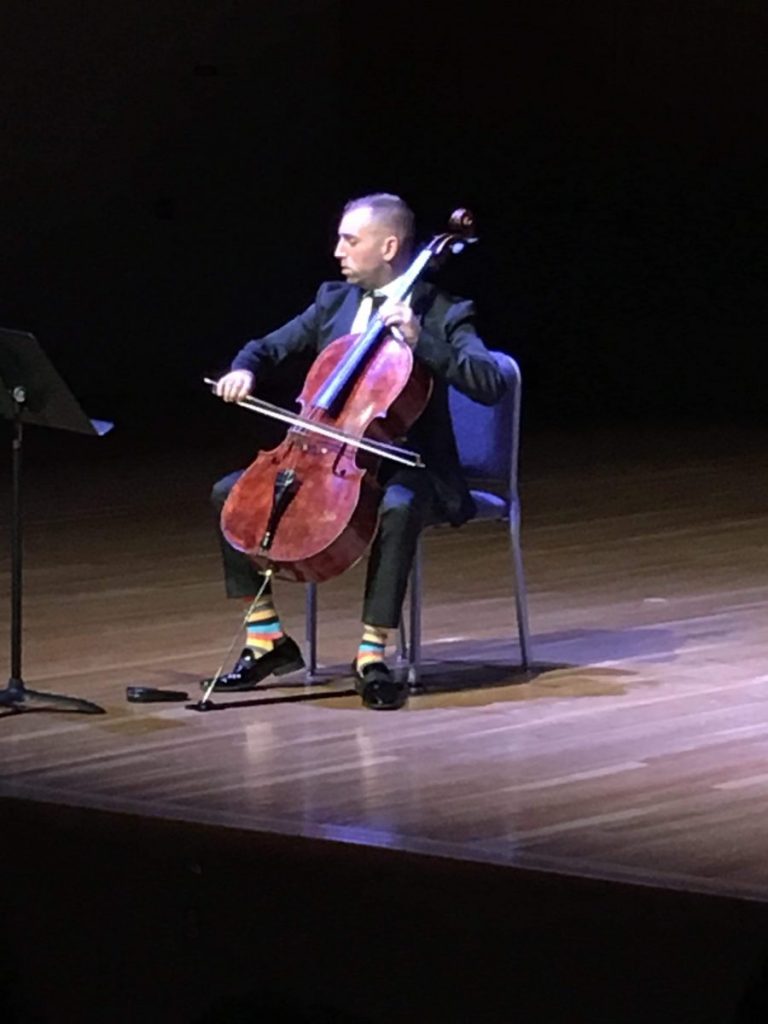 But Mesa continued to surprise the audience as the concert progressed into the second half of the evening, featuring Rachmaninoff’s Romantic “Sonata in G minor” as he begins to vocalize— a pure and clear tone in perfect tune with the cello.

Mesa, a Cuban-American and Miami native now based in New York, put together a program featuring works by Beethoven, Debussy, Schumann and Rachmaninoff. In a program highlighting the romantic and heart-tugging qualities of a cello’s vibrato. Mesa explained that the four movement Rachmaninoff piece, “Sonata in G minor”, was the inspiration behind #CelloLove.

“It’s all about Romanticism. It’s about loving the sound of the cello and the piano,” he said.

The main purpose of music from the Romantic period, which lasted from the 1780s until 1910, to pay tribute to the expression of emotion— a message that clearly motivates Mesa’s intimate and endearing tango with his cello.

Katrina Burkhardt of South Miami, a frequent Frost concert attendee and fervent arts supporter, said she couldn’t help but notice how much a cello can tug on our heartstrings— especially when someone like Mesa pours his heart out to the audience.

“With the cello, your heart can always take flight,” she said.

Mesa ended the concert by inviting the Frost cello ensemble onstage to play Astor Piazolla’s tango-esque piece “Oblivion,” a crowd favorite featuring deep vibratos and gripping lines characteristic of many romantic tango instrumentals. “Oblivion” teetered between the red-hot passion of two lovers in a tango and the bitter edge of their love lost.

The command of the 11 cello ensemble earned them a standing ovation.

Use of dating apps becoming more prevalent among students
Songs For Lovers and the Broken-Hearted: a Frost celebration of Valentine’s Day