Home » Longtime usher gears up for another baseball season

Longtime usher gears up for another baseball season 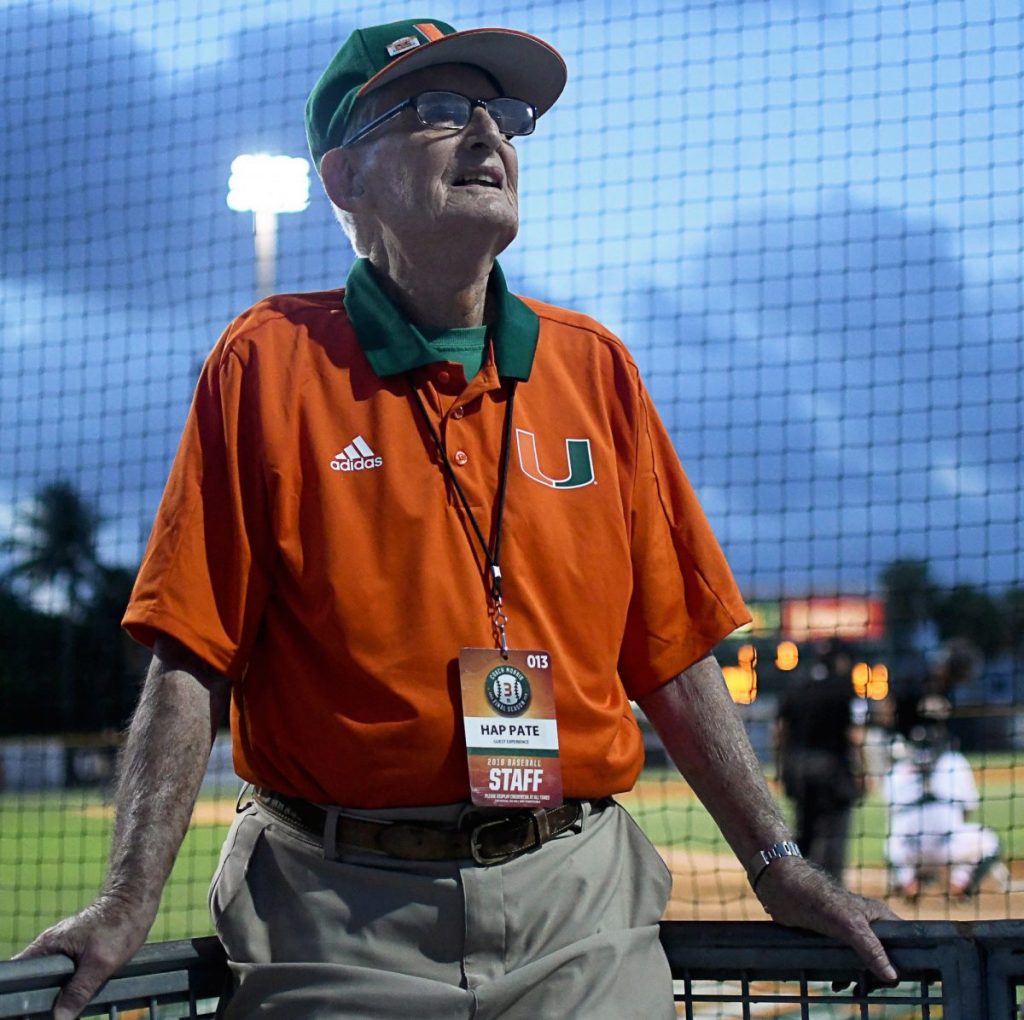 On the corner of Ponce de Leon Boulevard and San Amaro Drive, the atmosphere at Mark Light Field is special.

From the famous milkshakes to the Miami Maniac and the superstitious Mark Light Magic, the environment is invigorating.

The energy stems from the screeching calls of “siéntate” after each strikeout and the lifers who have not missed a home game in decades. And of course, children and their parents filling in the lineup on their scorecards paints the stadium in a sea of orange and green.

Through all the chaos and traditions at The Light, there are legends who stand out amongst the pack.

Hall of Fame coach Ron Fraser is simply known as the “Wizard.” Jim Morris, who leads the program in all-time wins, is endearingly referred to as “3.” Longtime public announcer Jay Rokeach is commonly called “JayRo.”

But there is one man who has been making an impact at the University of Miami for more than 60 years who still flies under the radar.

At first glance, Hap Pate appears to be your average staffer at the ballpark.

But Pate, 87, is very different from the other employees.

Donned in his standard uniform of a UM polo and cargo shorts, accompanied by the classic “old man” outfit of high white socks right below the knee cap, Pate has scanned the field level concourse for decades patrolling Reserve Sections A through C with his silver white hair peering out of his baseball cap embroidered with a ‘U.’

“I have enjoyed working at Mark Light Field all 35 years,” Pate said, who got his start at The Light as an umpire. “I have enjoyed the people I have worked with. We have gone from friendly to friends.”

And the people have certainly enjoyed him.

“Hap is a very, very outgoing person,” said Richard Naue Jr., who is one of Pate’s fellow guest-experience representatives. “He has a wealth of knowledge and the fans love him. I think he has his own fan club here.”

“He is one of the best people I have ever met,” Palmer Luro said, who has had Hurricanes baseball season tickets for more than 25 years. “He is very personable and gives me an extra reason to come to the ballpark.”

Yet, Pate’s love for UM runs much deeper than his work at baseball games.

Henderson Alton Pate, better known as Hap—which he has been called for as long as he can remember—was born in the mountains of Wheeling, West Virginia in 1931.

Pate played a variety of sports—including baseball, basketball and football—growing up as a kid in Roanoke, Virginia, where his family moved in 1932.

And sports may in fact have saved his life.

When Pate was 17-years-old, he and his friends were horsing around with a pistol. What seemed like harmless fun quickly turned into something scary.

Pate’s childhood friend shot him in the side of his torso, just missing his ribs and organs. The doctor told Pate that since he was in very good shape he avoided a major scare. At the time, Pate, or as he liked to call himself, “Superman,” could do 200 sit-ups and 100 pushups.

“If I had not been involved in sports, I might have been killed,” Pate said. “The Lord has blessed me in that regard as well. I have been very fortunate that I have been in good health for 87 years. So many of my friends from high school are gone. In fact, at the last class reunion, one of my best friends said ‘Hap, one day we are going to be the only two here.’”

Pate graduated from high school a semester early and enlisted in the Marine Corps before transferring to the Air Force in Jan. 1951.

While stationed in Tripoli, Italy, more than 4,700 miles away from his home, Pate found his true passion.

He auditioned for the Armed Forces Radio Network and got airtime as a DJ to entertain the troops. Known as Hap Henderson on the air, his appetite for broadcasting continued to develop.

“He was perfect for radio because the man is a very high energy person,” Pate’s youngest son, Gary said. “Even at 87 years old, he can outwork most other people. He has always been that way.”

After being discharged from the Air Force, Pate came to UM in 1954 as a radio-television-film major with a minor in sales and marketing.

Yet, his connection to the Air Force remained. He was part of UM’s Air Force ROTC program and even garnered honors as a Wing Commander.

Pate helped establish Miami’s intramural program alongside Norman Whitten and Jack Kelley, while also balancing a rigorous course load and completing his 120 credits in three years instead of the standard four.

Pate’s 3.4 GPA and involvement in extracurricular activities, including being president of the Sigma Alpha Epsilon fraternity, earned Pate an induction into the Omicron Delta Kappa National Leadership Honor Society.

“I was surprised anytime anything like this happened,” Pate said. “Every time I would earn another honor, I did not expect it to happen.”

But academics weren’t the only reason why enrolling at UM would prove to be integral to his life.

Pate, a devout Christian, attended Sunday mass at Miami. At the service, he saw a woman who would forever change his life.

Pate and Nancy Chivers dated for four years before getting married on March 29, 1958.

“Nancy is the love of my life,” Pate said. “She and Jesus Christ are my best friends.” He and his wife celebrated their 60th anniversary last year with a seven-day cruise.

“He is very happy. His name suits him perfectly,” Nancy said. “He is a very fine man and he has been a good husband, and a good father. He has worked hard to take care of us all these years.”

Upon graduation, Pate landed an on-air job with WQAM after interning with the station his senior year as a “roving news reporter.”

Pate climbed the corporate ladder at the station and became the sales manager before eventually being named vice president and ultimately general manager.

“As a sales manager, I would tell my sales people ‘the people you call, may not want to buy your product, but they may want to buy from you. Sell yourself, not the product,” Pate said, who worked 35 years in the radio business.

There has been no seventh inning stretch in Pate’s lifetime.

He has worked as the official clock operator for the Miami Dolphins when they opened up the Orange Bowl, called balls and strikes at Miami Stadium for the Marlins when they were a semi-pro club and has even worked multiple Hurricanes track and field meets at Cobb Stadium over the years.

Nowadays, when he is not at the ballpark, Pate is constantly reading mystery novels by John Grisham and David Baldacci. He has finished all 13 books by Baldacci and is nearing the end of his Grisham collection.

During the summer and fall, Pate resides in North Carolina, a place that he said reminds him of his childhood home.

“Our North Carolina friends like to tease and call us ‘flatlanders’ for living in Florida half the year,” he said. “But I love UM too much to not come down in the winter.”

For as long as he can, Pate said he will continue to ride out his ninth inning and bring joy to the fans at Mark Light Field.

“I look forward to every game. Hopefully I can do this for another 35 years,” Pate said.

Pate will begin another season at his second home when the Hurricanes host the Rutgers Scarlet Knights on Feb. 15. First pitch is scheduled for 7 p.m. 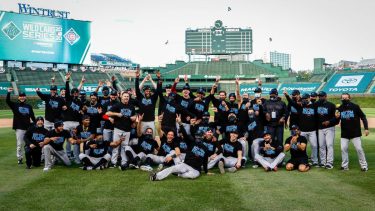