Home » Hurricanes off to best start since 2008

Hurricanes off to best start since 2008 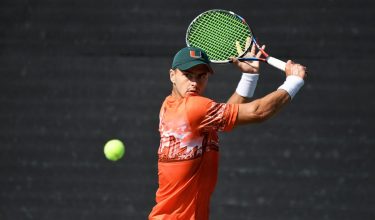 From the first serve to the last point, the Hurricanes dominated the Owls at the Neil Schiff Tennis Center. Miami outplayed Florida Atlantic University (FAU), picking up a convincing 6-1 win on Monday afternoon to remain unbeaten.

The Hurricanes trailed 1-0 in doubles’ matches, but the sophomore duo of Bojan Jankulovski and Adria Soriano Barrera answered with a 6-3 victory over Gabriel Sidney and Kirac Bekisoglu.

Moments later, Dane Dunlap and Stephen Madonia teamed up for a 6-4 win against Mehdi Laalej and Thomas Guy to give UM momentum riding into singles action.

“Stephen and I had a lot of energy,” Dunlap said. “We had an early break, and at the end, we just played solid and served it out. It was a good feeling to be able to clinch that because FAU is a good doubles team.”

Miami continued to roll over the Owls in singles play.

After notching a doubles victory earlier in the day, Dunlap—playing at the No. 4 singles spot—overcame a second set loss to Laalej to win in tie-breaking fashion, 6-1, 2-6, 1-0 (10-3).

“The doubles win gave me confidence, knowing today I’m playing well,” the redshirt junior from Canada said. “I started really well in the first set, second set I let it get away from me mentally, but I didn’t lose confidence in my game and I think the doubles helped that.”

No. 35 Jankulovski trailed in his first set, but won three straight games to take the opening frame in his singles match. The Macedonian had an easier time in the second set, riding an early break to a 7-5, 6-2 win over FAU’s Kirac Bekisoglu.

“I tried to be more aggressive with my game,” Jankulovski said about his adjusting after the first few games. “I felt like my opponent’s intensity went down in the second set.”

FAU gave UM a fight in the final match of the day.

The third set, represented by a tiebreaker to ten points, per NCAA rules when one school already has the match clinched, saw both players receive match point opportunities before FAU registered its point of the day.

“It’s imperative in a college environment to have a cohesive unit,” Piric said. “We talk about our guys supporting one another, cheering one another, feeding off one another. I think it’s a learned skill and our guys embrace it.”