Home » Basketball falters as semester nearing a close, records broken in the water

Basketball falters as semester nearing a close, records broken in the water 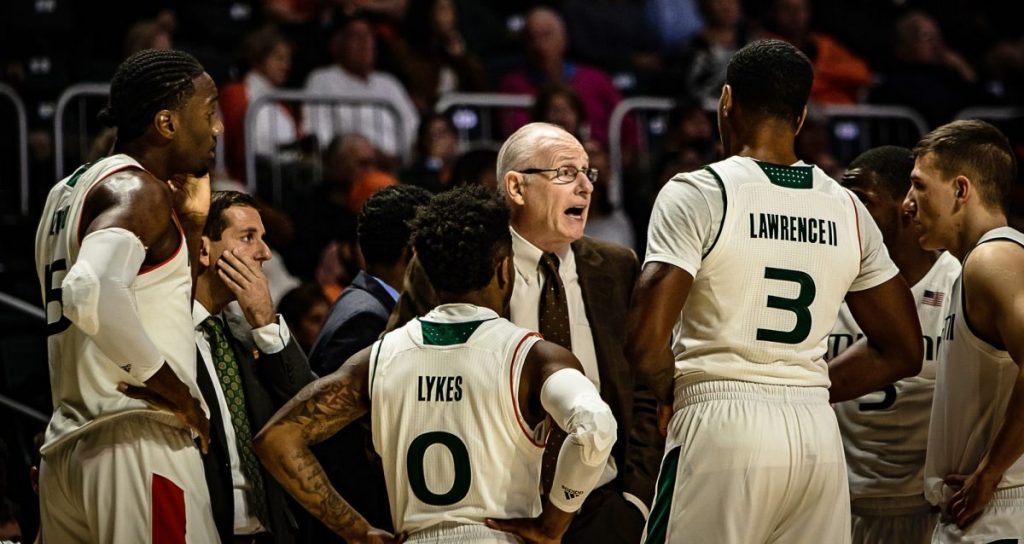 After falling to Seton Hall in the Wooden Legacy Championship, the Hurricanes extended their losing-streak to three games.

The Rutgers Scarlet Knights defeated the Hurricanes 57-54 Wednesday, Nov. 28 at the Watsco Center as a part of the ACC/Big Ten Challenge.

Ebuka Izundu started off the contest strong notching his third double-double of the season with 12 points and 12 rebounds. However, the senior center battled leg cramps and left the game early.

“Our energy level was sapped…The flight over to California was 3,000 miles, the flight back was 3,000 miles, we played three games over four days out there and we have only seven guys,” Hurricanes coach Jim Larrañaga said. “We could have used Anthony Mack tonight, but he was sick and unable to be at the game. Without Ebuka down the stretch, we didn’t have an inside game. Our guys could all use a break to rest and recover, but we just don’t have the bodies.”

“We didn’t have energy as a team, and mentally we were not there, either,” Lykes said. “We have to regroup. Coach told us at halftime we have to pick up our energy. We were lethargic, turning the ball over a lot. As a point guard, I have to be better than that. That’s on me. My responsibility. I can’t have five turnovers in one half.”

Saturday evening, the Hurricanes were upset by the Yale Bulldogs 77-73 at in the Hoophall Miami Invitational at the AmericanAirlines Arena.

Miami squandered a 15-point lead and ultimately failed to score in the final 3:21.

“We couldn’t guard him,” Larranaga said of Oni. “We’ve actually had a very hard time in every game guarding the other team’s best player. We just haven’t had a guy step up and stop a guy like that.”

The Hurricanes will look to get back in the win column against the Penn Quakers 7 p.m. Dec. 4 at The Palestra.

The No. 21 Hurricanes were able to split a pair of game against the Purdue Boilermakers and the Colorado Buffaloes.

Miami lost its second road game of the season, losing 74-63 Thursday, Nov. 29 to Purdue in West Lafayette, Indiana as part of the ACC/Big Ten Challenge.

The game came down to details of fouling a jump-shooter, which is a big no-no in basketball,” Hurricanes coach Katie Meier said. “Someone on your team is going to have to play really special off the scouting report performance to beat Miami and Dominique Oden did it.”

Oden scored a career-high 27 points for the Boilermakers and hit six shots from behind the arc.

Senior Emese Hof tallied her second double-double of the season, recording a season-high 25 points and 14 rebounds.

“I think she was determined,” Meier said of Hof’s performance. “She cares so much about this team, so I don’t think she had any idea how well she was playing. She just knew we were struggling offensively and she wanted to help Miami.”

The Hurricanes bounced back with a dominant 73-58 win over the Buffaloes Sunday, Dec. 2 at the Watsco Center.

Guard Laura Cornelius made four 3-pointers in route to a career-high 26 points in the victory.

She’s got to impose her will on the game at all times that she’s in,” Meier said of the redshirt junior. “In this game, I thought her reads off the ball screens were phenomenal.”

Miami (7-2) will continue its home stand against the New Orleans Privateers 1 p.m. Dec. 9. at the Watsco Center.

The Hurricanes scored 467 points at the Bruno Invite on the Brown University campus.

Miami was led by freshman Zorry Mason, who finished with three victories, including a school-record in the 200-yard IM twice. Mason’s official record-breaking time was 1:58.92.

The Hurricanes will compete at the USA Diving Winter Trials from Dec. 16 to Dec. 21 in Atlanta.