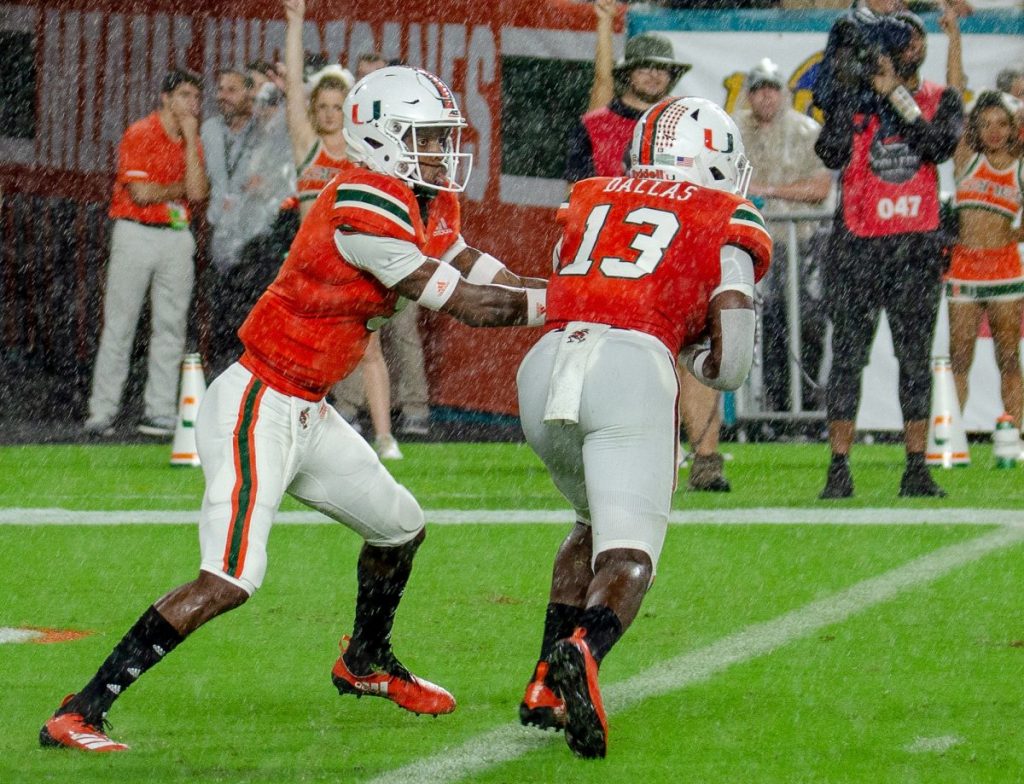 Things have gone from bad to worse for the Miami Hurricanes.

The Hurricanes kicked off the season ranked as one of the top-10 teams in the county and won five of their first six games.

But, since, Miami looks like a different program. After dropping four consecutive contests, the Canes are in jeopardy of failing to secure bowl eligibility in a non-NCAA sanction year for only the third time since 1983 when Miami won the first of its five national championships.

With just two regular season games remaining against Virginia Tech and Pittsburgh, Miami’s focus has shifted to qualifying for the postseason.

“Our plan is to get the senior to a bowl game,” junior linebacker Shaq Quarterman said. “It’s that simple. They’ve worked extremely hard. These are the last guys that were recruited by [Al] Golden and they’re owed that much. So we’re going to continue to play hard the best we can for them. That’s all we can do.”

While the Hurricanes’ season is all but lost, a bright spot has emerged.

N’Kosi Perry continues to develop under center. The redshirt freshman finished 14 of 23 for 165 yards against the Yellow Jackets. While the numbers don’t jump off the page, Perry flashed potential.

The 6-foot-4, 195-pound quarterback led the Hurricanes to a touchdown on their opening drive for the first time since Sept. 15 against Toledo and then orchestrated Miami’s first second-half points since Oct. 13 against Virginia with a 15-play, 95-drive in the fourth quarter.

“I just think he threw the ball with a lot of confidence and was very on point,” Richt said. “When there was somebody open, he put it on them…Maybe it’s just the look in his eyes sometime. You can tell when a guy is very comfortable in this role and he certainly was on point with his reads and progressions and throws. He made some tremendous third-down conversion throws, one to Jeff Thomas on the sideline and one to Dee Wiggins down the middle that was an NFL-type ball. The kinds of throws that had to be made at crucial times and he made them.”

Although Perry’s growth showed, the Hurricanes appeared to regress.

Miami’s offensive line was flagged four times for a false start, freshman Mark Pope was whistled for a block below the waist and redshirt junior Lawrence Cager dropped a crucial ball on the final drive that would’ve moved the chains.

Yet, Perry and his teammates haven’t quit on each other and the Hurricanes’ coaching staff.

“The unity we have together, we’re a family,” Perry said. “We’re a team. And once we get it clicking on offense, defense and special teams at the same time, we can be unstoppable.”

The Hurricanes will look to avoid their fifth straight loss when Miami travels to Virginia Tech Nov. 17. Kickoff is slated for 3:30 p.m. at Lane Stadium.

“Just sad, angry pretty much,” Thomas said of the mood in the Hurricanes’ locker room. “I think we still have a lot of motivation. We’re a team. We’re not going to give up on each other.”