The Miami Hurricanes tipped off their season with three straight victories.

Redshirt junior Beatrice Mompremier recorded a double-double in her first game as a Hurricane, securing 14 points and 12 rebounds.

Then, Friday, Miami kicked off the WNIT Preseason Tournament with a win over the Stephen F. Austin Ladyjacks, 81-60, at the Watsco Center.

Sophomore Mykea Gray was dominant, tallying 25 points on 9 of 15 shooting. As a team, Miami shot 9 of 16 from beyond the arc, including a 53.3 percent clip in the first half.

The Hurricanes rounded out their perfect 3-0 start Sunday with a, 75-62, victory over the Hartford Hawks.

“Endia Banks, to me, was player of the game, especially with the courage she played with,” coach Katie Meier said.

UM ended the third quarter going 11 of 15 from the field.

“It’s something that I haven’t had a lot of,” said Meier, on having two prominent forwards. “They were heroic with their rotations. If I was a shooter, I wouldn’t want either one of these two running at me.”

The No. 24 Hurricanes host the No. 19 Marquette Golden Eagles in the semifinals of the WNIT Preseason Tournament 7 p.m. Thursday at the Watsco Center. 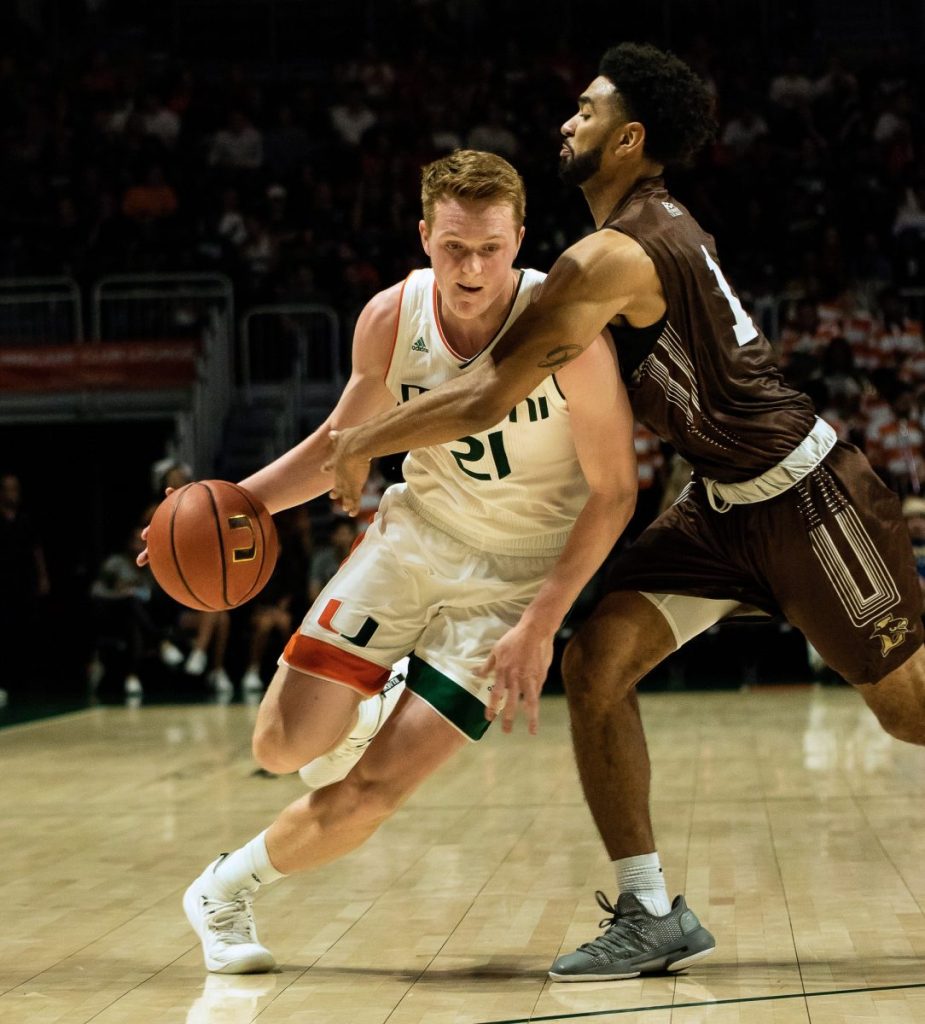 Less than a half an hour before tipoff, the Miami released a statement saying junior Dewan Hernandez will be withheld from competition due to concerns over his eligibility. Yet, the Hurricanes still put on an offensive showcase without their returning leading scorer.

“I feel a lot more comfortable with these guys,” the 5-foot-7 guard said. “They have trust in me, the same way I got trust in them. Coach L’s offense, you know, it is pretty simple. It moves the ball and shares the ball. We get each other open.”

“I try to be a leader every day, in practice, on and off the court, just telling guys basically to just be ready for the game, be prepared, don’t come out playing around,” the senior guard said. “At practice, don’t play around. Take it seriously, take everything serious; film, all that.”

Miami will face off against the Stephen F. Austin Lumberjacks 7 p.m. Tuesday at the Watsco Center.

UM started off strong, winning the first two sets over the Wake Forest Demon Deacons, but the Hurricanes couldn’t hold their lead.

Kolby Bird led the Hurricanes with a season-high 18 kills in the defeat. Outside hitter Elizaveta Lukianova recorded five kills in the first set, but faltered from there, only tallying three kills the rest of the way.

Lukianova bounced back with 16 kills and three blocks, while freshman Chloe Brown notched 10 kills, three service aces and one block.

Miami will try to snap its four-game losing skid against the Pittsburgh Panthers 1 p.m. Sunday at the James L. Knight Sports Complex.

Adria Soriano Barrera reached the quarterfinals of the ITA Fall National Champions before coming up short against Oregon’s Thomas Lauren, 6-7 (1-7), 5-7. Soriano Barrera recorded an 8-4 mark in the fall, including a finals appearance in the ITA Southeast Regional.

In Texas, the Hurricanes clinched two back draw titles at the Longhorn Invitational.

No. 2 seed Estela Perez-Somarriba fell 3-6, 2-6 to UCLA’s No. 13 seed Elysia Bolton in the round of 16 at the Oracle ITA National Fall Championships. It was just Perez-Somarriba’s second straight set loss in 2018.

The junior capped off her fall season with a 12-2 record, including a 6-1 mark against ranked opponents.

Miami closed out its 2018 campaign at the NCAA South Regional.

Abby Kittle was the first of six Hurricanes to cross the finish line with a time of 23:25 in the women’s 6K Championship.

Sophomore Dylan Sykes was the only member of the men’s team represented at the event. Sykes finished his first 10K of the year with a time of 32:25.

The Hurricanes wrapped up their fall season with a scrimmage against the University of Central Florida Knights.

In the 1V8+ competition, UCF took first and fourth place, while UM secured second and third.