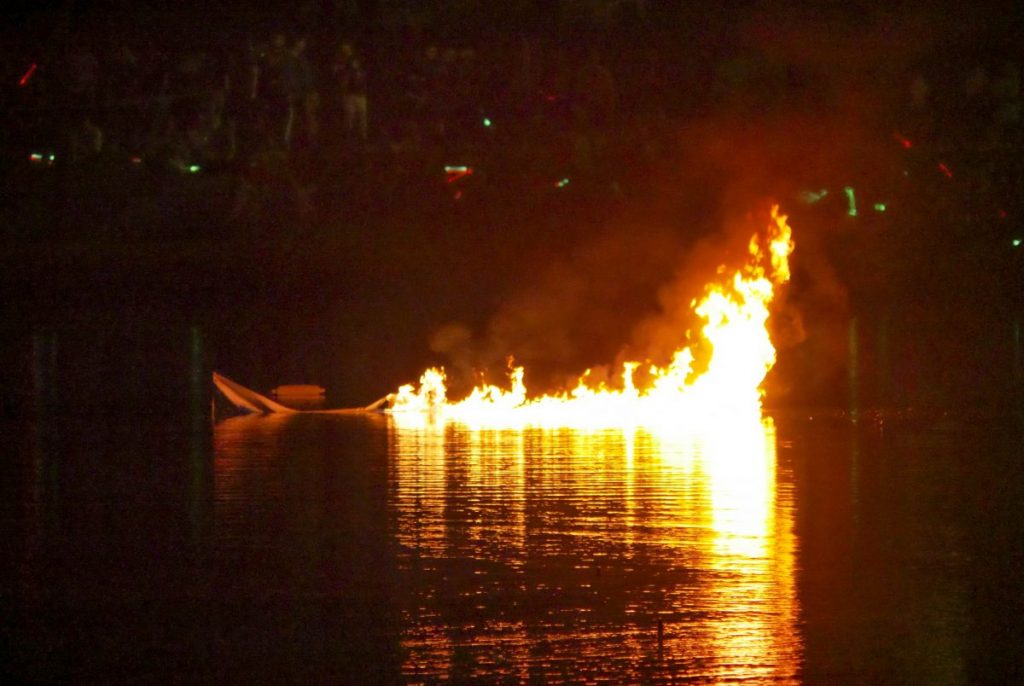 The University of Miami's annual "Boat Burning" tradition kicked off the fireworks show for Homecoming's Hurricane Howl Friday night that took place on campus. The boat burning is a tradition that is supposed to symbolize whether the Hurricane's will defeat their opponents the following day if the boat sinks into Lake Osceola by the end of the ceremony. Photo credit: Cameron Tavakoly

Fireworks illuminated the sky above Lake Osceola on the night of Nov. 2 during the University of Miami’s annual boat burning ceremony.

Students, faculty and alumni stood around the lake, waving green and orange glow sticks in the air and making it seem as if there were fireworks dancing along the edge of the water. Smiles radiated throughout the crowd of spectators, reflecting the glow of the fireworks hanging overhead.

UM’s Hurricane Productions distributed special 3D glasses that refracted the light of the fireworks into the very recognizable letter “U.”

“I was happy,” said freshman biochemistry major Jack Sleeman, reflecting on his first homecoming experience at UM. “I liked seeing the fireworks, and the 3D glasses were sick. I’m going to keep those forever.”

Just before the first firework went off, a small boat floated in the center of Lake Osceola. A flag hung from its mast with a large, blue “D” painted in the center, representing UM’s rival in this year’s homecoming football game, Duke University. Legend has it that if the mast falls before the boat sinks beneath the water, UM will defeat its opponent in the game. After a dramatic explosion set the boat ablaze, the mast quickly collapsed before the rest of the boat subsequently sank.

Aloki Patel, a sophomore double majoring in biology and criminology, said the boat burning and fireworks festivities are some of her favorite UM traditions.

“The exhilarating fireworks always lighten my mood and leave me with a refreshed perspective and a happy feeling,” Patel said. 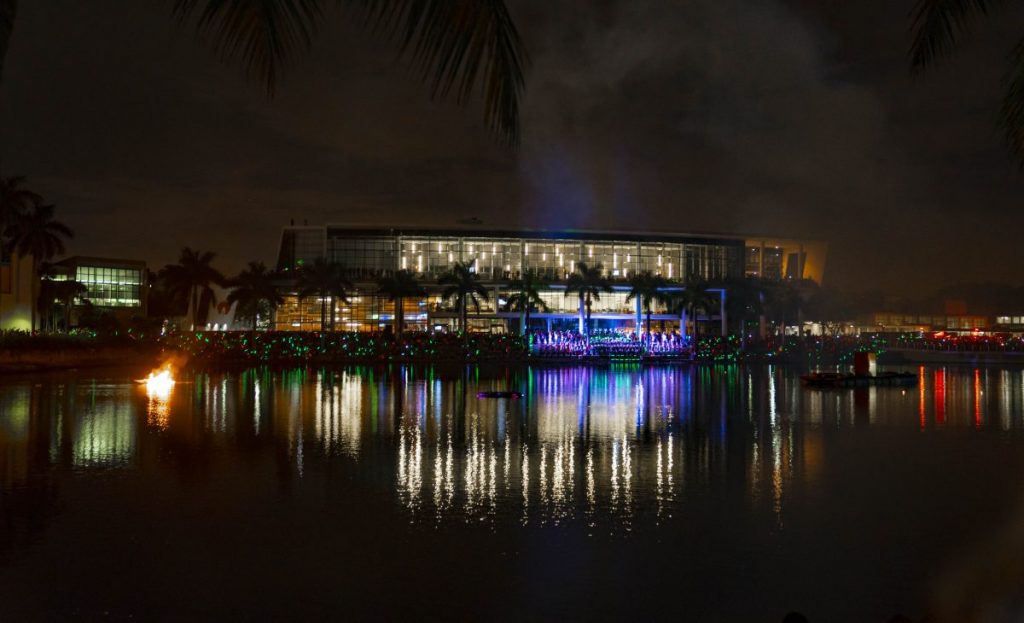 The iconic annual tradition of setting a boat on fire to predict the fate of the homecoming football game began in 1956 and has since become one of the most cherished and memorable events in UM history.

“Papito” Perez, 81, an alumnus originally from Puerto Rico who graduated from UM’s College of Engineering in 1961, recalled the first time he saw the boat burning in 1957, just one year after the tradition was established. He said he felt that the emotion and great spirit of the event were still as alive as ever.

“Seeing everyone here celebrating what it means to be a Cane brings me back to my younger days,” Perez said in Spanish. “I love it.”

A member of the ROTC during his time at UM, Perez remembered participating in other homecoming festivities such as the parade, where he would ceremoniously flip flags in the air for viewers to marvel at.

“I think the fact that this tradition is so old goes to show how UM has been unique for so long,” said freshman Kira Quintana, who said she also thoroughly enjoyed the ceremony.

“We got to come together as one community and student body,” said Austin Lent, a freshman majoring in health science. “It was a really good bonding experience for everyone.”