Home » Hurricanes with high hopes ahead of tipoff

Hurricanes with high hopes ahead of tipoff 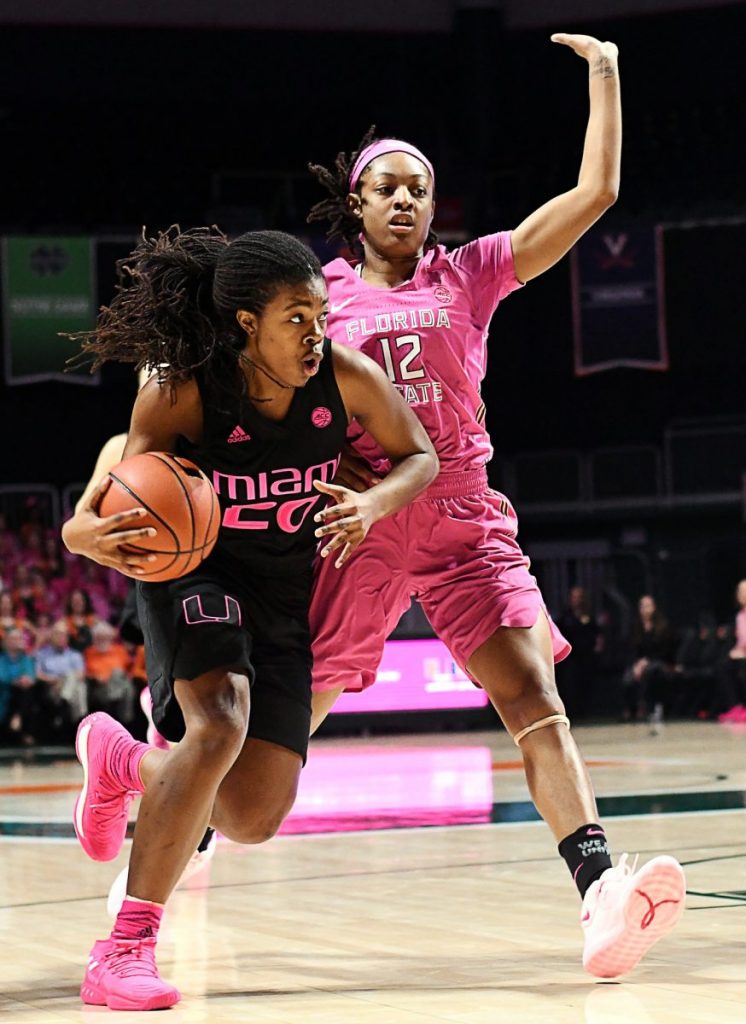 Miami Hurricanes guard Kelsey Marshall drives toward the basket against the Florida State Seminoles Feb. 11 at the Watsco Center. Marshall finished with 10 points in the contest. Photo credit: Josh White

The standard has been set.

Katie Meier and the Miami Hurricanes have reached the postseason in nine straight years, including an appearance in the NCAA Tournament seven times in the last eight seasons.

No. 25/24 Miami, ranked in both major polls to open the season for the second time in three years, is set to tipoff its 2018-19 campaign with expectations as high as ever.

“I love to play with pressure,” said guard Laura Cornelius, who missed last season because of a torn ACL. “I think we deserve to be ranked. Expectations should be high. It’s up to us to live up to them. I really take that challenge and I think we’re all up for that challenge. I think we can do some really special things this year.”

And while Cornelius and Khalia Prather didn’t make a direct imprint on the floor as much as Meier would’ve liked, their impact off the court was immense.

“If I ever write a book or whatever, there will be a chapter on the best leadership I ever witnessed in my coaching career,” Meier said. “I never ever have seen better leadership in my life. I was stunned by it. I was emotional every time I saw them doing it…It was the rock for why we overachieved last year.”

With the return of the Hurricanes’ career three-point percentage leader and Prather, who is expected to be sidelined for the beginning of the season, Meier is excited given her team’s experience.

“It’s fun to have veterans who are fresh and hungry,” Meier said. “We have some veterans who were on the bench last year, injured in sweat suits or sitting out their transfer year, and they’re bringing a freshman like excitement and enthusiasm.”

While Cornelius and Prather battled injuries last year, former Baylor Bear Beatrice Mompremier sat out due to NCAA transfer rules and is expected to anchor the Hurricanes’ play down low.

“She is as special as advertised,” Meier said of the 6-foot-4 forward. “She has a different level…and then it’s time to compete, she’s off the charts competitive in a very quiet way. When the lights are on and it’s time to win, she’s got the guts.”

The Atlantic Coast Conference Preseason Newcomer Watch List honoree is poised to join a group which had just six of their 12 players compete a season ago.

“I’m expecting us to have a good run and win way more games than last season,” the former top-15 recruit said, who averaged 7.7 points and 6.3 rebounds in two years at Baylor. “I always told myself if I end up transferring, I would come back home. It’s a great experience knowing that my parents and siblings can come to the game.”