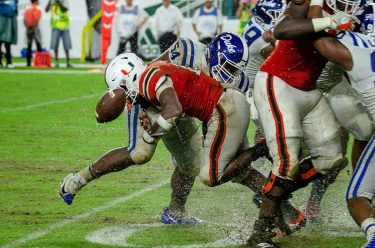 Sophomore running back DeeJay Dallas fumbles the football against Duke Nov. 3 at Hard Rock Stadium. Dallas turned the ball over twice in the contest in the Hurricanes’ 20-12 loss against the Blue Devils.

The Miami Hurricanes battled adversity right from the kickoff.

Duke’s Deon Jackson bolted down the sideline for a 75-yard rushing touchdown on the first play from scrimmage to put the Blue Devils up 7-0.

And then the sky opened up, painting brush strokes of brown mud patches across the field, diverting the Hurricanes from what seemed like another audition for quarterbacks Malik Rosier and N’Kosi Perry.

Miami relied on its ground-and-pound attack, but the Blue Devils capitalized on the Hurricanes’ second-half miscues to win 20-12 Saturday evening at Hard Rock Stadium.

“It’s becoming too common to congratulate the opponent first,” UM coach Mark Richt said. “I don’t have a lot of really good answers right this minute. Certainly I’m sure you all have a lot of questions.”

The loss all but ended the Hurricanes hopes of defending their Atlantic Coast Conference Coastal Division title. Miami has dropped seven of its past nine games against Power-5 opponents and are just 5-7 overall in their last 12 games.

It’s UM’s first regular season loss at home since Oct. 15, 2016, ending the Hurricanes’ 13-game run and the Canes first defeat against the Blue Devils on their home-field since 1976.

“It hurts, especially for the seniors,” Perry said. “We wanted to do it big. Now we’re fighting to the end. We’ve got to play with pride.”

After falling behind early, the Hurricanes battled back, scoring on back-to-back possessions.

Running back DeeJay Dallas skipped across the puddled-filled grass for an 83-yard touchdown, marking the sixth-longest run in program history. Dallas totaled 124 rushing yards, exceeding the century mark for the third time in his career.

Fellow tailback Travis Homer skidded and eluded the Blue Devils’ defense for a 6-yard rushing score to put the Hurricanes up 12-7, giving Miami its first advantage since Oct. 6 against Florida State. UM went 142 minutes and 32 seconds without a lead.

But the lead wouldn’t last forever.

The Blue Devils capitalized off of the Hurricanes’ second-half miscues.

Dallas coughed up the football leading to a Colin Wareham 27-yard chip shot with 9:32 remaining in the third quarter. Then, on Miami’s next possession, Bubba Baxa’s 42-yard field goal attempt was blocked, resulting in the Blue Devils regaining the lead.

Duke drove 65 yards down the field on nine plays, capped off by a 2-yard touchdown pass from backup quarterback Quentin Harris to Daniel Helm, putting the Blue Devils up 20-12.

Rosier, who played 10 drives, completed 8 of 12 attempts for 76 yards while Perry completed 5 of 16 passes for 35 yards, playing six drives, including the final four possessions.

“You’d love to have one quarterback who’s playing his tail off and there’s no question who the guy is,” Richt said. “I think it would be in our best interest if one guy steps up and balls out and plays great ball. We’re still trying to find that answer.”

Duke’s Daniel Jones completed 17-of-35 passes for 130 yards and one interception. Jackson rushed for 113 yards and one touchdown on 14 attempts.

“The guys, they’re just thinking about winning,” said safety Jaquan Johnson, who had Miami’s lone takeaway with an interception in the fourth quarter. “We have to find a way to win. That’s the attitude in the locker room.”