Home » “Today, we are all citizens of Pittsburgh.”

“Today, we are all citizens of Pittsburgh.” 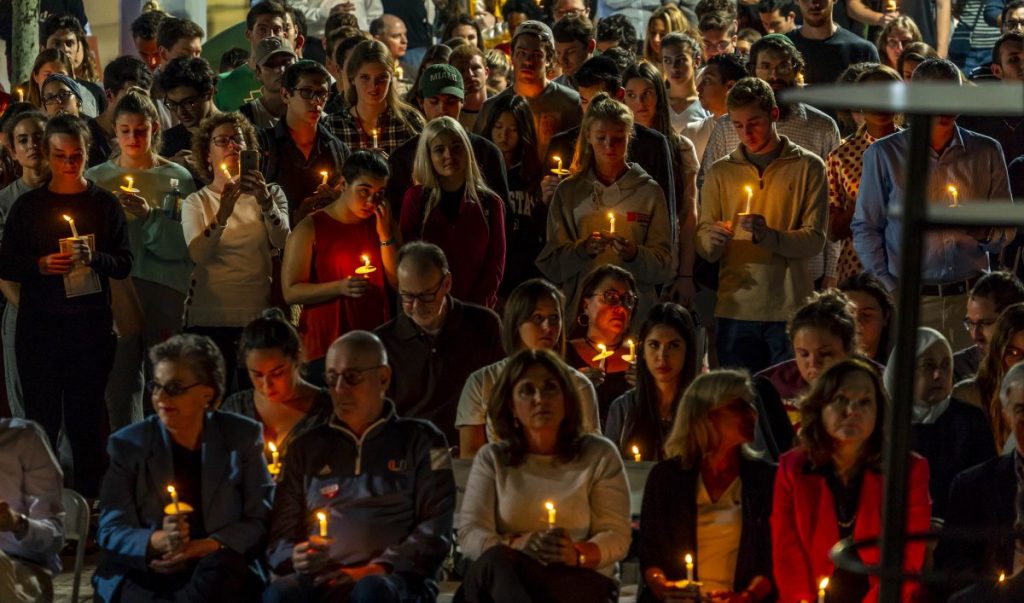 Hundreds of students showed up at the University of Miami's Rock Monday night for a vigil that remembers the victims of the Pittsburgh shooting at the Tree of Life Synagogue that occurred on Oct. 27. Photo credit: Hunter Crenian

“Pittsburgh, Pennsylvania is a city where my great grandparents sought refuge after World War One, and where my grandmother was born in 1926—may she be loved, and live a long life,” she said. “It’s a city which brought hope, and gave life to five new generations of proud Jews. It’s a city where Jewish life has thrived for well over a hundred years. It’s truly a city of peace, prosperity and genuine neighborly care. It’s a city where the light shines bright.”

However, on Monday night, Fellig noted that the light had been dimmed, following the death of 11 “beautiful, pure souls” at Pittsburgh’s Tree of Life Synagogue just two days prior.

During a University of Miami Hillel and UChabad-hosted vigil for those victims, Fellig said “we are all citizens of Pittsburgh,” and urged the community to help make the light shine again.

An estimated 300 people, including students and faith leaders, attended the vigil at the Rock, according to Vice President for Student Affairs Pat Whitely.

Attendees were invited to light candles and sign messages of support. They hugged and cried, too, leaning on each other as they listened to speeches, prayers and songs. 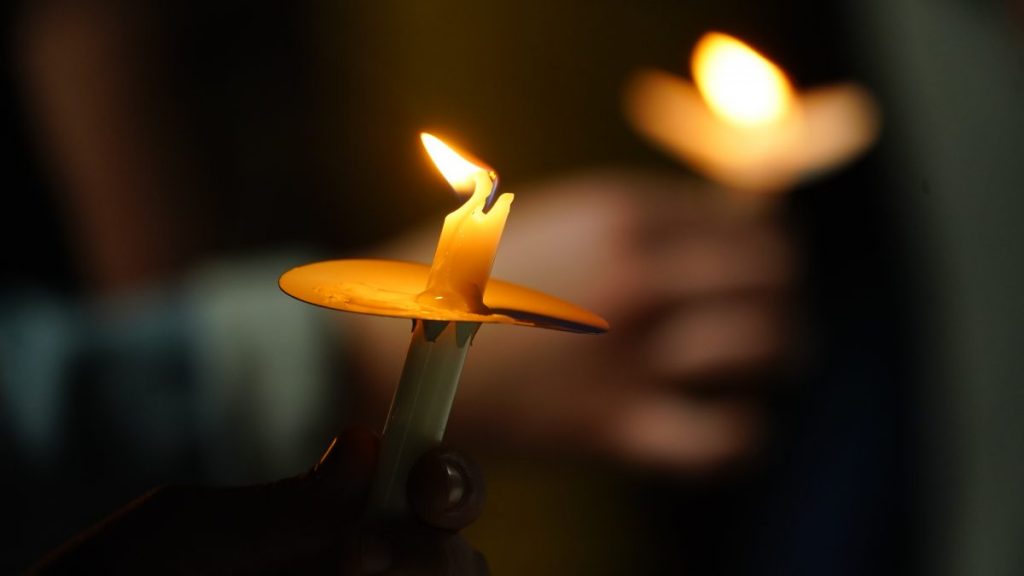 Hundreds of candles were lit at the vigil in honor of the 11 victims that were killed in the Pittsburgh shooting. Photo credit: Hunter Crenian

“I wear my star of David over almost every one of my shirts, and today with no less pride than the days before,” said Hillel President Brandon Jackson in his opening address.

“I forever stand a proud and empowered Jew,” said fellow Hillel President Casey Dresbach. “I know it’s overwhelming, and exhausting, and it may seem like it’s out of Coral Gables’ territory—but it’s not. Speaking up and making your voice heard is the most powerful tool we have.”

“We have not the ability to comprehend the deep mystery of your ways, oh God, so tonight we stand together. We cry together. We mourn together. Reflect together. And remember, together,” he said.

Rothman later recited a Hebrew prayer, El Maley Rachamim, for the victims. He had helmed a multifaith retreat on campus less than two weeks before the shooting.

“We had a tragedy,” he said after the vigil. “We can’t let the tragedy stop us. We have to continue building a community, building a world, grounded in love. There’s a phrase from the Psalms that says ‘olam chesed yibaneh,’ the world will be built on chesed, on love. And it’s our responsibility to actually do that—take the lessons of the retreat, and make them actionable today in light of the tragedy in Pittsburgh.”

Such action, he said, could include “the small things,” such as holding doors and making others smile, as well as the big ones, like voting on Election Day.

Student Government President Evan De Joya urged students to “be there for one another” in the face of violence.

Raphael Cohen, President of UChabad, spoke of his own family’s history with hate. His grandparents moved from Tunisia to France in the late 1960s; 40 years later, anti-Semitism prompted Cohen’s own parents to leave that country, too.

“We’ve seen anti-Semitism already on campus three times this year,” he said. “How long is it going to take for the swastika drawn in the dorms to turn to a target symbol on your front door?” 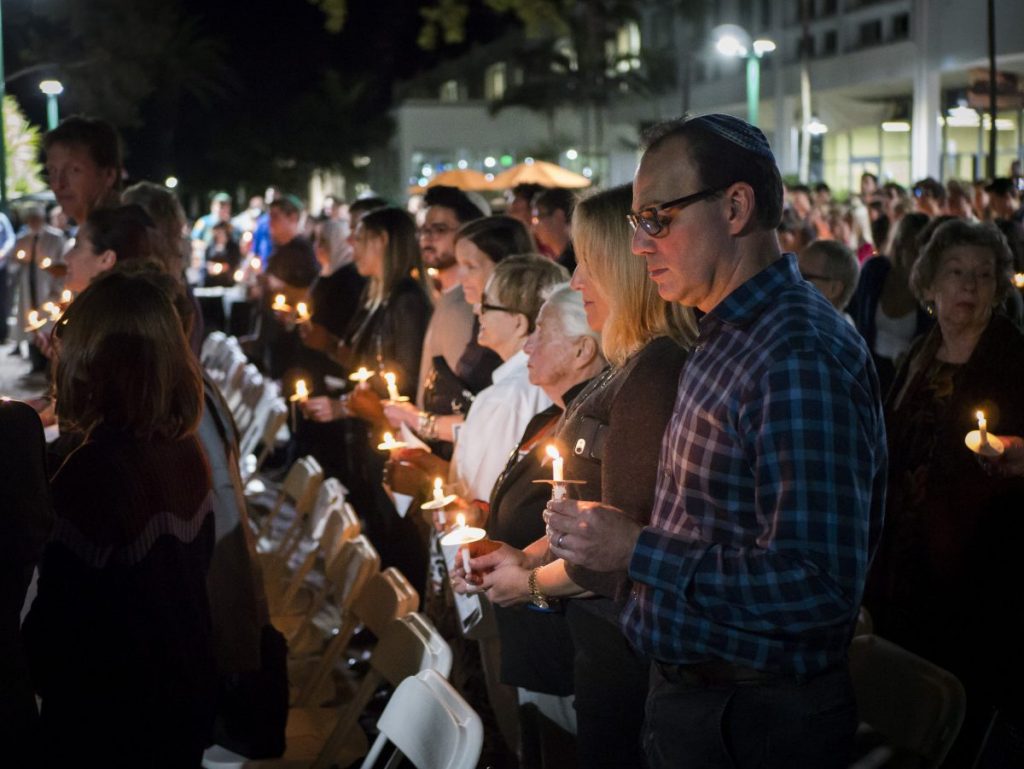 “Sadly, we have not been immune from incidents of anti-Semitism and a recent racist video,” she said. “In memory and for the honor of those who perished last Shabbat, and for the millions of Jews before them, we are duty-bound to fight hate wherever it may reveal itself, even when it’s in our midst on our campus.”

Though President Frenk and first lady Felicia Knaul were traveling and could not attend the vigil, they, too, shared messages of support.

“I myself am the child of a Holocaust survivor,” said Knaul in a letter read by Executive Director of Hillel Igor Khokhlov.

She went on to write that “in the hope of being of some support I will host a U-wide conversation in the coming weeks to listen to our students.”

Khokhlov himself called his students to action, too.

“You may ask,” he said, “‘what can I do as a Jewish student here at the University of Miami?’ Well, you have a voice. Don’t take it for granted. Cherish it, and act upon it.” 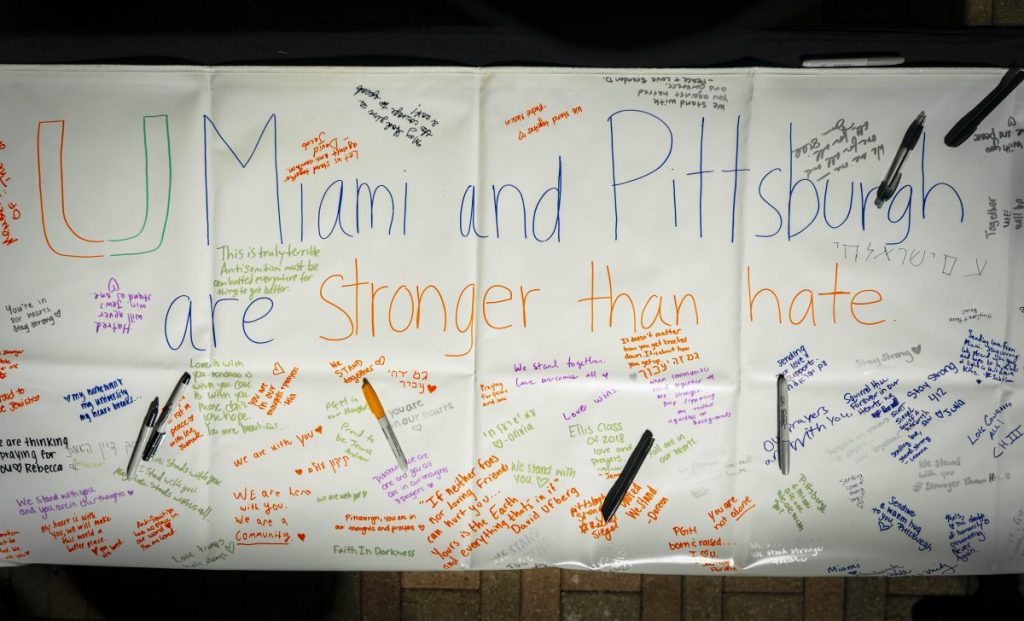 A poster titled "U Miami and Pittsburgh are stronger than hate" laid out on a table during the vigil at The Rock Monday night for students and the Miami community to sign. Photo credit: Hunter Crenian

Former UM President and current congressional candidate Donna Shalala attended, too. Though she did not give a speech, she said she wanted to be there for the students.

“The issue of hatred and the kind of tone that’s being set in this country is horrible,” she told The Hurricane following the vigil, “so all of us that are leaders have to step forward and say ‘enough is enough.’”

One attendee, David Sneider, had a personal connection to Pittsburgh.

“I mean, it’s just hard to process,” Sneider said. “I don’t really know how to put it into words. I have family that live really close to the Tree of Life; they live in Squirrel Hill. I’m just happy that they’re okay; it could’ve been so close. I don’t know, it’s just—it’s scary.”

Sneider said he “especially loved that there were different religious leaders from different faiths” at the vigil.

Imam Abdul Samra, Father Frank Corbishley, Father Philip Tran and Reverend Katie Lineberger each spoke on stage; Corbishley said that “silence is not an option” in the face of hate. 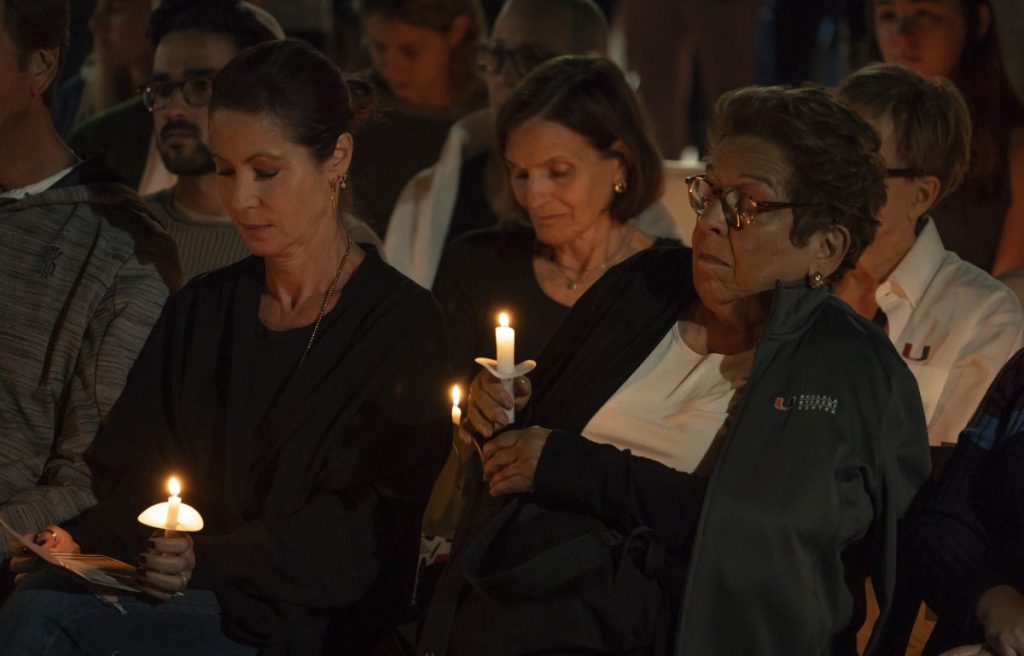 Earlier this semester, they were among the university chaplains who signed a letter titled “Hate not welcomed here” in response to a swastika drawn in a residential college.

“The messages of hope and encouragement this evening hopefully will inspire many to keep that hope continuing after this period of grieving,” said sophomore Jason Charos.

Sneider and Charos, both majors in jazz trumpet performance, noted the musical side of the vigil, too.

Fellow Frost student Gabby Rosenbloom sang a rendition of Psalm 150, set to the tune of Leonard Cohen’s “Hallelujah.” The crowd joined her in the chorus.

“I hope it brings you a glimmer of hope that we will survive this,” Rosenbloom said.

That idea of survival—of moving beyond mourning—was a recurrent theme throughout.

“It’s like turning on a light in a dark room,” Rabbi Henchi Fellig said of first-step responses to tragedy, including vigils like this one. “It’s so bright, the eyes have a difficult time adjusting, and then everybody’s together, and we’re all one, and we all pledge our support to each other and it’s great, and it’s important and we all feel it—but then, you know, our eyes get used to it, and life kind of goes on and suddenly the light isn’t so bright.”

To “destroy the darkness,” Fellig said we must carry out a second step: actual acts of goodness and kindness.

Rothman agreed in his closing remarks.

And even if you’re not Jewish, Rothman said, “may our doors be wide enough to receive you.”

Meet the candidates
Vote no on Amendment 3