Freshmen shine in exhibition contest in first game under DiMare 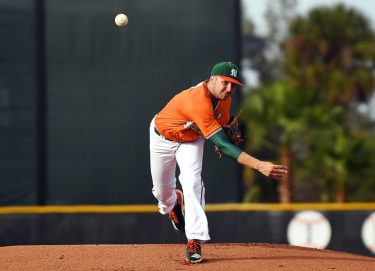 Right-hander Chris McMahon delivers home during his freshman season. McMahon battled injuries during his rookie campaign, but is expected to play a pivotal role in the Hurricanes’ starting rotation. Photo credit: Josh White

Miami Hurricanes fans got a taste of what’s in store for the 2019 Canes baseball season.

Both sides brought five batters to the plate every half inning, even if three outs were already recorded.

In his first collegiate game at Mark Light Field, freshman two-way player J.P. Gates sparked the offense. With the bases loaded in the sixth inning, Gates slammed a bases-clearing double into right field, giving Miami a 4-2 lead over Florida Atlantic.

“I was just trying to get around second base,” Gates said. “When I hit it, I knew I had to book it out of the box. I didn’t know that we were going to get the third run in. I just wanted to get the ball in play and get the runs across.”

Just an inning later, Miami changed its lineup giving freshmen Anthony Vilar and Adrian Del Castillo the opportunity to show off their bats.

Vilar sent an RBI triple down the line to extend the Hurricanes’ lead, scoring fellow rookie Chet Moore. Then, the next batter, Del Castillo laced a ball past the infield to put Miami up 6-2.

“However, I can contribute to win any game is good,” Del Castillo said. “We all want to win. We all have that goal of Omaha.”

Freshman Cal Conley scored from third on a failed pickoff attempt to first base. Rookie Michael Montes advanced two bases on the play before veteran Kam Lane brought Montes home with a double off the left field fence to give Miami an 8-2 advantage.

Miami scored for the fifth-consecutive inning when sophomore slugger Gabe Rivera scorched a solo blast to left-center and into the neighboring Cobb Stadium for the Canes’ first home run of the game.

The Hurricanes added to their offensive outburst with three runs in the bottom of the 12th, including a two-run longball by Montes.

While the freshmen came alive with the bats, the youngsters shined on the mound as well.

Right-hander Slade Cecconi racked up six strikeouts and allowed just one run in three innings. Transitioning onto the mound, Gates struck out six batters and only surrendered an unearned run across the final three innings.

“With Gino it’s always game time,” Gates said. “You have to get ready to pitch and be a dog on the mound. With him, you have to be a dog throughout the entire game.”

The duo of Cecconi and Gates relieved right-handers Chris McMahon and Greg Veliz, who pitched the first six innings.

“I learned a lot,” Gates said. “It’s the first time I played here. This was definitely an experience I’m going to relish in the future.”

McMahon started his outing strong, tallying five strikeouts through the first two frames. But then, FAU’s Andru Summerall spoiled McMahon’s outing, crushing a 1-1 fastball into the palm trees in right field for a two-run homer to give the Owls a 2-0 lead.

In the bottom of the fifth, Miami cut the deficit in half after the Sumerrall home run. Redshirt sophomore Michael Amditis plated infielder Willy Escala after reaching base on a fielder’s choice.

Veliz followed with three shutout innings and gave up just two hits and two walks, while striking out a pair.

“This is our first game together and we looked pretty good,” Del Castillo said. “We aren’t even close where we need to be, so I think we are going to be pretty strong.”

The Hurricanes will open their season against the Rutgers Scarlet Knights 7 p.m. Feb. 15, 2019 at Alex Rodriguez Park at Mark Light Field.