The Hurricanes faced the North Carolina State Wolfpack Oct. 18 and the Pack took no time to trigger their offense. In the second minute, Kia Rankin shook off her defender and placed a shot that deflected off a Hurricane for the first and only goal of the match. UM fell 1-0.

After losing to the Wolfpack, Miami headed to Chapel Hill to compete against No. 3 North Carolina. The Hurricanes surrendered a goal in each half and lost 2-0 despite a historic day for goalkeeper Phallon Tullis-Joyce.

The redshirt senior set a school record with 17 saves in a single-match. North Carolina notched 19 shots on goal, while the Miami didn’t register a shot on goal.

Miami was able to break even in Atlanta facing off against four teams.

On Friday, Oct. 19, the Hurricanes defeated The Savannah College of Art and Design Bees, 176-44. Miami followed the victory with a narrow win over the Florida Gulf Coast University Eagles, 121-119..

However, the UM lost both matchups the following day against Georgia Tech and Notre Dame. The Yellow Jackets stung the Hurricanes, 165-93, and Irish crushed Canes, 200-59.

Freshman Zorry Mason continued her note-worthy rookie campaign with a 57.33 first-place finish in the 100 IM.

Miami will head back to Coral Gables for a three-way meet between Boston College and Florida Atlantic University Nov. 2-3 at the Norman Whitten Pool.

The Hurricanes solidified three slots in the main draw quarterfinals at the ITA Southeast Regional Championship in Athens, Georgia.

No. 41 Adria Soriano Barrera also secured a spot in the quarterfinals with his commanding 6-2, 6-2 win over Florida Atlantic’s Jason Legall.

With their performances, Jankulovski, Soriano and Bastias have earned spots in the Oracle ITA National Fall Championships from Nov. 7-11 in Surprise, Arizona.

Miami got one singles victory at the ITA Southeast Regional Championships in Atlanta.

Yuna Ito picked up the lone win with a 6-4, 6-4 victory over University of North Florida’s Lucia Montaño.

The Hurricanes will travel to Alabama to take part in the Auburn Fall Invite Oct. 26-28 at Yarbrough Tennis Center. 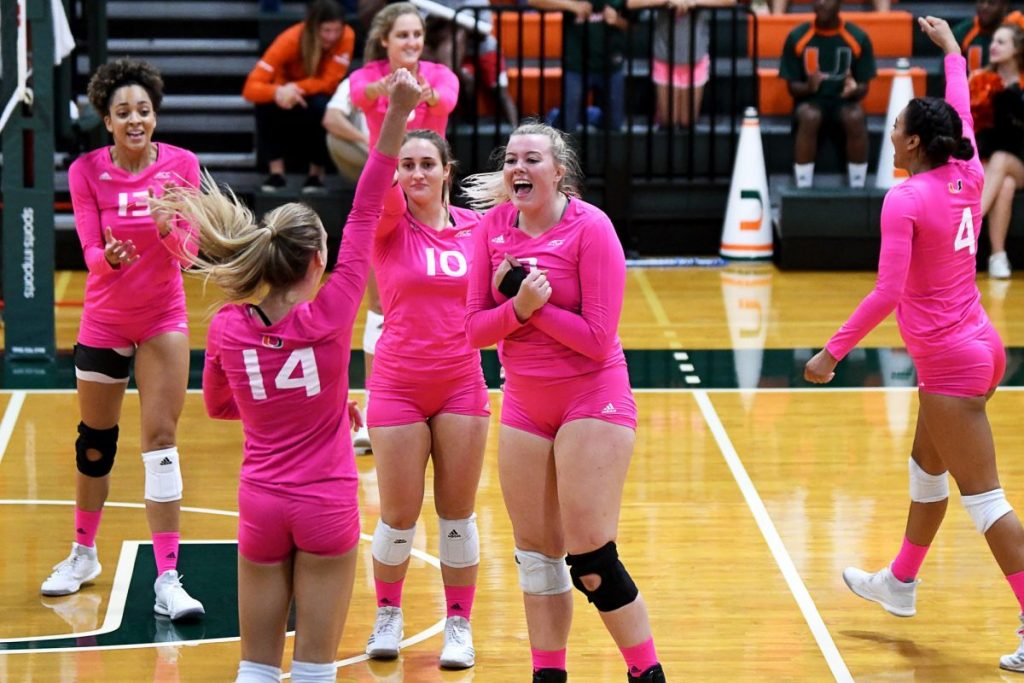 The Hurricanes failed to keep their perfect home Atlantic Coast Conference record intact this past weekend.

Kolby Bird led Miami, tying a season-high with 17 kills and two blocks against the Tigers.

Despite the loss, the Hurricanes bounced back Sunday, Oct. 21 with a 3-1 victory against the Georgia Tech Yellow Jackets.

UM will continue its four-match homestand against the Florida State Seminoles 6:30 p.m. Oct. 24 at the James L. Knight Sports Complex.