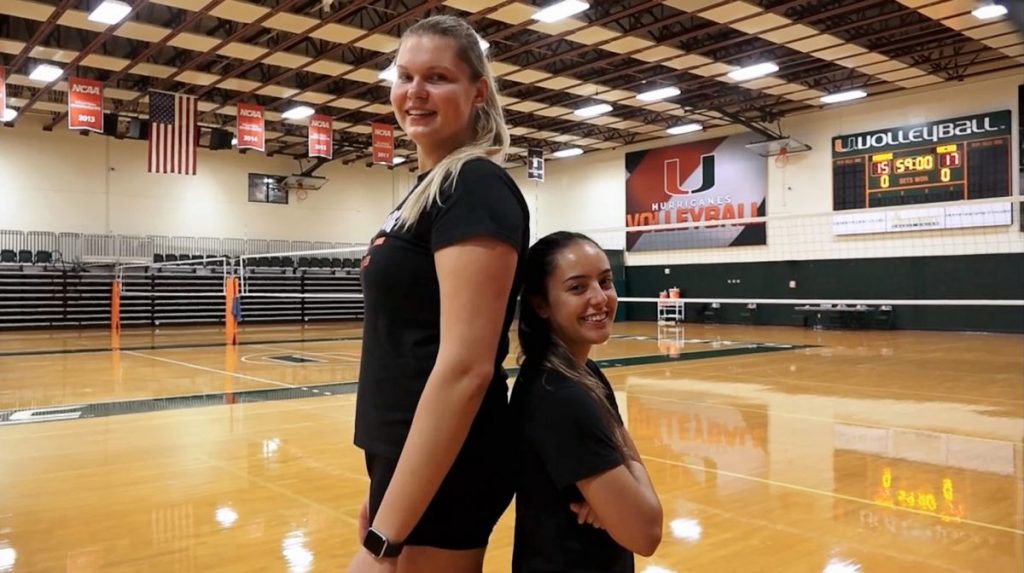 On the University of Miami volleyball court, redshirt sophomore Elizaveta Lukianova and junior Sara Duque complement each other.

They play different positions – Lukianova is an outside hitter and Duque is a defensive specialist – but they both put their unique fingerprints on every match.

“You can find both of them in our office watching film and watching other matches from around the country,” associate head coach Kasey Crider said. “They’re into the sport like few others are.”

But what makes this connection especially eye-catching is that these two players are the shortest and tallest athletes on the team. Lukianova stands 6-foot-6, while Duque is 5-foot-2.

“People aren’t used to seeing tall people and short people together like that, and when they do, I wouldn’t say it’s awkward but it definitely grabs their attention,” Lukianova said.

Both players have heard their fair share of doubters when it comes to their height in volleyball. Some have considered Lukianova too tall and Duque too short, but they have proven otherwise, both playing integral parts in the Hurricanes’ success.

“We can always rely on each other – we have each other’s backs on the court,” Lukianova said.

And the impact they have on people off the court matters just as much. When the two go places together, they draw plenty of attention because of their difference in size, but this doesn’t bother them. They see it as an opportunity to motivate others, especially the youth.

“I think it shows any height can play the sport,” Duque said. “I have a lot of little girls come up to me and say, ‘you play even though you’re so short!’ It’s really cool to see the different reactions we get from that.”

Lukianova and Duque’s differences stem further from just their height – they couldn’t be from more different places.

Lukianova is from Omsk, Russia, where she lived the majority of her life until college, while Duque is more of a local coming from Plantation, Florida.

They got to UM at the same time in 2016, but during their first year, Lukianova lived on her own. Duque said she rarely ever heard Lukianova speak and barely even knew what she sounded like.

But starting in their second year, they would go on to be roommates and become close friends. The two said that coming from immensely different backgrounds has actually grown their relationship as they try to learn each other’s culture.

Lukianova spoke very little English her first year at Miami, but Duque has helped her adjust and become more comfortable with the language. They have enjoyed the process, even when it comes with a few jokes once in a while.

“Yeah, she definitely asks a lot of questions,” Duque said with a laugh.

“Sometimes they are stupid, but I just don’t know!” Lukianova said with a smile regarding the questions. “I need to know and figure them out.”

They will continue to squash stereotypes while inspiring others with every single match.

15 cheap, easy ways to be kind to yourself
UMindfulness reminds students to relax during midterms season