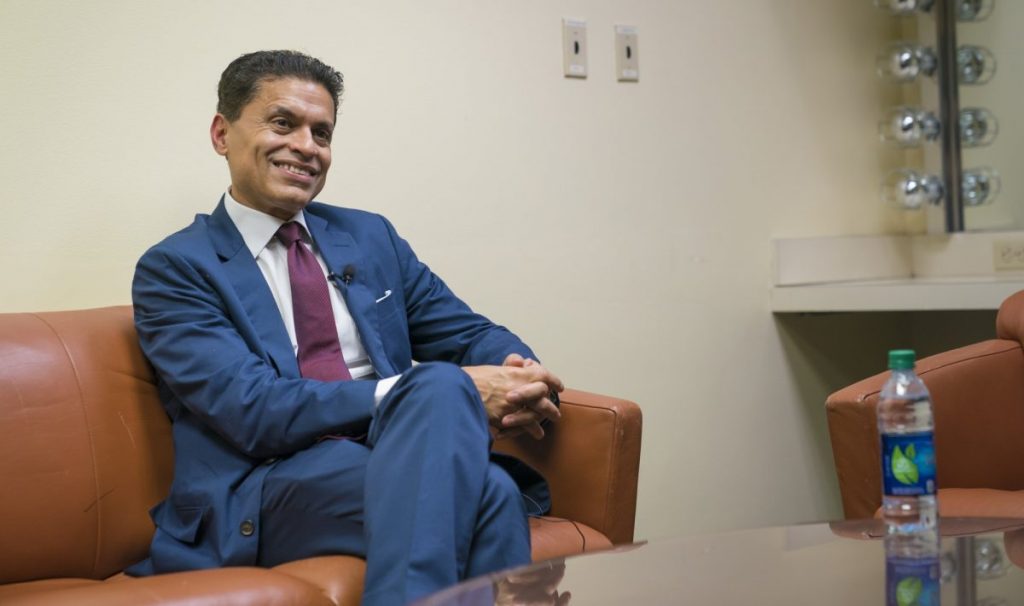 Acclaimed journalist and author, Fareed Zakaria, speaks to the student media ahead of his speech at the 2018 Student Convocation and the Northern Trust lecture series at the Watsco Center Monday night. Zakaria is also know for his show on CNN Worldwide titled "Fareed Zakaria GPS", as well as a weekly column he writes for the Washington Post. Photo credit: Hunter Crenian

In his speech, “Is the American Dream Out of Reach,” Zakaria challenged students to think critically about the problems affecting today’s society. He spoke about America’s role in the world and how the American dream has evolved over the past few decades as a result.

“One thing I that I was impressed by was the boundless sense of optimism,” Zakaria said. “Today, that boundless optimism is not as commonly seen.”

Isaac Attuah, an international student from Ghana, said he listened to the speech in hopes of gaining a better understanding of his own American dream.

“We all came here with a goal, and we just want to see whether the goal is possible,” said Attuah, a freshman computer science major. “People from my home see America as a heaven. Basically, when you come here all your problems will be solved, but you’re also entering a bundle of new problems.”

In an exclusive interview with student media, Zakaria explained the importance of getting out of the American bubble and learning from other nations. He said that although America is influential, it’s not the only world power that matters.

“One of the great challenges of American education should be to force Americans to get out of their comfort zone and to really understand what’s going on in the rest of the world,” Zakaria said. “There’s intellectual advantage to doing it, but there’s also huge business advantages now.”

Zakaria said Americans should strive to become multilingual global citizens, who learn from other nations instead of disregarding them. He said the great problem with America is not that its residents speak too many languages, but that they don’t speak enough.

“We tend to think that the rest of the world could learn from us, but we can also learn from them,” Zakaria said.

Rachel Daniel said she wanted to hear Zakaria speak because she wanted to understand how she could personally become more involved in the global community.

“Right now, we’re in a contentious time in terms of agreements and global cooperation,” said Daniel, a political science, Latin American studies and economics triple major. “I just wanted to learn about his vision for the future and how as students, we can play a role as global citizens and make sure the future is better than the world is now.”

Zakaria’s CNN show debuted in 2008, and has featured distinguished guests such as Barack Obama, Hillary Clinton and Vladimir Putin. The show earned the Peabody Award in 2011 and an Emmy Award nomination in 2013.

Zakaria has also worked as an editor of Newsweek International, managing editor of Foreign Affairs, a columnist for Time, an analyst for ABC News, and the host of Foreign Exchange with Fareed Zakaria on PBS. He’s written three New York Times bestselling books: “In Defense of a Liberal Education,” “The Post-American World” and “The Future of Freedom.”

Zakaria received an honorary doctorate of humane letters from UM in 2007, and previously addressed the UM community at the 2010 New Student Convocation.

Natalia Rovira and Benjamin Estrada contributed to this reporting.

A letter to South Florida: Changes need to be made, but remain calm
Congresswoman Ros-Lehtinen named Distinguished Presidential Fellow at UM