Crowds of people gathered outside of the box office in anticipation of an aesthetically stimulating night. Upon entering the concert hall, it became apparent that this performance was more than just a piano concert.

While at its core a faculty recital featuring highly esteemed faculty artists and students, the performance added another element of artistry when guest pianist Anastasiya Naplekova took to the stage with her former professor, Dr. Tian Ying, to partake in eloquent renditions of some of the world’s most famous two-piano masterpieces.

Starting together with a single breath, Naplekova and Ying were two voices melded into one, both playing technique and dramatic flair. Embodying the intricacies of each separate movement of Mozart’s Sonata in D major for two pianos, the pianists wowed the suddenly still crowd with their technical and theatrical prowess. 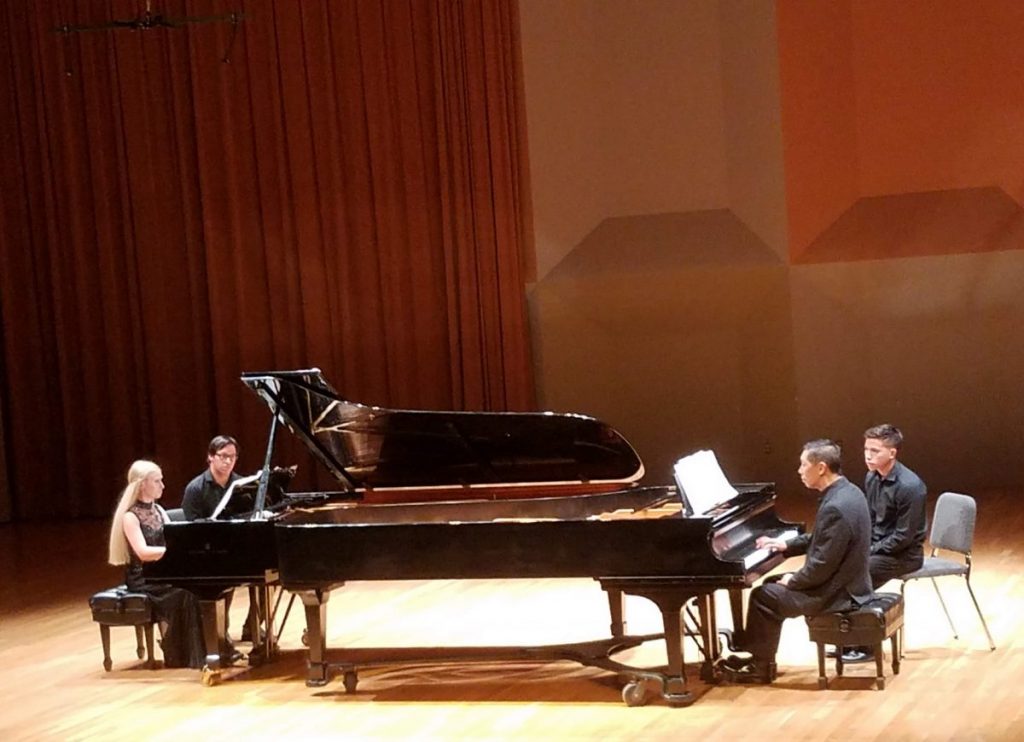 While Mozart is known for technically challenging masterpieces, Naplekova explained after the performance, each graceful and timed touch of the keys proved that this virtuoso pianist had a reputation of not only embracing challenges, but also exceeding expectations.

Introduced by Frost professor Santiago Rodriguez as “illustrious village-taught Anastasiya”, Frost alumna and doctoral recipient Naplekova quickly became the pianist to watch. The talented and passionate musician has been a soloist with multiple orchestras as well as the recipient of international awards in Ukraine, Poland and Morocco, and has recently earned her degree in piano performance and pedagogy from the University of Miami Frost School of Music.

When asked how her experience at UM shaped her career, words such as “wonderful atmosphere” and “excellent education” came to Naplekova’s mind as she reflected on her time at UM with Dr. Rodriguez. Her mentorship with Rodriguez was one of the main reasons Naplekova decided to come to UM to cultivate her passion for piano, and it became one of the hallmarks of her artistic past.

As the night progressed through Schubert and onto Rachmaninoff, Naplekova’s specialty, the players showed no sign of fatigue as they climbed to greater and greater heights of technical wizardry – all while maintaining a captivating stage presence.

Erin Engel, a 10th-grader at Riviera Preparatory and a prospective Frost student, had never been to a Frost show before tonight, but left wanting more.

“She was incredible, it was a treat to watch [them] perform,” Engel said.

Pride for the Frost program was clearly not in short order that evening.

Just as the pair approached the last few triumphant chords of Rachmaninoff’s Suite for 2, the audience prepared to shower the pianists with thunderous applause and bouquets of roses. Given a standing ovation for about five minutes after their final bows and exit from the stage, Ying and Naplekova blissfully returned to the stage for an encore. The pair once more showcased their individual personalities while serving as messengers for the dramatic and enveloping themes of the masterpieces they brought to life with their playful licks which culminated in sophisticated phrases.