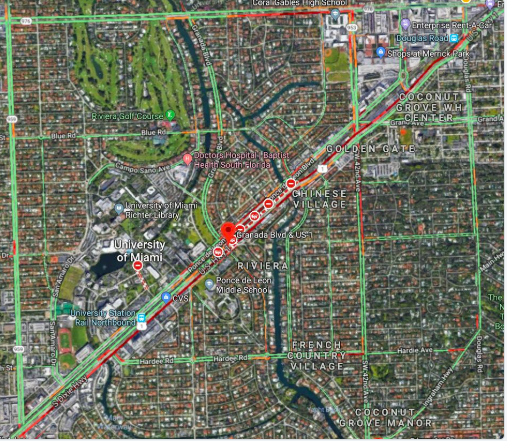 A Miami-Dade police officer attempted to pull over a Honda Element, which was traveling northbound near the intersection of Grenada Boulevard and U.S. 1, police said.

When the officer tried to stop the vehicle, the 16-year-old driver immediately accelerated at a high speed and lost control of the car, police said. The car struck a tree in the median and swerved into the southbound lanes.

The crash backed up northbound traffic on U.S. 1 beyond Red Road, and backed up southbound traffic past Bird Road, according to a tweet from the University of Miami’s Emergency Notification Network.

“I was trying to drive to school and realized traffic was backed up for miles,” said Hailey Burke, a senior sport administration major. “Roads were shut down, cops were directing traffic around the scene down Ponce. It caused me to take so many detours to get to class and resulted in me being late for class.”

The driver and 15-year-old back-seat passenger were ejected from the vehicle and transported to the hospital in critical condition, Miami-Dade Police said. The other passenger was transported in stable condition.

The police officer was responding to a 911 call in the area of SW 83rd Court & SW 78th Street. The caller reported that two individuals were attempting to open vehicle doors, according to police.

A gun was also found at the scene. Police received reports of a stolen vehicle later in the morning, and their investigation confirmed that the missing vehicle was the one involved in the accident.

Tommy Fletcher contributed to this report.

UM reacts to No. 53 ranking
Discover (or remember) who you are in college