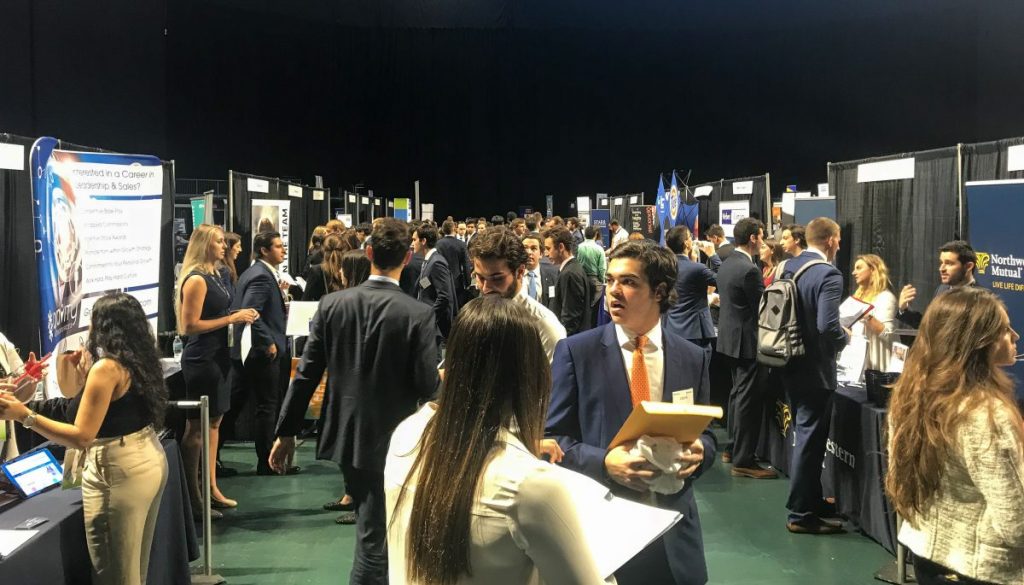 University of Miami students filed into the Watsco Center with their blazers buttoned and their resumes in hand. Representatives from more than 150 organizations were waiting inside, hoping to meet their next interns, employees and graduate students.

Everyone was there Oct. 3 for the Toppel Career Center’s signature recruiting event: the Fall Career Expo and Graduate Fair. More than 1,000 students registered to attend.

Sophomore economics major Andrea Lopez said this was her first experience at a career fair, resulting in a strange mixture of nervousness and excitement.

“It’s a new thing,” she said. “It doesn’t happen every day. Maybe there’s an opportunity behind it.”

Lopez said she attended the expo to practice dressing professionally and to network with people in her desired career field. Despite her initial nerves, Lopez said she was able to talk to employers about internships, job opportunities and their company philosophies.

“The more people you know and the more connections you have, the more opportunities you can get in the future,” Lopez said.

Networking was a common theme of the event, with many students at the Career Expo listing it as their top priority.

Junior Marianna Spentzos said although she was nervous to approach potential employers, she wanted to step out of her comfort zone and form meaningful connections.

“It’s something you have to learn by doing when you talk to people,” said Lopez, a financing and marketing double major. “You’re not just going to suddenly get good at networking while you’re sitting alone in your room. You have to push yourself to go out and interact with employers.”

Spentzos said she was hoping to talk to employers from multiple companies and industries because she thinks it’s important to connect with people who can offer a variety of opportunities.

Luckily for Spentzos, there was a range of industry representation at the Career Expo. Attendees included organizations specializing in business, healthcare, communication, government, science, nonprofit and technology.

Some of the most well-known companies were Ernst & Young, Magic Leap, Procter & Gamble, Nielsen, Maximus, Enterprise and Aldi.

Representatives from 14 graduate programs also registered for the event, including prestigious institutions such as the Duke University Pratt School of Engineering and the Boston University School of Medicine.

Jenna Baxter, a district manager for Aldi, said she comes to UM because there are plenty of opportunities for students to get involved on-campus and to show leadership skills. These are the top traits that she looks for in a potential hire, Baxter said.

“UM is definitely one of the best universities in the state,” said Baxter. “We’re looking for some top candidates, and we’ve had a few come through.”

Baxter said she had a good overall experience at the Career Expo, and that she keeps coming back to UM because Aldi has hired some really talented ‘Canes in the past.

“It’s been great,” she said. “It’s very well organized, the staff is friendly and helpful and the students are very well prepared.”

Carley said she looks for students who walk up to her table with confidence, but graduate student Troy Hoecker said he knows that charisma doesn’t come easy.

Hoecker, who is studying to earn his master’s in finance, said that networking takes practice.

“There’s too much competition,” he said. “People cold applying never hear back, so you’ve got to establish a relationship first.”

Bujnowski said face-to-face meetings are much more effective than emails or phone calls, which is why she attended the Career Expo. She said she wanted to personally meet with representatives from the companies she applied to.

Hoecker also underscored the importance of face-to-face meetings. He said doing research beforehand and arriving with questions can get the ball rolling on useful conversations.

“You’ve got to take the first leap,” he said. “That’s always the hardest part, but once you start doing that, it becomes easy.”