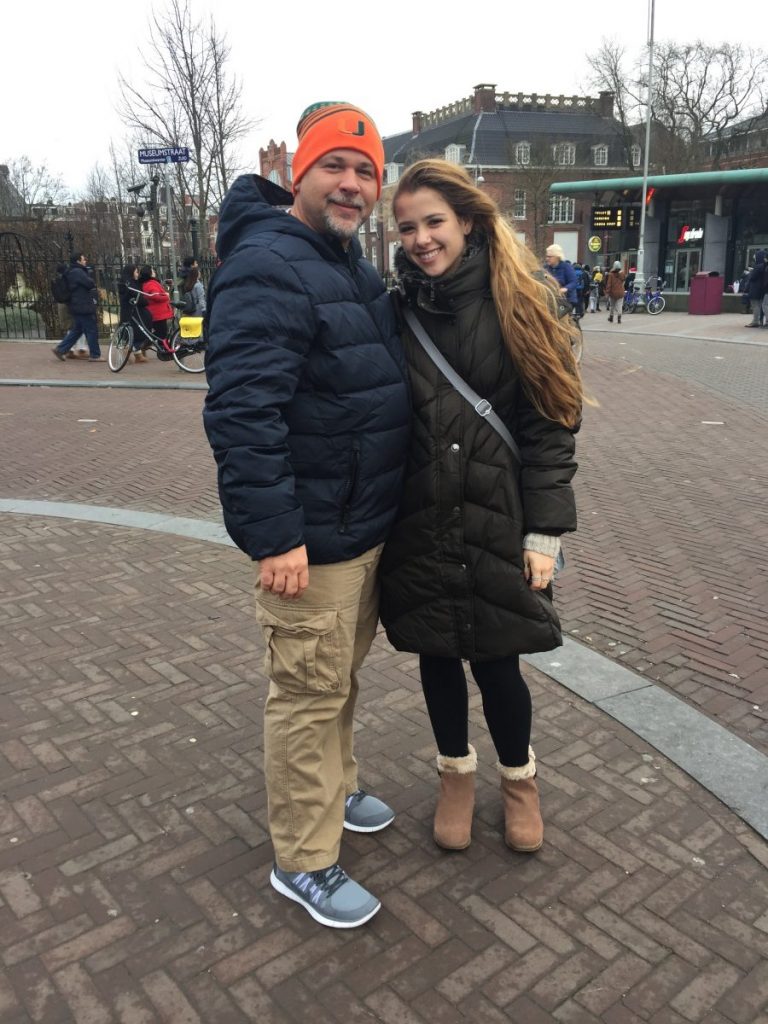 The author poses with her father, Hamlet Diaz, who "sounds like the Cuban Tucker Carlson, minus the arrogant smirk." Photo courtesy Alexandra Diaz.

On the rare occasions that my dad and I talk politics, it becomes clear to me where he’s getting most of his political information. He sounds like the Cuban Tucker Carlson, minus the arrogant smirk.

My dad is a 44-year-old Cuban immigrant, a classic conservative, a “small government guy.” Although I’ve always understood that my parents are Republicans, they aren’t that politically involved nor are they the kind of people to bring up hot-button issues at family gatherings.

My father, especially, has always been a man of few words, joking that he “rarely loses the opportunity to stay quiet” (and advising me to do the same, although I rarely listen).

Given his personality and political profile, it’s been shocking for me to see him evolve into a slightly angrier version of his previous political self. He approaches current events with a newfound degree of hostility that I’m completely unfamiliar with.

Most recently, when discussing Colin Kaepernick and his appearance in the Nike commercial, my dad, smiling, told me he’d be boycotting Nike but that he wouldn’t burn the sneakers he already owned.

Although he made this known to me jokingly, the sentiment behind his comment was real. Five years ago, my father would have scoffed at the thought of boycotting anything for something so trivial.

What happened? How does a classic conservative gravitate toward the sometimes populist, radical messages that Fox News promulgates?

The problem with Fox News may not necessarily lie in the fact that it is a partisan news organization, but in the perception of its audience that they are receiving unbiased information.

Political commentary is inherently influenced by the political views of the commentator. Tucker Carlson, Bill O’Reilly, Sean Hannity, and Laura Ingraham present what they believe to be important news stories, and opine on them. This method is informative (or so we think) and undoubtedly entertaining.

This phenomenon occurs on both sides of the spectrum and leads to a kind of confirmation bias, where liberals watch liberal commentators, and conservatives watch conservative commentators, reinforcing what they already believed.

A 2014 survey conducted by the Pew Research Center concluded that Fox News viewers tend to be more ideological than those of CNN or MSNBC. 60 percent of Fox viewers describe themselves as conservative, 23 percent as moderate, and 10 percent as liberal.

Viewers of MSNBC—which is commonly criticized for having a strong left-winged bias—were 32 percent conservative, 23 percent moderate, and 36 percent liberal.

I can speculate that these percentages have changed since the last election cycle and that the viewerships of Fox, CNN and MSNBC have become increasingly polarized. Fox News Channel has been the most watched news channel in the country for more than 16 years. So, they’re doing something right. After all, they did sway my dad.

Fox’s success likely has a lot to do with how painfully entertaining it is. Although I could not disagree more with people like Sean Hannity, he’s an animated, almost caricaturesque man. He’s convincing and straightforward. In our increasingly progressive and liberal world, Fox News provides a safe haven, a bubble for those who refuse to catch up.

Many viewers—my father included—believe that Republican values are being assaulted. Gay people can get married now and universities are breeding grounds for communists. To Fox News commentators and viewers, it is more important than ever to make conservative voices heard.

This message resonates with people who feel disenfranchised and ignored by politicians, particularly by Democrats. My dad tuned into Fox for sound conservative commentary, stayed for the entertainment, and ultimately bought into right-wing (sometimes fringe) talking points.

Fox has become the loudest Republican voice, but pimping out your party for the sake of ratings is inherently damaging to its viewers. Flashy talking points or salacious stories shouldn’t always be the priority.

To be fair, this is a pitfall of Fox, MSNBC, CNN, and most other major news outlets. The media’s relative silence on Yemen’s civil war, for example, speaks volumes.

The United Nations’ humanitarian agency reported last month that 22 million people require assistance, 2 million are displaced and 8.4 million don’t know where their next meal will come from as a result of this conflict; while Tucker Carlson found it more relevant to mock women’s and gender studies as an academic discipline (which coincidentally happens to be one of my majors).

Since the 2016 presidential campaign, our politics have become increasingly nasty and partisan (although this is just an uptick in a trend that started years ago). Some conservatives and most Trump supporters feel rejected by news channels that are critical of the current administration (like CNN and MSNBC), so they turn to Fox News.

While other news organizations talk about the Mueller investigation, arguably to an excessive degree, Fox covers “reverse racism” and Hannity rants about America’s “soft coup” by the deep state… groundbreaking.

My father’s conservatism has been hijacked by the polarized political climate, and Fox News has been the primary tool used to drag him over to the dark world of conspiracy theories and silly boycotts.

Many of Fox’s issues are similar to those of the other news outlets: sensationalizing news stories and selective coverage. Trump supporters find comfort in people like Hannity and Carlson, who support the administration in spite of overwhelming evidence that our democratic institutions hang in the balance.

After all, it must be nice to ignore the fact that our president, who is under investigation for possible obstruction of justice, opts to call it a “witch hunt” instead.

Liberals and conservatives alike need to escape their media bubbles and come up for air—to find out what’s happening in the rest of the world—especially for those who have been watching Fox News for the past few years.

In the Trump era, Fox news has been a vehicle to continue dividing us, using its entertaining commentators to appease those who don’t want to keep listening to negative coverage of the administration. It’s dangerous for our democracy and bad for my sweet dad.