The Arlington, Virginia, native finished with a time of 18:32 in the 5K, notching the 10th fastest 5k time in Hurricanes history.

For the third straight meet, Dylan Sykes led the men’s side. The sophomore recorded a time of 25:39, dropping more than three minutes of his 8K time.

Junior Matthew Wifels and freshmen James Hasell and Sam Flesichman, each closed out the event with season-highs in the 8K.

“Ryley continues to impress me with her consistent performances no matter how she may be feeling,” distance coach Damon Griffiths told hurricanesports.com “Dylan has made gigantic progress in a year. He improved over two minutes and 70 positions. This shows his commitment to the process.”

Miami’s next competition will be at the USF Invitational Oct. 12 in Tampa, Florida.

The Hurricanes dropped a pair of Atlantic Coast Conference matches 2-0 against Duke and Virginia Tech at Cobb Stadium. 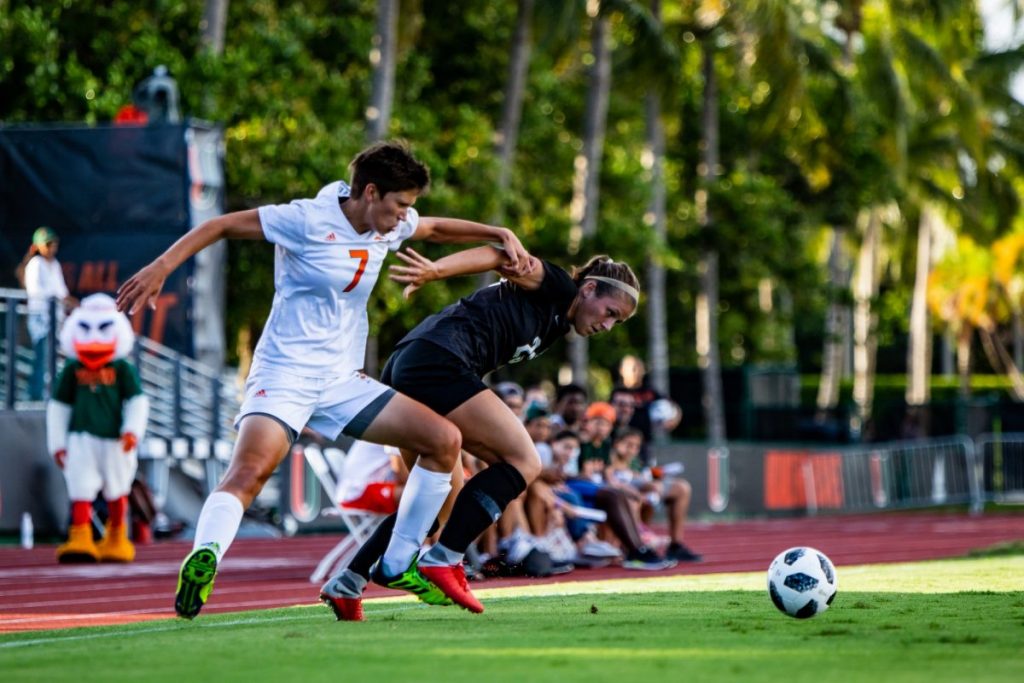 Against the Blue Devils on Thursday night, Miami held the 12th-ranked team in the country scoreless for the first 43 minutes of action, but a late first half goal put Duke up, 1-0.

“Obviously, we had a couple errors and they were excellent at capitalizing on them,” coach Sarah Barnes said. “Unfortunately, their first goal came off of us rushing a free kick with 90 seconds left in the half, which we were trying to stop and they got us in transition.”

In the 59th minute, the Blue Devils doubled their lead.

Duke’s Karlie Paschall boomed a ball over the top of Miami’s defense towards Taylor Racippi, who curled the ball into the right corner of the net.

“Bottom line is, in both boxes we just haven’t been good enough,” Barnes said. We have to capitalize when we have opportunities. And I thought that tonight we had as many [opportunities] as they did, we just have to be better at stopping theirs.”

On Sunday afternoon, against the Hokies, Virginia Tech stormed out to an early advantage.

Allyson Brown streaked towards the box and found the back of the net to put VT in front, 1-0.

Virginia Tech increase its lead seven minutes into the second half when Emmalee McCarter sent a cross near the far left post and Emily Gray headed it home to give the Hokies a 2-0 lead.

The Hurricanes will look to end their three-game losing skid and pick up their first conference victory when Miami hosts Syracuse 7 p.m. Sept. 29 at Cobb Stadium.

“Today, Estela proved that she has taken a giant step forward in terms of maturity,” coach Paige Yaroshuk-Tews told hurricanesports.com “Handlign the stage with such a high level

The No. 3-ranked Perez-Somarriba picked up five straight set victories to win the four-day, 32-player tournament.

Back in Coral Gables, Florida, the Hurricanes finished the Miami Fall Invite with a 13-7 record.

Yuna Ito and Ana Madcur were named co-champions of the B Main Draw. In the semifinals, Ito picked up a 6-3, 6-3 victory over Bella Lorenzini and Madcur registered a 6-3, 6-3 win against Lera Patiuk setting up the all-Miami final.

The pair of Lucia Marzal and Daniella Roldon lost, 4-6, to Florida’s Katie Kubicz and Marlee Zein in the B Main Draw third-place match.

UM will host its final home tournament of the fall slate Oct. 12-14 at the Neil Schiff Tennis Center in competition for the Bedford Cup.

Miami won back-to-back ACC matches against Wake Forest and Duke this past weekend at the James L. Knight Sports Complex.

Outside hitters Chloe Brown, Kolby Bird and Elizaveta Lukianova all finished with a team-high 10 kills.

“The ACC is always tough and we never take it for granted,” coach Jose “Keno” Gandara said. “We were ready to play especially after last weekend. We maintained a high level of competition tonight, but there are somethings we’ll have to clean up.”

Bird led the Canes offense with a season-high 17 kills and two service aces.

“The crowd was awesome today and it’s definitely fun to play in front of that,” the senior outside hitter said. “We feel the energy on the court and we thrive off it.”

Lukianova chipped in 15 kills and Brown notched another double-digit kill performance with 11.

Miami will look to stay undefeated in conference action when the Hurricanes travel to play Pittsburgh 7 p.m. Sept. 28 at the Fitzgerald Field House.