Despite continued tweaking of the vegan menu by the University of Miami’s dining staff and regular input from a student vegan group, the campus vegan menu remains “unappetizing and repetitive,” some die-hard student vegans said. 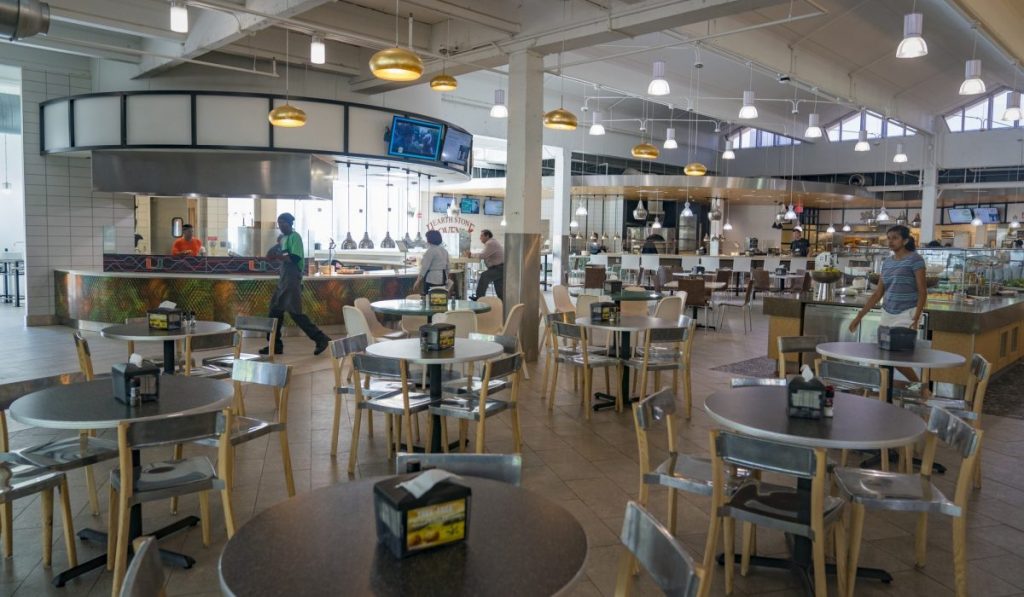 The Hecth-Stanford Dining Hall is located beside the freshman dorms as freshman are required to have a meal plan for their first year of college. Photo credit: Hunter Crenian

“They cannot think that doing tofu all the time is good enough,” said junior Daniela Gonzalez, who has been vegan for two years. She said she appreciates that the university offers vegan selections, but it’s repetitive.

Eliana Litos, a sophomore who’s been a vegan for a little over a year and a half, said she thinks the staff does a good job at selecting vegan foods.

“But the food itself doesn’t taste good,” Litos said. “They should cook it well and make it appetizing like they do to the non-vegan stuff.”

The menu, which changes daily and is accessible through UM’s Dine on Campus website, is reviewed weekly during the school year on how well recipes were received by students, Ross said.

Based on the response, the menu is modified accordingly in a process called “menu finesse,” Ross said.

Mahoney-Pearson Dining Hall sous chef Octavio Wilson said the dining hall asks that vegans offer ideas to improve vegan meals, such as taking away or adding items. Student input, Wilson and Ross said, is not only sought but encouraged.

“Miami is a very forward-thinking city, so we have always had a strong presence of vegan and vegetarian guests,” Ross said. “We need to keep the ideas fresh and focused on what our students want.”

Ross said he is unsure of the total number of vegans on campus, but 152 students are signed up for the weekly vegan and vegetarian mailing list. Additionally, Plant Based Canes, a vegan student group, formed in the fall of 2016 and gives feedback on the menu.

The group, which supports those pursuing a healthy lifestyle and wants to inspire others to change to a more plant-based diet, has about 15 members, including Litos.

In part because of the group, the dining hall has added items to the vegan menu, such as “plantiful bowls,” chia and flax seeds, pea protein-based milk, nutritional yeast and a variety of plant-based proteins.

An array of vegan options, which are free of all animal-based ingredients and byproducts, is available daily in both the Mahoney-Pearson and Hecht-Stanford dining halls for breakfast, lunch and dinner and are labeled “vegan” on the menu on the Dine On Campus website. Items such as vegan burgers, chickenless nuggets and vegan hot dogs are available upon request from The Grill.

The deli and salad bar also have vegan options that are labeled on the menu. In the Hecht-Stanford dining hall, The Canes Zone is a designated vegan and vegetarian station and is open to all students for lunch.

“We’ve got a great deal more to offer,” he said.

Vegan students point out other issues that concern them, including cross-contamination and mislabeling, said Litos, who has allergies.

Gonzalez said after complaints about using the same stoves and oil for preparing both regular and vegan meals, the dining hall brought in an air fryer for strictly vegan cooking last semester.

“We take cross-contamination very seriously and are always looking for ways to reduce the risk of it,” Ross said.