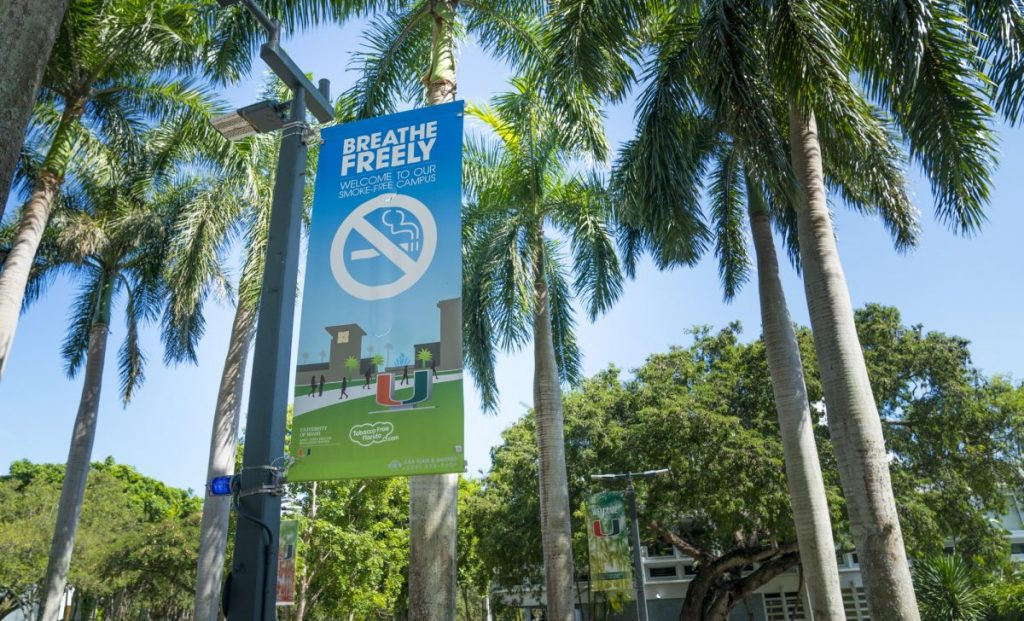 Banners around the University of Miami's Coral Gables campus promote the University's smoke-free campus policy. The fines for smoking on campus, including e-cigarettes, have increased. Photo credit: Hunter Crenian

In an effort to crack down on violators of the campus no-smoking policy, the University of Miami has more than tripled smoking fines from $75 to $250.

The stiffer penalties, the result of a decision by UM’s “Smoking Think Tank” team, went into effect at the beginning of the fall 2018 semester.

“We’re not trying to jump out and catch people, but we do have to enforce the policy,” said Dean of Students Ryan C. Holmes, who helped oversee the Think Tank.

Holmes, who is also associate vice president of student affairs, and Scott R. Levin, executive director of the Department of Wellness and Recreation, oversaw the official policy change. The team began meeting in January and implemented the decision to increase fines in August.

Randy Fitzgerald, a Student Government senator, was also a member of the team. He said he believes the policy changes were not only to reinforce the non-smoking campus policy but to promote a healthier lifestyle for students.

“Miami is a place that specializes in a healthy lifestyle,” Fitzgerald said. “We should always be enforcing that.”

The university phased in the smoke-free campus policy over a two-year period. In 2011, smoking was prohibited on the Coral Gables campus with the exception of 24 designated smoking areas. The next year, the number of designated smoking zones was reduced by 50 percent. In 2013, the campus banned smoking entirely.

According to the 2018-19 student handbook, “Smoking includes inhaling, exhaling, burning, or carrying any lighted cigarette or electronic cigarette, cigar, pipe or another such device which contains tobacco or other smoke-producing products.”

Previously, students who violated the smoking ban were notified by e-mail, but now in addition to the fine, a letter will be mailed to the students’ home.

Frequent violators may be asked to attend tobacco cessation programs.

Fitzgerald said students helped create the non-smoking policies and fines. If students do not want a non-smoking campus, they should speak up, he said.

“Our eyes and ears are open,” Fitzgerald said.

Some University of Miami students said they are unaware that e-cigarettes, including the increasingly popular JUUL, are included in the smoking ban.

Called the “21st-century cigarette,” JUUL is an alternative to traditional smoking, some students said. The small device, which resembles a flash drive, contains powerful amounts of nicotine and comes in four different flavors. Each pod inserted into a JUUL has 50 mg of nicotine, equivalent to one pack of cigarettes.

The Food and Drug Administration announced that teenage use of electronic cigarettes has reached “an epidemic proportion” and gave manufacturers two months to show how they will stop marketing to minors.

Most UM students, however, are over the age of 18 and some said they should be able to use the devices.

“I think people are well aware of how much nicotine they are consuming, and it is more of a choice than an influence,” said a female student who uses JUUL and asked not to be identified.