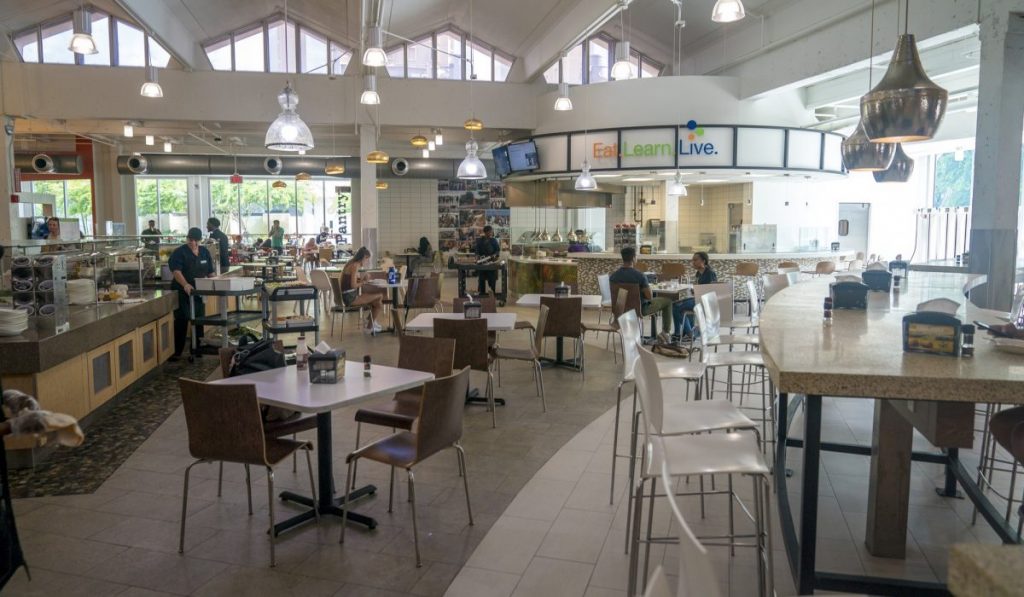 A TV monitor that displays next week’s dining options will prompt students to vote online for the dishes they want to be served. A social media wall consisting of multiple TV screens will display messages from dining services and student tweets, posts and photos in real time. And Amazon’s Alexa will be able to answer questions about campus dining locations.

These are some of the innovative changes University Dining Services is implementing this year.

Meagan Clements, the director of marketing and guest experience at Chartwells Dining Services at UM, said one of her main goals is to make eating on campus more fun and engaging.

“Everyone likes to be involved with what they’re doing,” Clements said. “They like things to be customizable. They like to really be a part of the process every step of the way.”

One of the most significant changes implemented so far is a partnership with Rockbot, an app that allows students to vote on which songs play in the dining halls.

People can download the app free of charge, check in to either of the on-campus dining halls and select the songs they want to hear.

Before Rockbot, administrators and employees chose what songs to play out loud in the dining halls. But now, students hold the power.

Since the beginning of the semester, Clements said around 60 users at UM have logged onto the app. Those people have checked in nearly 300 times and voted almost 900 times in total.

“It’s nice to get to play what you want,” said Stuart. “Because if you eat there all the time it’s like your second home. You might as well enjoy it.”

Clements said that dining services decided to connect with Rockbot after receiving surveys that indicated many students were dissatisfied with the dining halls’ music choices.

Dining services send out a survey to all UM students at the end of every semester. Clements said that she loves receiving feedback from guests because it tells her how she can improve.

In order to increase the amount of feedback they get, dining administrators also added a phone number for students to text with any questions, comments or critiques. Students can now text dining services at 305-376-7337 and receive an instant response.

Clements said that the texts go directly to her and three other administrators, who all discuss the appropriate response in a group chat. Once they’ve decided how to proceed, Clements replies to the text with any relevant information.

“It’s just another way for people to interact with us and for us to be more accessible to our guests,” Clements said.

Although they’ve only received a handful of texts so far, Clements said she thinks that this service will catch on once it’s advertised more in person and online.

Previously, students looking to share their thoughts had to fill out a form online or on the DineOnCampus app, but Clements said that texting expedites this process.

Although these are the only two changes currently in effect, dining services plan to roll out many more as the year progresses.

One of the biggest innovations will take place in the Hecht-Stanford dining hall, Clements said.

Her team plans to convert the “Eat. Learn. Live.” station to a student choice station, complete with a TV that displays potential dining options for the next week. Students will be able to vote online for which dishes they want to be served.

Junior Gabriela Beverly said she likes this idea because it gives students more of a choice in what they’re eating.

“It makes you want to eat here if you know that they’re going to take into account your feedback,” said Beverly, who is a nursing student.

“It’d be more comfortable to go there and know that you can eat this or that,” said Hall, who is a pre-med student.

“Guests want to feel acknowledged, heard and as if they are part of a bigger family,” Ross said.

Stuart said she is looking forward to the student choice station because having more options reminds her of home, where she can open the fridge and eat whatever she wants.

Clements said that she expects the new station to be up and running by January.

Additionally, dining services plan on adding a social media wall to the Hecht-Stanford dining hall that will display tweets and photos in real time, Clements said. It will consist of multiple TV screens, feature messages from dining services and spotlight posts from students who use relevant hashtags. The content will be filtered to ensure that nothing inappropriate ends up on screen.

Ross said that dining services want to integrate more technology into its facilities so that guests will have a better overall experience.

“We follow trends in not only campus dining but in generational preferences and technology as well, so we are always looking to find new and exciting initiatives to add to our program,” Ross said.

Other future technological amenities include touch-screen feedback kiosks in the food court and the Hecht-Stanford dining hall as well as a connection between Amazon Alexa and the DineOnCampus app.

The kiosks will allow guests to instantly share their experiences and Amazon Alexa will be able to answer questions about campus dining locations.

Many of the technological changes are taking place in the Hecht-Stanford dining hall first because it serves more students on a regular basis, Clements said. But, she also said she hopes to bring changes to the Mahoney-Pearson dining hall in the near future.

Clements said that she hopes all of these changes will give students a more individualized experience. She said that everyone dines differently and that her department wants to cater to everyone’s needs.

“We want you to be able to customize things,” Clements said. “We want you to feel comfortable in all of our facilities, so all of these are just additional ways to improve student lives.”

Beverly said she was excited to hear about all the changes coming to the dining halls and that she’s always impressed with dining services’ friendliness and responsiveness.