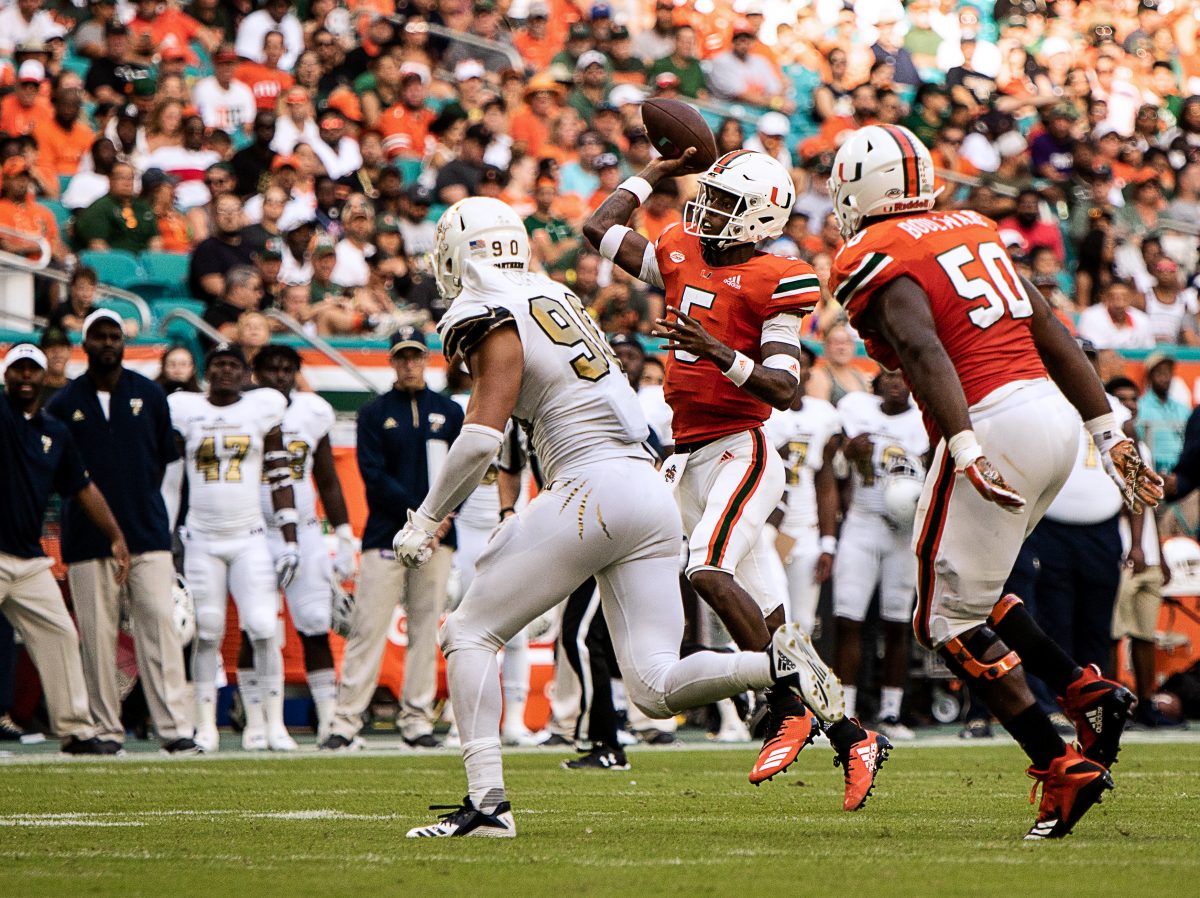 It was a given that patience with Malik Rosier’s inconsistent play was growing thin and that N’Kosi Perry would likely make an appearance in the backyard battle against Florida International University Saturday.

But perhaps, even some of the most disgruntled Hurricanes fans were surprised to see head coach Mark Richt pull Rosier from the game after just two offensive drives.

Richt’s timing turned out to be perfect.

Perry ignited the crowd from the moment he stepped on the field, both with his arm and his legs, throwing for 224 yards and three touchdowns while also rushing for 32 yards to lead Miami to a 31-17 win over the Panthers at Hard Rock Stadium.

“I’m always ready,” Perry said about coming into the game in the first quarter. “It just came natural for me.”

Richt said his plan all along was to put Perry in at quarterback on the third offensive drive to see what he could do – no matter the play of Rosier, who struggled to move the offense in his short stint of game action.

Regardless of the exact validity of the statement, it turned out to be the right call.

“Things went well, so we kept him in there,” Richt said. “I think he was comfortable. He threw some balls that were what I would call bullseyes. Mostly, I thought he was well aware of what he was doing and why he was doing it.”

There was simply a different energy inside the stadium with Perry – one that felt confident again. Despite throwing one interception on an arid deep throw, for the majority of the afternoon, Perry showed discipline and precision with his passes – completing 17 of his 25 throws.

“I feel N’Kosi really changed the way he was going about his business on and off the field,” Richt said. “It’s not like Malik has done anything wrong by any means, but the other guys are beginning to mature to the point where we want to see what they can do.”

Richt hasn’t confirmed if this means Perry has won the starting job, instead he will make the decision on a game-by-game basis, including for the matchup against North Carolina next week.

“We’re going to run with whoever I think gives us the best chance of winning, that’s who’s going to play,” Richt said. “Tonight, we thought it was N’Kosi.”

The matchup itself was no contest, despite a late rally by the Panthers when the Canes clearly had their reserve players on the field.

Miami (3-1) recorded 478 total yards of offense, dominating FIU (2-2), who is led by former UM head coach Butch Davis. The Canes’ offense featured lead running back Travis Homer, who rushed for 114 yards and a touchdown on 13 carries. Sophomore receiver Mike Harley had a breakout day, reeling in seven catches for 76 yards.

“I call it competitive excellence,” Harley said. “I came from a high school where everyone was a star, and if someone went down then the next man was up, so you know it was my time to shine. Opportunity came, and I seized it.”

Harley stepped in for UM’s leading receiver Jeff Thomas, who left the game with dehydration. The Canes were already without arguably their best receiver Ahmmon Richards, who has missed the past three games with a knee injury.

“We think he’ll be fine,” Richt said about Thomas. “We don’t think there’s any long-lasting effects, other than sometimes you get behind the eight-ball when it comes to hydration in this heat and humidity.”

The Hurricanes held the Panthers to just 187 total yards of offense, racking up 11 tackles for loss. Senior defensive tackle Gerald Willis III led the defense with three tackles for loss and a quarterback-hurry.

“We have a game in five days, which we are aware of, so when the script was written, we wanted to get the game out of hand,” defensive coordinator Manny Diaz said. “We wanted to play some of our guys who are backups because we know we are in this stadium again in five days against a really good opponent.”

Miami will have short rest until its next matchup against North Carolina, which is set for an 8 p.m. Thursday kickoff at Hard Rock Stadium.