Home » The State of the U is ‘strong and rising,’ Frenk says at first annual speech

The State of the U is ‘strong and rising,’ Frenk says at first annual speech 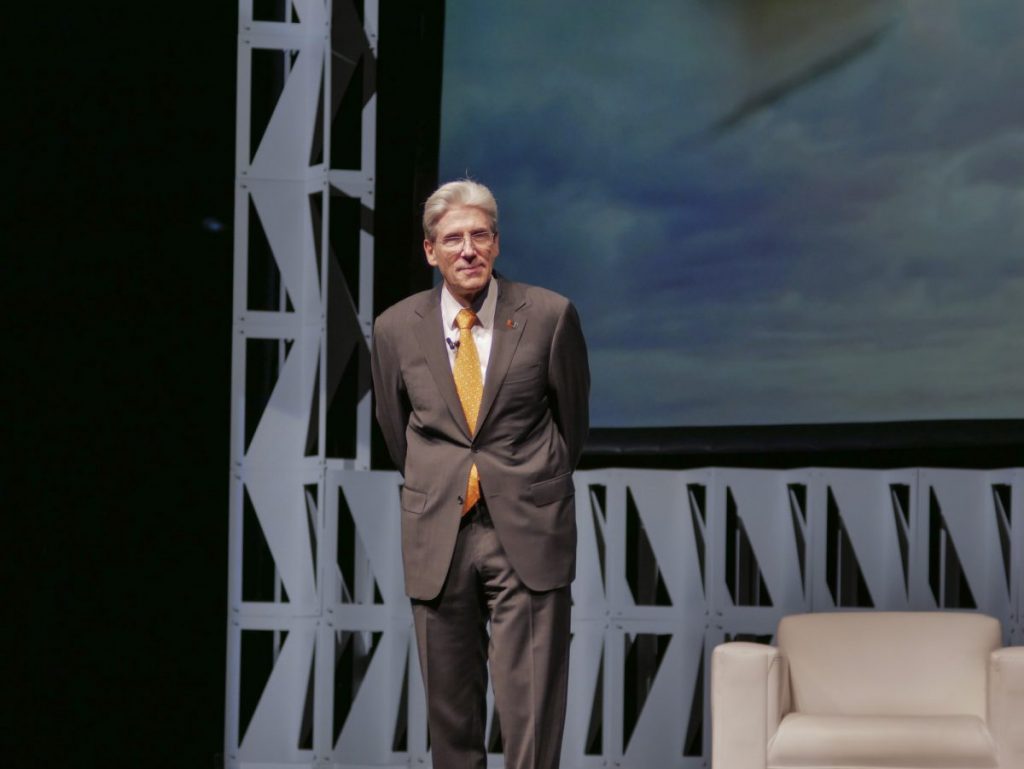 President Julio Frenk gives his first annual "State of the U" address at a town hall meeting Sept. 17 in the Watsco Center. Hundreds of students, faculty and staff gathered for the speech, in which Frenk laid out the details of his 10-year "Roadmap to our New Century." Photo credit: Cameron Tavakoly

As the University of Miami prepares to celebrate its centennial anniversary in 2025, President Julio Frenk is making big plans for the future of UM.

Frenk spoke to students, staff, faculty and other members of the UM community on Sept. 17 in the first ever “State of the U” address. In his speech, he laid out his goals for the university as it moves into its second century of existence.

“Today, the question before us is this: What will it take to become one of the top comprehensive research university in the United States?” Frenk said.

UM’s Board of Trustees recently approved the Frenk administration’s “Roadmap to our New Century,” an all-inclusive agenda that details how UM plans to improve its operations and become a leading research university.

Frenk said UM is at a pivotal point in its history, and that it’s important now more than ever to look towards the future.

“We have an unprecedented opportunity to become a university not just of Miami, not just of this country, but also of the world,” he said.

Frenk outlined his goals by emphasizing that there is absolutely no place for mediocrity in UM’s future.

“If I had to summarize in one phrase the North Star that will guide our rise to the top, I would say comprehensive excellence, selective preeminence,” Frenk said.

According to Frenk, this means focusing on five strategic priorities: mission-driven research, a preeminent academic health system, education for life, hemispheric leadership and a platform for success.

Frenk described each of these pillars, starting with mission-driven research. He said this point means that UM will strive to help solve society’s problems through knowledge, which he believes is the most powerful force for social transformation.

To accomplish this goal, Frenk said UM will work towards improving its STEM programs so that it can become a hub for scientific research in the Americas.

Frenk said the addition of a new quad of science buildings and the implementation of the “100 talents” program—which aims to bring on 100 new endowed faculty chairs in Frenk’s first decade—will allow UM to become a leading STEM research institution.

“Transformative research is our fundamental responsibility to the world,” Frenk said.

He also said that mission-driven research means going beyond the traditional scientific publication standards to translate research into meaningful opportunities for the local community.

Frenk also touched on the importance of building a preeminent academic health system.

He said that UHealth will lead the healthcare industry’s transformation by laying the groundwork for growth and innovation both locally and globally.

A major component of this innovation will be the establishment of more destination programs, Frenk said.

UHealth already boasts a number of award-winning programs such as the Sylvester Comprehensive Cancer Center, the Bascom Palmer Eye Institute and the Diabetes Research Institute, but Frenk said it’s important to create more destination programs that will attract patients from all over the hemisphere.

“By leading the transformation in health care, we will continue transforming lives throughout the country, the hemisphere and the world,” Frenk said.

Excited to get a first peek of the interactive exhibit at the very first @univmiami State of the University town hall meeting. See you soon! pic.twitter.com/nDvDRoPRwN

He then addressed the concept of education for life.

He said he wants to create a learning environment that sets students up for a meaningful, productive life while also allowing them to return to education throughout their careers.

Frenk said that two key components of these goals are learning through innovative technologies such as the simulation hospital at the Miller School of Medicine’s Gordon Center, and through implementing immersive learning strategies that span across multiple disciplines.

“Education is more than just filling your head with content,” Frenk said. “It’s about developing relationships and networks. It’s about being socialized into the values of a learning community.”

Frenk said that perhaps most importantly, he wants to establish UM as a purveyor of education that alumni can return to throughout every stage of their careers.

Frenk also stressed that UM’s location allows it to reach across national boards and act as a convergence point for North, Central and South America, in the interest of hemispheric leadership.

Frenk said that UM will work on facilitating a stronger exchange of ideas and personnel throughout the many regions within the Americas.

“By mobilizing our own talented faculty to translate more of their discoveries into development, we can make an incredible contribution,” Frenk said.

However, he also said UM has established itself as a local leader of the South Florida community.

“We’re a university of the city and of the region,” Frenk said. “That continues to be the case, and it’s very much in the ethos and the culture of our institution.”

According to Frenk, UM is the second largest nonprofit employer in Miami-Dade County, and it positively contributes to the economy through job creation. On a larger scale, he said that UM attracts talented faculty and students who live in South Florida and contribute to the general welfare of the community.

“There is not a single innovation hub in the world that doesn’t have a comprehensive research university at its core,” he said. “That is the role I want us to play.”

Frenk also discussed his plans to create a platform for success.

He’s working on building up the university’s infrastructure and supporting its people, he said, because it’s important to give faculty and staff the resources they need to accomplish great things.

Frenk said that doing so will improve the efficiency of UM’s entire operation, but will require a 50 percent increase in the university’s endowment over the next seven years.

Frenk also said that part of improving UM’s efficiency means increasing the diversity of its students and creating a platform for difficult discussions.

“True diversity means that everyone in a community feels valued and has the opportunity to add value,” Frenk said. “That responsibility sits with each of us and applies accountability for results.”

Frenk concluded his speech by assuring the audience that UM will endure in perpetuity as a one of the world’s top universities.

He said that although many aspects of life are fleeting, the knowledge that universities contribute to the world has always endured.

“I’m here to tell you that the state of the U is strong and rising, that we are well into our journey and that our institution’s brightest days are yet to come,” Frenk said. “Now is our time to soar.” 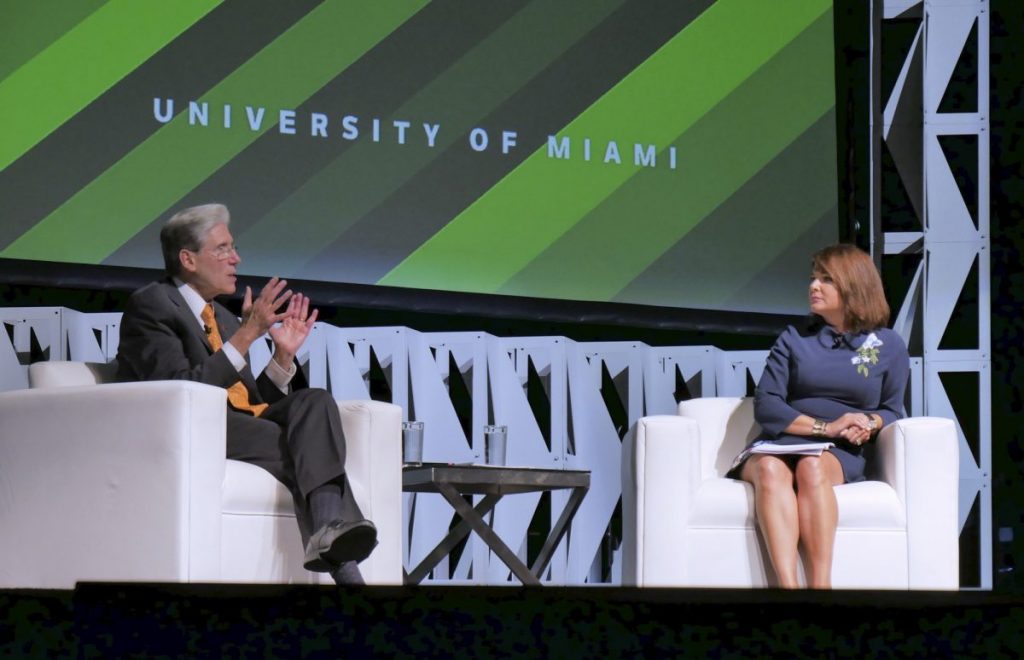 “Are you inspired by that?” she asked the audience. “I know I am. It’s great to be a Miami HSturricane today more than ever.”

During this portion of the program, Frenk said that the best part of his job is getting to interact with students.

“The most vibrant and dynamic part of our community is our students,” he said. “They are truly the future.”

Freshman Stephanie Ruiz said she really appreciates Frenk’s commitment to student interaction. She said she likes that he holds office hours and hosts events like the “State of the U” to open up a dialogue with students.

“He’s not like any president,” said Ruiz, an accounting major. “He tries to connect with the student body as much as possible. Not everyone in his position would do that.”

Ruiz said that like many other students, she looks up to Frenk.

“He always knows how to say the most motivational things and now I’m really excited to experience UM,” Ruiz said.

Overall, Ruiz said she was very impressed with Frenk’s speech, especially the amount of attention he devoted to discussing the research taking place at UM.

She said she’s glad to know that the university is dedicated to improving not only academic success, but also research opportunities.

Emily Gossett, a junior at UM and the student government chief of staff, said she was particularly interested in the idea of hemispheric leadership because UM’s unique location gives it a special vantage point at the crossroads of the Americas.

“I think that most universities are looking to the past and I like that we’re looking ahead,” said Gossett, who is double majoring in communication studies and sociology.

She said she respected UM administration for working so hard to connect with students and said that it’s always nice to get face-time with the president. 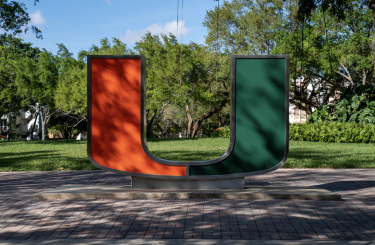