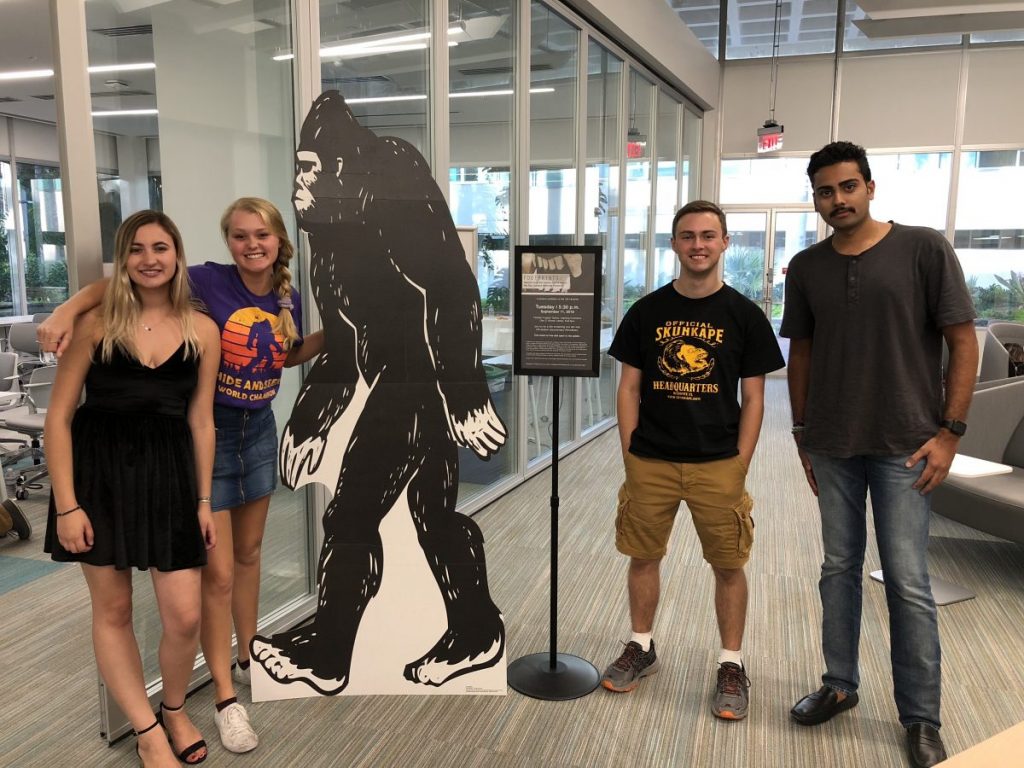 The legend of the Skunk Ape, a Bigfoot-esque creature rumored to lurk in Florida’s swamps, now graces the walls of Richter Library in an exhibit on student-produced documentary “Footprints.”

The exhibit, which opened on Sept. 11 on the library’s first floor, features an evidence board and stills from the 20-minute documentary.

“Footprints” details the myths surrounding the Skunk Ape, using testimony from archaeologists and witnesses, and sheds light on the communities of people still living in the Everglades – whose livelihoods depend on the popularity of the Skunk Ape yet continuously face threats to their job security.

“Rebekah and I had this crazy idea,” said Orstad, a senior broadcast journalism, political science and film major. “She found out about the Skunk Ape. She’d wanted to do this forever.”

Although the idea wasn’t accepted at first, after conducting more research, the students were able to start production. They said they had to search for their sources, including archaeologists and Skunk Ape witnesses, and cultivate relationships with them before securing interviews. 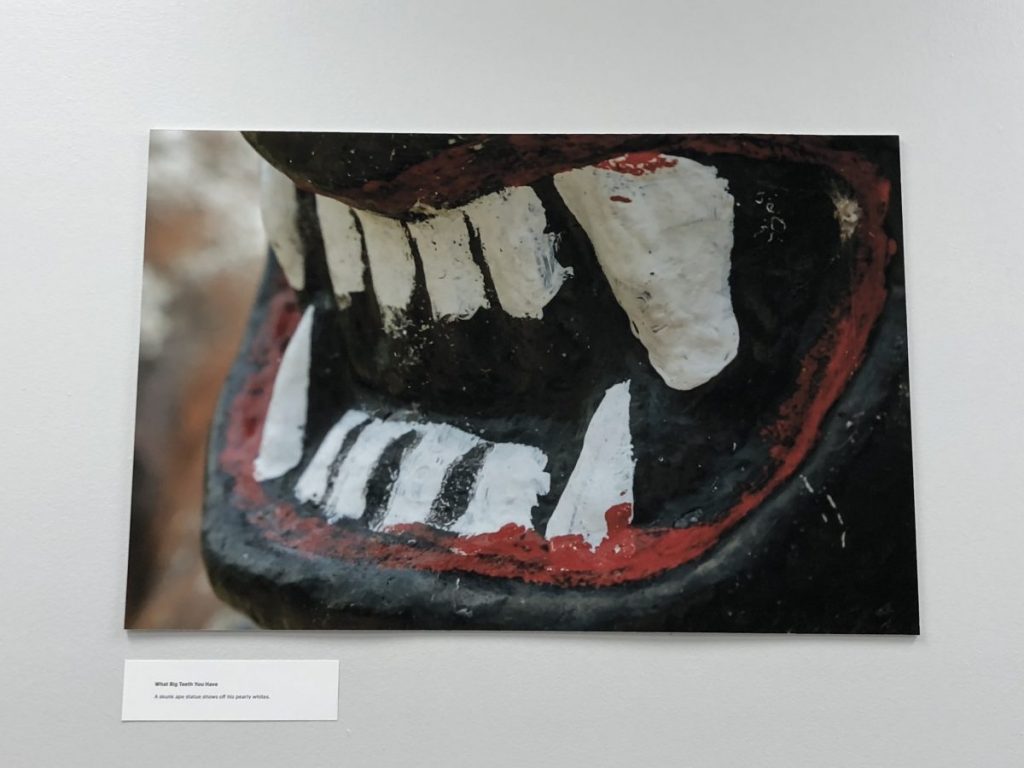 The Skunk Ape, a Bigfoot-esque creature with monstrous teeth rumored to live in Florida's swamps, is the subject of student-produced documentary "Footprints." Photo credit: Samantha Kamath

“Location was another challenge,” said Brown, a senior journalism and motion pictures major. “The Everglades were at least a two-hour drive. We really had to work it out between the eight of us.”

Even though they worked against many challenges, every student on the production team said they learned a great deal as well.

“It was a great thing to be working on,” said Sharma, a senior broadcast journalism major. “Working and learning about the culture was so informative to me.” 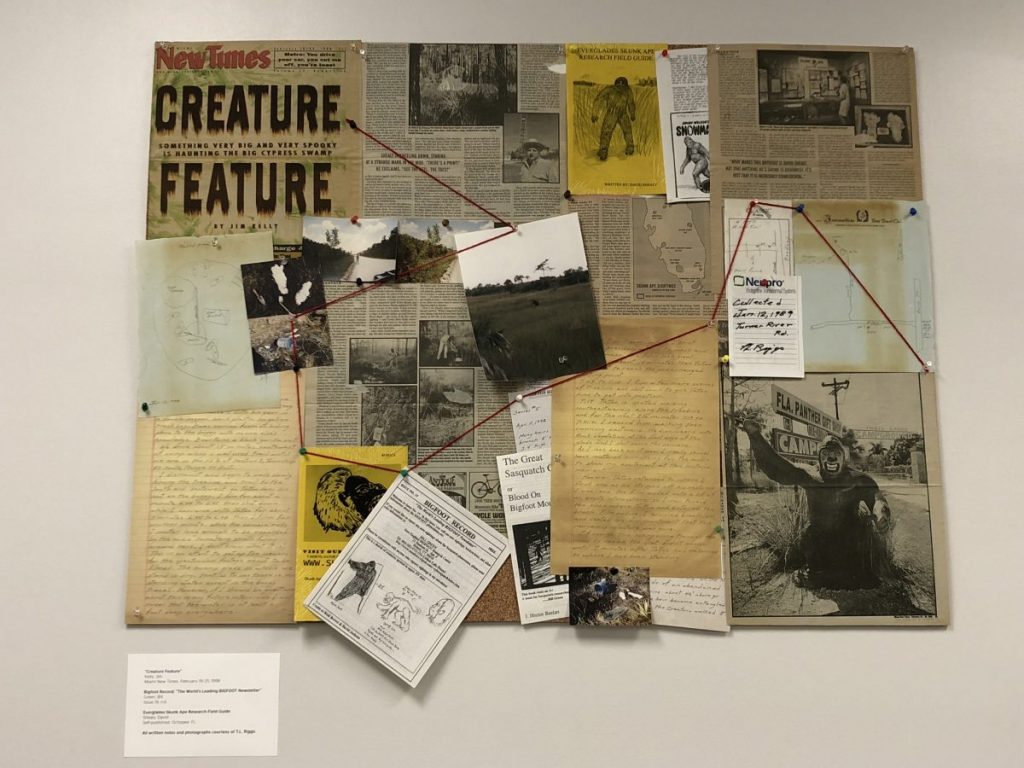 Among the pieces on display in the "Footprints" exhibit is an evidence board featuring newspaper clippings, handwritten notes and photographs of the Skunk Ape. Though the creature's existence is largely debated, the mythos surrounding it is a boon for communities in the Everglades, attracting tourists and indirectly promoting conservation efforts. Photo credit: Samantha Kamath

From starting the project in a documentary class last January to screening the movie at Cosford Cinema last May and showcasing it at the Richter exhibition, Orstad said she and her friends have been constantly polishing the project, sometimes working from 7 a.m. to 2 a.m. the next morning to finish the documentary.

The exhibit and screening, which have been in the works since June, were organized by the library’s event team and led by Creative Studio manager Vanessa Rodriguez.. The Creative Studio is a space for students to display their multimedia and audiovisual projects.

“I ask my staff to be on the lookout for new exhibits, so we can have a new one every semester,” Rodriguez said. “Having student-created exhibits is a great way to decorate the space with things that are not just aesthetically pleasing, but meaningful to the UM community.”

Rodriguez said she was personally invested in the documentary as well because Brown is one of her student workers.

“Once I saw the documentary, I became really excited about having an exhibit based on it, since I get particularly excited about subjects like cryptozoology,” Rodriguez said.

The student team said “Footprints” and the Skunk Ape are a way to bring attention to the concerns of remote Everglades communities, while Orstad said she hopes that this documentary will challenge audiences to question their own beliefs about the Skunk Ape, and understand and empathize with believers.

Brown said she hopes audiences take away the human aspect of the Skunk Ape mythology. “There’s the whole angle of the people living in the Everglades,” she said. “The Bigfoot is one element — that’s not what it’s about. It’s about the characters.”

The film, which was recently submitted to the Sundance Film Festival, has no definite dates yet for future screenings, although the team hopes to see it played again locally at the Miami Film Festival and the Cosford Cinema. The exhibit will remain in the Creative Studio for the rest of the semester.

The State of the U is ‘strong and rising,’ Frenk says at first annual speech
Sports Roundup 9/14-16