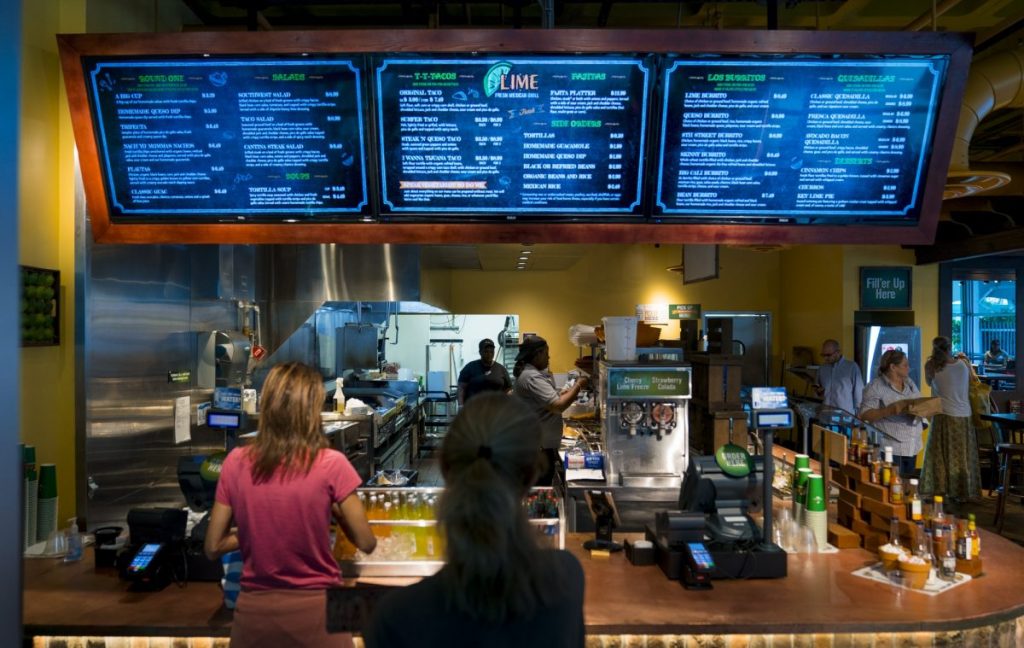 Students and faculty frequent the campus Mexican grill restaurant, Lime, for lunch hours throughout the school week. Now, Lime is extending their hours and is a late-night or weekend dining option. Photo credit: Hunter Crenian

Students can now enjoy burritos, tacos and other treats from Lime seven days a week. For the first time ever, the on-campus Mexican restaurant is now open Monday through Sunday from 11 a.m. to 10 p.m.

The change resulted from a special dining committee that formed last spring to explore options for the future Lakeside Housing Village.

According to Ana Alvarez, executive director of auxiliary services, the committee developed a survey to learn about students’ dining preferences and to gain suggestions for future options. In addition to the survey, they conducted a series of focus groups to gather additional feedback.

“There were certainly some themes that emerged beyond our interest in seeking ideas for future campus concepts and one of those was an interest in later dining options on weekends,” Alvarez said. “As we explored the idea, we better-understood students really enjoyed Lime, and that it made great sense to not only open it on weekends but keep it open later.”

“Our office worked with the university and our other vendors to make sure the variety of options available on nights and weekends was going to meet everyone’s needs,” Clements said. “This process had been spoken about for some time, but we worked diligently over the summer months to bring it to fruition.”

Alvarez said that an average of 380 guests is served each Saturday and Sunday. According to Clements, strong sales numbers each weekend and positive feedback from students show that Lime’s new working hours are beneficial for everyone.

Jenna Weiss, a sophomore honors communication major, said she usually eats at Lime once a week or once every two weeks.

“I know last year there were no places open on campus over the weekends besides the dining hall and Subway, so Lime definitely gives people more options,” Weiss said.

For junior Mateo Cardona, a biochemistry major, the change in on-campus dining was also very exciting. He said that he was disappointed that Lime wasn’t opened during the weekends last year, so now he’s happy with the extended hours.

“Especially at night, people didn’t have many dining options, but now with Lime open later, people have another place to eat,” said Cardona.

“The Special Dining Committee on Lakeside Housing Village will regroup this fall to continue to discuss ideas for future retail concepts on campus,” she said.