Pilot tailgating policy aims for compromise between students and administration 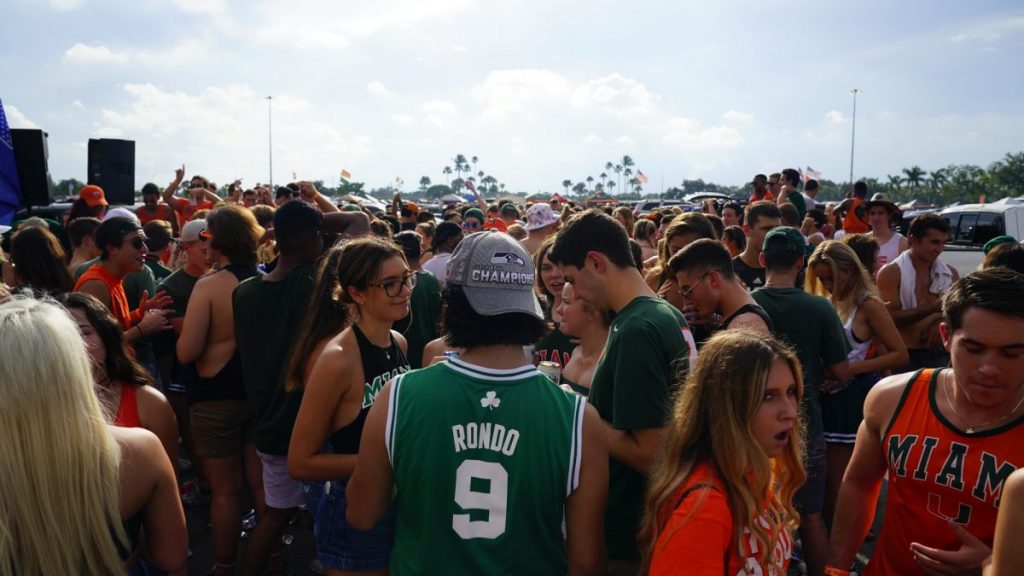 On the heels of much-debated tailgating policy changes during the 2017 football season, University of Miami administration and a student task force will test new policies that promise both student safety and an enjoyable tailgating experience.

The pilot program, easing back from the total ban of student organization tailgates in Lots 9 and 10 at Hard Rock Stadium, introduces 20 dedicated spots closer to the stadium’s entrance and the university-sponsored Student Fan Zone.

“The idea is that because a lot of students will be there now, they’ll be far more likely to use Fan Zone, which provides food and non-alcoholic beverages,” said Senior Associate Dean of Students Steven Priepke. “Over in the fraternity tailgate area, there will still be an EMT and stuff like that,” he said, but student organizations wanted to be closer as well. The new arrangements make it easier for everybody.

Discussion of a new policy started in spring 2018, when Dean of Students Ryan Holmes started putting together a task force of student leaders to help administrators decide what changes could be made.

Student Government, Category 5, United Black Students and the Association of Greek Letter Organizations were among the student orgs represented in the task force.

Students met during the first three weeks of the semester with Holmes, Priepke and Dean Cristina Luna, said AGLO Chair Jacob Haaker. “I think it’s going to go well because we came up with a plan throughout the spring and summer that the administration agreed to, and basically the plan was what we got.”

In addition to providing the new locale for fraternity and student org tailgating, the university is expanding on its existing game-day shuttle service between the Coral Gables campus and Hard Rock Stadium, over 20 miles away. Last year, students could board shuttles at Stanford Circle starting three hours before kickoff, but many fraternities booked their own transportation from house parties on San Amaro Drive—or frat row—using privately rented school buses.

The new plan offers a similar university-sponsored shuttle service for students attending approved tailgating parties on frat row, also beginning three hours before kickoff. However, students only have 30 minutes to line up for the shuttles at Lot 721, behind the Lambda Chi Alpha house, before doors close and stragglers are sent to Stanford Circle instead.

“The hope is that we eliminate the off-campus fraternity house parties and the yellow school buses,” Priepke said. “The yellow school buses, I think everybody has recognized, present the most risk in terms of safety—with just how they load them up and then consuming alcohol underage on the bus as well, which is not a good scenario.”

This weekend’s opening home game against Savannah State will be a gauge of the program’s success, said Haaker, a senior finance major.

The tailgating updates coincide with the first run of a new student ticketing system, spearheaded by the athletics department, which requires students to reserve tickets online ahead of the game. More than 4,000 online reservations have been made for Saturday’s game, Priepke said, which could be a good test for the new tailgating procedures in comparison to last year’s.

“I get it—for the kids who wanted to go for a great party experience, they were turned off. For the kids that wanted to go see great football, they were mostly turned onto it for most of last year,” Pripeke said. “But I think a lot of people will be interested in this pilot for the first game, trying to figure out ‘Is this the party we want? Do we want to be a part of this?'”

“Usually fraternities don’t pair up to tailgate, but now they are, and we’re trying to make sure everyone has a good time,” Haaker said. “Yeah, we’re all students, we like to drink, we like to have a good time, but we also make sure that Canes care for Canes. We want to be safe out there.”